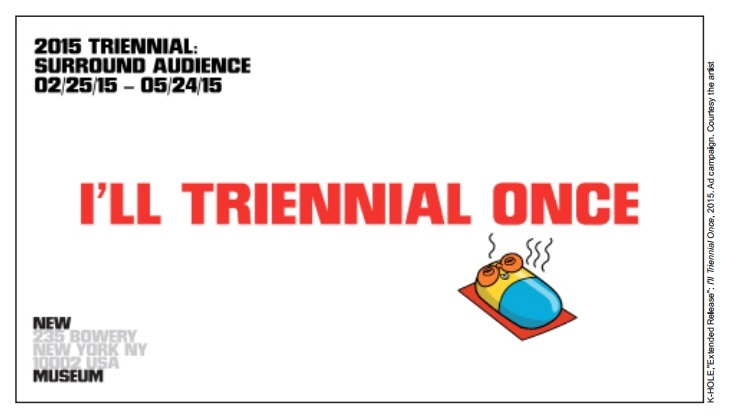 at the New Museum

A signature program of the New Museum, the Triennial is the only recurring international exhibition in New York City devoted to early-career artists from around the world. It provides an important platform for an emergent generation of artists that is shaping the discourse of contemporary art. The 2015 Triennial is organized by Lauren Cornell, Curator at the New Museum, and iconic artist Ryan Trecartin, who was featured in the inaugural 2009 Triennial. This third iteration of the Triennial is titled “Surround Audience” and will feature fifty-one artists and artist collectives from over twenty-five countries; for many of the participants, this will be their first inclusion in a museum exhibition in the United States. The exhibition will encompass a variety of artistic practices, including sound, dance, comedy, poetry, installation, sculpture, painting, video, and one online talk show. “Surround Audience” is inspired in part by Trecartin’s own artistic practice, which, as Cornell describes, “vividly manifests a world in which the effects of technology and late capitalism have been absorbed into our bodies and altered our vision of the world.” A tension between the newfound freedoms and threats of today’s society animates and anchors the exhibition: We are surrounded by a culture replete with impressions of life, be they visual, written, or construed through data. We move through streams of chatter, swipe past pictures of other people’s lives, and frame our own experiences as, all the while, our digital trails are subtly captured, tracked, and stored. “Surround Audience” explores how artists are currently depicting subjectivity, unpacking complex systems of power, and claiming sites of artistic agency.