Some of the notables within this group include: NY State Assembly member Jeffrey Dinowitz; Consul General of Israel in New York Ambassador Dani Dayan; Israeli Minister of Culture and Sport of Israel Miri Regev and NYC 10th District Council Member Ydanis Rodriguez amongst others.

The parade is produced in partnership with the UJA-Federation of New York and the Consulate General of Israel in New York. This year marks its 54th Anniversary here in our city.
Witnessing on this overcast day were the hundreds of thousands of spectators taking in all the many wonderful smiles put forth by marchers. At some points the scene was a mesmerizing one with the occasional sea of beautiful blue and white flags, each featuring the Star of David.

70th Anniversary of Israel’s Statehood this year of 2018 as illustrated on this passing float.

This year’s creative theme was “70 and Sababa (70 & Awesome)!” in honor of the 70th Anniversary of Israel’s statehood. The Israeli date of independence took place in May, 1948. 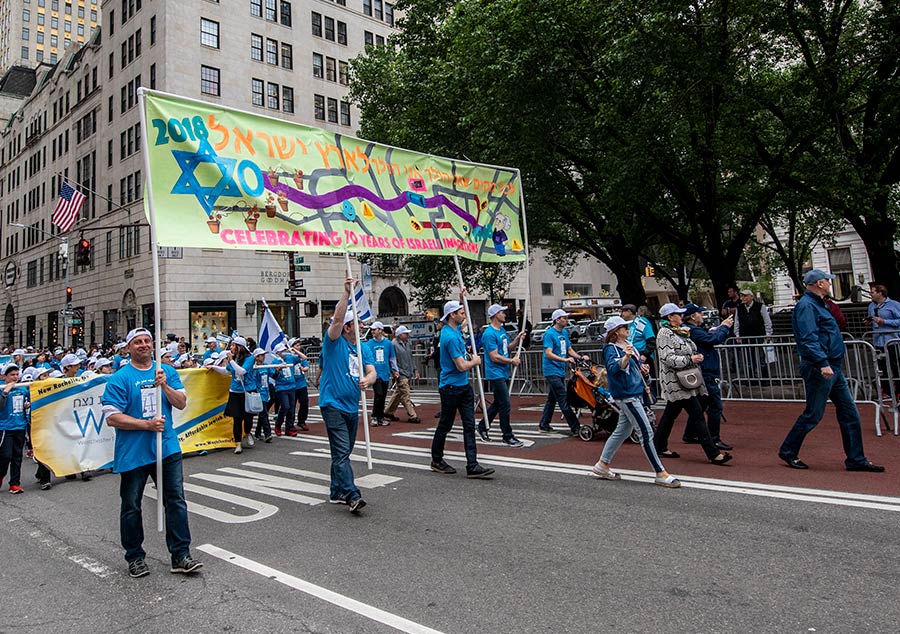 Some of the participating entertainers include: Ninet Tayeb, Omri Anghel, Kosha Dillz, National Yiddish Theatre Folksbiene’s Fiddler on the Roof, Yarden Klayman, Six13, SOULFARM , and Milk & Honeys.
As per the organizers:
“The Parade is the largest public event celebrating Israel in the world highlighting Israel’s rich heritage, vibrant culture, and the positive impact the Jewish and democratic state of Israel has on the lives of people around the world.” 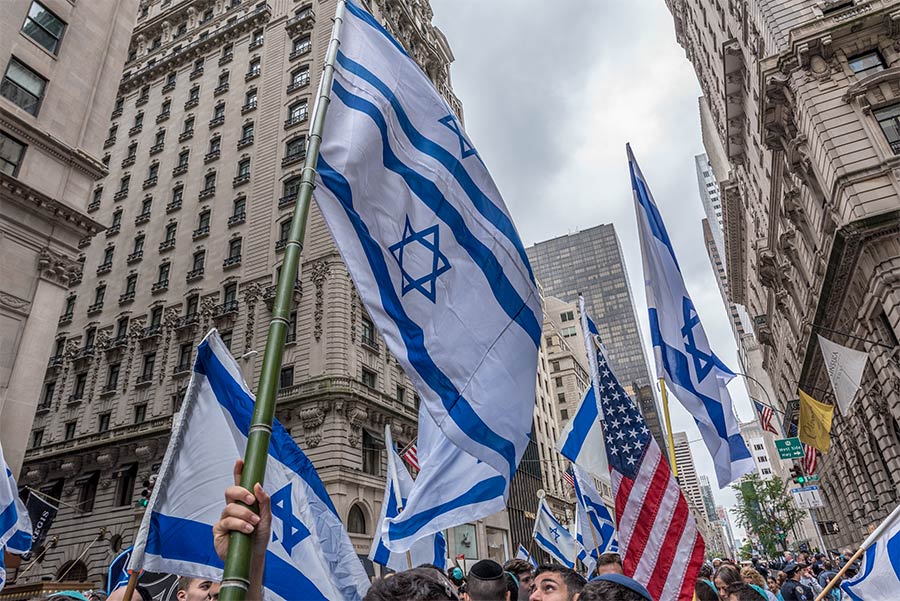 Grand Marshals are as follows:
Grand Marshals Dina and Jonathan Leader – Dina and Jonathan Leader’s public life is totally focused around Judaism. Some of their accomplishments include creating Project Empowerment to help Russian-Jewish families who lost kin in 9-11; being the founding funders and organizers of the Hillel National Basketball Tournament at the University of Maryland; creating and funding the Leader Family Food Pantry at the Shorefront Jewish Community Council in Brooklyn; creating the Leader Family Scholarships for Jewish students at Yale University and the CUNY Hillels; and supporting myriad organizations in Israel including HaShomer Chadash, Green Horizons, and others. The Leaders have alternated as Board members of the Jewish Community Relations Council of New York for over twenty five years.
Honorary Grand Marshal Jonathan Lipnicki – Lipnicki is an American actor and producer who got his start at the age of six in Jerry Maguire alongside Tom Cruise and Renee Zellweger. Lipnicki went on to take leading roles in Stuart Little 1 and 2, Like Mike, and The Little Vampire. Lipnicki’s acting career has continued as he has dedicated his time to many independent films. Most recently, he appeared on TBS’s Drop the Mic, ABC’s Battle of the Network Stars and the 2017 horror film, Circus Kane. A Los Angeles native, Lipnicki competes as a brown belt in Brazilian Jiu Jitsu. He returned from his Birthright Israel trip last August where he was honored as the 600,000th participant.

Honorary Grand Marshal Siggy Flicker – Siggy is a renowned motivational speaker, relationship expert, TV personality, and author. Siggy is known for sharing her inspirational message of #KnowYourWorth, self-assurance, and empowerment. She credits her strength to her Israeli born roots and is a staunch supporter of Israel and the Jewish community. As daughter to Dr. Mordecai Paldiel, scholar and Holocaust Survivor who ran the division of the Righteous Among the Nations at Yad Vashem, Siggy understands the importance of education for peace, love, and tolerance and the vitality of standing up to evil, tyranny, and anti-Semitism.
Honorary Grand Marshal Eyal Shani – Shani is a self-taught chef whose culinary passion was first instilled in him by his grandfather, an agronomist and a dedicated vegan. He opened his first restaurant “Ocianus” in 1989 in his home town of Jerusalem, where he developed a unique culinary language based on regional Mediterranean products. In 1999, a second branch of “Ocianus” was opened in the seaside town of Hertziliya and the rest, as they say, is history. In 2004, Shani starred in the TV series, “Food for Thought,” side by side with Segal. In 2008, together with his partner Shahar Segal, Shani opened the “Salon” in Tel Aviv. Since then, he is the leading chef of 13 highly successful restaurants under the group named “The Better Guys” including 7 branches of Shani’s “Miznon” restaurant with locations in Tel Aviv, Paris, Vienna, Melbourne and the latest Miznon in Chelsea Market NYC opened January 2018.

Honorary Grand Marshal Lipa Schmeltzer – Lipa is a singer, entertainer, and artist within Hasidic as well as modern Jewish communities worldwide. He is well-known for his music, entertainment, and activism. He has released many blockbuster albums and music videos and has performed at numerous venues in Israel and around the world, including Madison Square Garden, Town Hall, and even in front of President Obama at a party at the White House. In 2009, he founded the Airmont Shul, where the only requirement is acceptance to all. Lipa is now active in recording new and upcoming artists. He is also working on a book of poetry in conjunction with Americare Home Care, to give the remaining Holocaust survivors a chance to speak their minds. At a late age, he went to school for secular education and graduated with honors from Columbia University in May 2018.

Honorary Grand Marshal Liel Leibovitz – Liel is a senior writer for Tablet Magazine and a co-host of its popular podcast, Unorthodox. He is also the author or co-author of seven books, including, most recently, A Broken Hallelujah: Rock n’ Roll, Redemption, and the Life of Leonard Cohen. A native of Tel Aviv and a veteran of the Israel Defense Forces, Liel lives in Manhattan with his wife Lisa, a senior editor at Scholastic, and their two children.

Additional photos taken during this parade: