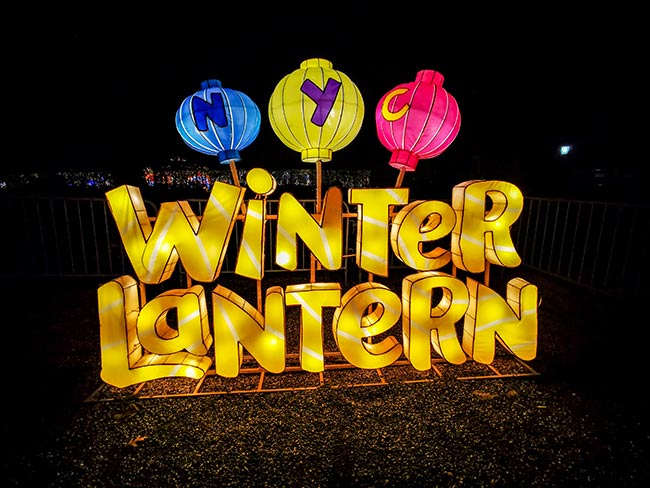 Photos can be found at near the bottom of this page

What’s colorful, brightens up the night air and puts a smile on near everybody’s face? The Winter Lantern Festival (nycwinterlanternfestival.com) of course!
Having begun in late 2018 this wonderful fest at the Snug Harbor Cultural Center & Botanical Garden is back for its second outing.  This grand Staten Island attraction features dozens of installations comprised of lit up sculptures coming in all sorts of sizes. During our tour of the grounds we got to see all sorts of representations of wildlife, sea life, plant life as well as pagodas and other objects. There was, as well, a section dedicated to the Jurassic period.
Kids of all ages are sure to get a thrill, as we did, out of the tigers, giraffes, koala bears, hippos and more! Heck, the dinosaurs, wooly mammoths and whales were a thrill to see all on their own.
There’s also a skating rink, eats for sale along with nightly performances.
Regardless of how serious you are about photography you’d regret not bringing your camera along. With the way these lanterns are lit it’s mighty hard to get a bad photograph with the most modern of smartphone cameras.
As for you more dedicated photographers, yours truly came close to leaving his DSLR at home figuring it might not be worth the trouble of trying to get long exposure shots.  I was wrong. There was no need to push the ISO too far up the scale and I was able to easily get by with a shutter speed as little as 1/250 second. That, mind you, was at an aperture range from 1.8 to 2.2 . So, even with smaller apertures one probably wouldn’t have to go too far in the way of shutter speeds and ISO. A steady enough hand should suffice methinks.
On another note, there’s the matter of getting there. I love to take my car everywhere and travel was the number one thing that kept us from visiting in 2018 when the festival first opened. The distance wasn’t as much a factor as was the high toll price of crossing the Verrazano Bridge. As of this writing it’s the most expensive in the country.
Little did we think about the other option.
Enter, the beauty of traveling on the Staten Island Ferry. It’s free! Plus, there’s a free shuttle that’ll transport you between the Ferry Terminal and Snug Harbor Cultural Center every 20 minutes. The only problem (and it was a big enough one) was finding the dang spot for the bus. Outside the terminal, next to the new Empire Outlets mall, are buses galore taking you along various routes within the borough. Not too far from the taxi-stand island is where you’ll find the coach-styled waiting for folks to board. Yet, you’ll see it only if happens to not be out transporting people. There IS a small sign but, even then, it wasn’t easily observable. Throw in how one police officer directed us to a spot that was far from where we should have been. To add to all this, upon our departure from the festival, we stumbled upon a couple waiting for free shuttle outside Snug Harbor. They shared their story of having to take a cab to the festival because they couldn’t find the bus themselves. So keep all of this in mind.
We suggest showing- up early enough before your scheduled visit so’s to allot for any troubles you might have in getting there.
All in all we’d highly recommend this venue. It’s a worthy visit folks should experience at least once in their lives.
The show continues on through January 12, 2020.
The following is a photo gallery of images taken on December 4, 2019. Mixed within are photos taken with the Huawei P30 Smartphone as well as the Nikon D750 w/ Nikkor 20mm lens.