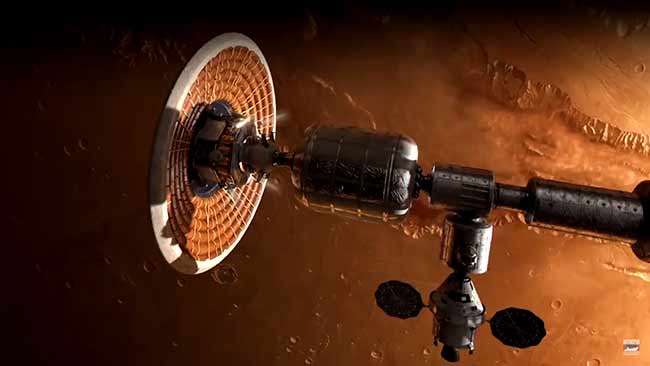 Aircraft Carrier: Guardian of the Seas and Journey to Space will begin showing in Lutnick Theater today

NEW YORK (March 18, 2019) – The Intrepid Sea, Air & Space Museum, in partnership with Flight Avionics of North America, today debuted two 3D films in the Museum’s Allison & Howard Lutnick Theater. The 25 minute films, entitled Aircraft Carrier: Guardian of the Seas and Journey to Space, will be in rotation during Museum hours with the first showing at 10:30am daily. The Lutnick Theater’s current film, The Story of Intrepid, will show prior to each 3D movie and can also be viewed in the Museum’s hangar deck throughout the day.
Tickets for the 3D movies are available in the Museum’s box office and at the entrance to the theater for $7; Museum members can purchase tickets for $4.
The new content and experiences are part of upgrades and enhancements to the 243-seat Lutnick Theater that allow for 3D capabilities.

Aircraft Carrier: Guardian of the Seas

The mission to protect and defend the world’s oceans has become far more complex and challenging in recent years, and naval aviation has become increasingly vital to success. One of the greatest engineering feats in history, the modern U.S. nuclear carrier is a masterpiece of technology, and the flagship of the fleet. With RIMPAC, the world’s largest and most comprehensive international maritime training exercise providing a stunning visual context for the story, find yourself aboard the carrier alongside the 5,000 highly skilled sea and air personnel conducting flight operations in the midst of the simulated war exercises taking place there.

NASA’s next era will be its greatest yet. Journey to Space showcases the exciting plans that NASA and the space community are currently working on and the challenges they must overcome to carry out audacious missions such as landing astronauts on Mars and capturing asteroids. The film features interviews with astronauts Chris Ferguson, commander of the final Space Shuttle mission, and Serena Aunon, a new astronaut chosen for future flights and narration by film and television legend Sir Patrick Stewart. Journey to Space helps put into historical context, the magnificent contributions made by the Space Shuttle program and its space pioneers.

The Intrepid Sea, Air & Space Museum is a nonprofit, educational institution featuring the legendary aircraft carrier Intrepid, the space shuttle Enterprise, the world’s fastest jets and a guided missile submarine. Through exhibitions, educational programming and the foremost collection of technologically groundbreaking aircraft and vessels, visitors of all ages and abilities are taken on an interactive journey through history to learn about American innovation and bravery.
The Intrepid Museum fulfills its mission to honor our heroes, educate the public and inspire our youth by connecting them to history through hands-on exploration while bridging the future by inspiring innovation.