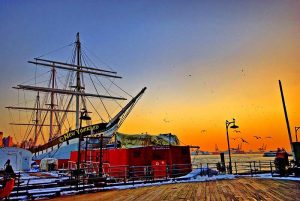 South Street Seaport Museum’s monthly sea-music event, Sea Chanteys and Maritime Music, continues virtually on Sunday, January 3, 2021 at 2pm ET. From our living rooms and kitchens join a round-robin of shared songs featuring members ofThe New York Packet and friends. Listen in, lead a song, and belt out the choruses for your neighbors to hear on the first Sunday of every month. The event is FREE. Sign up here to receive the Zoom link 24 hours prior: southstreetseaportmuseum.org/chanteysing/.

After years of meeting in person on the historic tall ship Wavertree, the event moved online in April 2020. Now in its ninth month of virtual incarnation, South Street Seaport Museum’s Virtual Chantey Sing has evolved into the preeminent virtual chantey sing in the world, featuring professionals and amateurs, old salts and new initiates, from across the street, across the country, and across the pond.

Old-time sailors on long voyages spent months living together in close quarters with no outside entertainment, no new people to interact with, a monotonous diet, and each day pretty much just like the day before. How did they keep their spirits up? Singing together! Work songs and fun songs, story songs and nonsense songs, songs of nostalgia and songs of up-to-the-moment news – all were part of the repertoire onboard. At South Street Seaport Museum, the Chantey tradition lives on. January’s event will be moderated by Deirdre Murtha of The Johnson Girls and The New York Packet, a collection of traditional chantey singers in the New York area.

The New York Packet was established over 30 years ago as the official maritime singing group of South Street Seaport Museum. First singing on the iconic vessel Peking, they have endeavored ever since to keep chantey singing alive in lower Manhattan. Even when the Seaport encountered “heavy weather” during and after hurricane Sandy, the Packet found places to fill with sound while awaiting a return to their beloved ships at the Seaport. In May of 2019, the moment came when the Packet could return and sing aboard
Wavertree. It was a magical and welcome moment.

About the South Street Seaport Museum
The South Street Seaport Museum, located in the heart of the historic seaport district in New York City, preserves and interprets the history of New York as a great port city. Founded in 1967, the Museum houses an extensive collection of works of art and artifacts, a maritime reference library, exhibition galleries and education spaces, working nineteenth century print shops, and an active fleet of historic vessels that all work to tell the story of “Where New York Begins.” www.southstreetseaportmuseum.org

During the discussion, you will get to know the fascinating characters who participated in Operation Zebra – the little-known story of World War II aviators who risked their lives and freedom in 1947-49 to prevent what they viewed as an imminent second Holocaust. The heroes include the Jewish James Bond, Yehuda Arazi, the operation’s chief pilot Sam Lewis, and its flight instructor Elynor Rudnick. Meet Arazi’s grandson and Lewis’ daughter, as well as Boaz Dvir, who captured the story in the 2015 award winning PBS documentary A Wing and a Prayer and the 2020 critically acclaimed book Saving Israel.