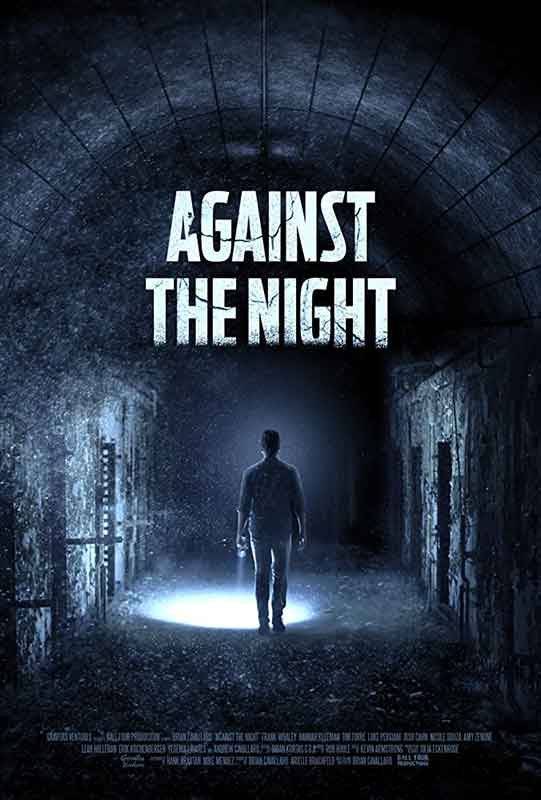 In LA, NY And Additional Select Cities on September 15, 2017

With presumably a limited budget and a cast of 10 primary characters, Brian Cavallaro has managed to craft a tension filled ride of a film.

The story, in a nutshell, has a group of friends enjoying a cozy night with some drinking and light party games. Hank (played by Luke Persiani) convinces them all to join in his photographic outing in a supposed hunt for ghosts at the local abandoned prison. They all agree to go, and deadly havoc ensues.

Cavallaro, who wrote and directed ‘Against the Night’ does a fine job of stirring up the fear through the characters’ interactions. With the occasional jarring jolts and random scares amidst all the darkness, the filmmaker creates quite the frightful environment; one in which the greatest terror-seeking viewer amongst us could appreciate.

Now don’t get me wrong. The film was neither a display of sheer perfection nor will it get any awards, since most films these days aren’t; but if it’s a sign of what’s to come from Mr. Cavallaro’s future filmmaking endeavors then I’m all ears and eyes!

As for the actors? They did as fine a job as could’ve been expected and felt convincing in their respective roles. However, let’s not forget the greatest role of all. The prison itself. The actual prison in which the tale took place.

If you look into Holmesburg Prison’s history you’ll discover quite a bit. The institution’s near 100 year history was a collection of real life horror stories. From scientific testing on inmates through the use of pharmaceutical products and biochemical substances; to the documented cases of rapes which numbered in the hundreds; to the broad range of other horrors inflicted upon them, this prison’s a goldmine in the way of cinematic material. There’s no wonder why Hank thought of seeking out ghosts.

I can’t help but imagine Brian Cavallaro following this film up with a sequel and possibly exploring some of that history. There ARE a few references to the prison’s past; and there is, as well, one discovery by a couple of the characters which hints at the film’s twist of an ending. A surprise that was highly welcomed by yours truly.

Keep in mind that other films have as well filmed there. On Amazon you’ll find a number of books based on the prison itself.

All in all I give this film and its creator a thumbs up for the effort in trying to explore new paths in the world of horror films.

The official site for Against the Night is here…