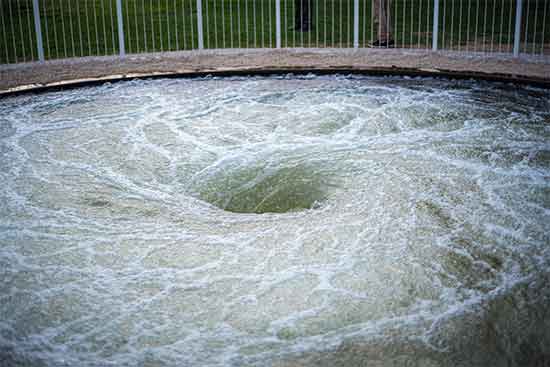 An endless wave at Brooklyn’s Pier 1

Admittedly I’m a little late to the game but better late than never right? What I’m talking about is Anish Kapoor’s installation, Descension,  at Brooklyn Bridge Park’s Pier 1. Tried as I might have so many times since it’s opening I always managed to get there after it was closed off for the day; but there’s still time, as of the this writing, for you to pass by and take in its mesmerizing flow.

Hailing from Britain is 63 year old Mr. Kapoor is an extraordinarily renowned sculptor who’s received numerous awards and recognitions; amongst which is the Genesis Prize for which he was awarded $1 million.

According to the related page: “Mr. Kapoor plans to direct his $1 million award towards helping alleviate the ongoing Syrian refugee crisis and focus on expanding the Jewish community’s engagement in a global effort to support refugees.”

In 2013 he was knighted by Queen Elizabeth II of England for his services to the Visual Arts.

The installment, which opened up on May 3, 2017 is expected to close on September 10. So if you happen to be in the area then I’d recommend a visit. It’s right off of Fulton Landing at the Park.

Here’s a quick video of Descension taken during our visit to the park; and you can visit this other related page at the Public Art Fund.

Below would be the the placard detailing the installation followed by the worded inscription upon it. 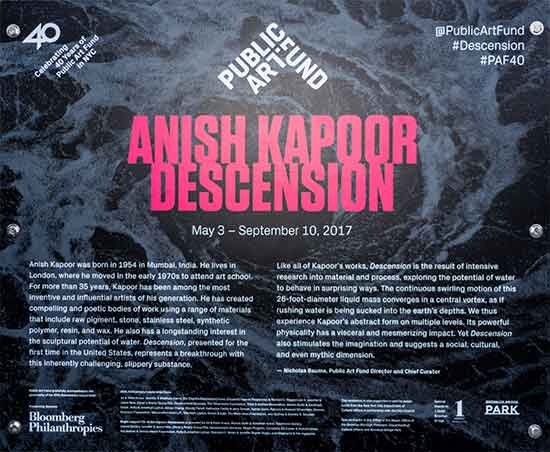 What the adjoining placard says:

Anish Kapoor was born in 1954 in Mumbai, India. He lives in London, where he moved in the early 1970s to attend art school. For more than 35 years, Kapoor has been among the most inventive and influential artists of his generation. He has created compelling and poetic bodies of work using a range of materials that include raw pigment, stone, stainless steel, synthetic polymer, resin, and was. He also has a longstanding interest in the sculptural potential of water. Descension, presented for the first time in the United States, represents a breakthrough with this inherently challenging substance.

Like all of Kapoor’s works, Descension is the result of intensive research into material and process, exploring the potential of water to behave in surprising ways. The continuous swirling motion of this 26-foot-diameter liquid mass converges in a central vortex, as if rushing water is being sucked into the earth’s depths. We thus experience Kapoor’s abstract form on multiple levels. Its powerful physicality has a visceral and mesmerizing impact. Yet Descension also stimulates the imagination and suggests a social, cultural and even mythic dimension.