MEN AND WOMEN COME TO GRIPS IN NY FINAL SHOWDOWN!

Over 100 men and women are expected to compete for the chance to be crowned Empire State Golden Arm Champion. There are 14 weight class categories for men and women. Contestants should weigh-in and register between 9:30 A.M. and 12:45 P.M. The day’s strongest arm MVPs — the overall male right and left hand winners—will receive cash prizes of $100. The day’s strongest women will receive awards, and first, second and third place awards are given in each pro and amateur weight class. 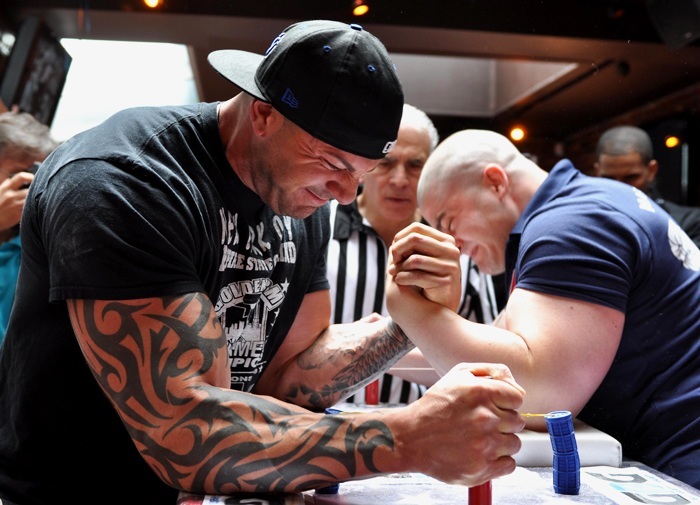 “The Empire State Golden Arm Tournament of Champions is New York City’s oldest and most prestigious sought-after title,” said Gene Camp, founder and president of the New York Arm Wrestling Association (NYAWA). “This event as the culmination of the 2013 NYAWA season is going to be a very exciting to watch because it is loaded with top talent locally and from all over the tri-state area and far beyond.” The Empire State Championship is the finale of the multi-event New York Golden Arm Series.

Some of the city’s best arm wrestlers are expected to compete, among them, the winners of the prestigious NYC Big Apple Grapple International’s King and Queen of Arms titles, Mike Ayello from Deer Park, LI, and Ana Kenah from New Jersey. The 2012 Empire State Champions will also return to defend their titles in this multi-talented high profile arm wrestling event. Contestants and teams are expected from as far away as Russia, Brazil and Turkey.

For information about the Empire State Golden Arm Championships, visit the NYAWA website at nycarms.com or call 718-544-4592