“Facebook used an open first close later strategy to stop competitive threats – where it would first open its platform to apps created by third party developers. This increased functionality on the site and subsequently increased the number of users on Facebook and then, Facebook abruptly cut off apps viewed as a competitive threat. Some of these companies experienced almost overnight drop off in user engagement and downloads, and their growth stalled.

They also sent a clear message to the industry, “Don’t step on Facebook’s turf or,” as one industry executive put it “you will face the wrath of Mark.” Referring to Facebook founder, CEO, Chairman and controlling shareholder Mark Zuckerberg. “

Below is the video of the Attorney General’s press conference held this afternoon followed by an official release provided by her office.

NEW YORK – New York Attorney General Letitia James today filed a lawsuit against Facebook Inc., alleging that the company has and continues today to illegally stifle competition to protect its monopoly power. The lawsuit alleges that, over the last decade, the social networking giant illegally acquired competitors in a predatory manner and cut services to smaller threats — depriving users from the benefits of competition and reducing privacy protections and services along the way — all in an effort to boost its bottom line through increased advertising revenue. Attorney General James leads a bipartisan coalition of 48 attorneys general from around the nation in filing today’s lawsuit to stop Facebook’s anticompetitive conduct.

“For nearly a decade, Facebook has used its dominance and monopoly power to crush smaller rivals and snuff out competition, all at the expense of everyday users,” said Attorney General James. “Today, we are taking action to stand up for the millions of consumers and many small businesses that have been harmed by Facebook’s illegal behavior. Instead of competing on the merits, Facebook used its power to suppress competition so it could take advantage of users and make billions by converting personal data into a cash cow. Almost every state in this nation has joined this bipartisan lawsuit because Facebook’s efforts to dominate the market were as illegal as they were harmful. Today’s suit should send a clear message to Facebook and every other company that any efforts to stifle competition, reduce innovation, or cut privacy protections will be met with the full force of our offices.” 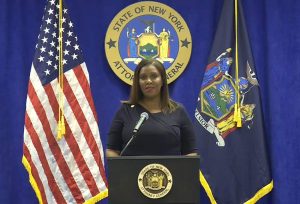 Since 2004, Facebook has operated as a personal social networking service that facilitates sharing content online without charging users a monetary fee, but, instead, provides these services in exchange for a user’s time, attention, and personal data. Facebook then monetizes its business by selling advertising to firms that attach immense value to the user engagement and highly targeted advertising that Facebook can deliver due to the vast trove of data it collects on users, their friends, and their interests.

In an effort to maintain its market dominance in social networking, Facebook employs a variety of methods to impede competing services and — as Chairman, Chief Executive Officer, and controlling shareholder Mark Zuckerberg has stated — to “build a competitive moat” around the company. The two most utilized strategies have been to acquire smaller rivals and potential rivals before they could threaten Facebook’s dominance and to suffocate and squash third-party developers that Facebook invited to utilize its platform — allowing Facebook to maintain its monopoly over the social networking market and make billions from advertising. As one market participant noted, if an application (app) encroached on Facebook’s turf or didn’t consider selling, Zuckerberg would go into “destroy mode,” subjecting small businesses to the “wrath of Mark.”

Facebook’s unlawful monopoly gives it broad discretion to set the terms for how its users’ private information is collected and used to further its business interests. When Facebook cuts off integration to third-party developers, users cannot easily move their own information — such as their lists of friends — to other social networking services. This decision forces users to either stay put or start their online lives from scratch, if they want to try an alternative.

Because Facebook users have nowhere else to go, the company is now able to make decisions about how to curate content on the platform and use the personal information it collects from users to further its business interests, even if those choices conflict with the interests and preferences of Facebook users.

Additionally, while consumers initially turned to Facebook and other apps now owned by the company seeking privacy protection and control over their data — Facebook’s “secret sauce” — many of those protections are now gone.

Who Would Turn Down a “High Enough Price”?

The harm to consumers over the last decade comes as a direct result of Facebook’s acquisition of smaller firms that pose competitive threats. Facebook employs unique data-gathering tools to monitor new apps all in an effort to see what is gaining traction with users. That data helps Facebook select acquisition targets that pose the greatest threats to Facebook’s dominance. Once selected, Zuckerberg and Facebook offer the heads of these companies vast amounts of money — that greatly inflate the values of the apps — all in hopes of avoiding any competition for Facebook in the future.

When it came to startups, Zuckerberg has observed, that if these companies were not inclined to sell, “they’d have to consider it” if Facebook offered a “high enough price.”

The elimination of competitive alternatives means users have no alternative to Facebook, fueling its unfettered growth without competition and further entrenching its position. The two most obvious examples of this successful strategy were Instagram and WhatsApp — both which posed a unique and dire threat to Facebook’s monopoly.

Facebook and Zuckerberg saw Instagram as a direct threat quickly after the company launched. After initially trying to build its own version of Instagram that gained no traction, Zuckerberg admitted, in early 2012, that Facebook was “very behind” Instagram and a better strategy would be “to consider paying a lot of money” for the photo-sharing app in an effort to “neutralize a potential competitor.”

A few months later, in April 2012, Facebook acquired Instagram for $1 billion, despite the company not having a single cent of revenue and valuing itself at only $500 million. Zuckerberg offered Instagram’s owners double the valuation that Instagram came up with even though Zuckerberg previously described the initial $500 million value as “crazy.”

The mobile messaging app WhatsApp also posed a unique threat to Facebook’s growth, giving users the ability to send messages on their mobile devices both one-to-one and to groups. While Facebook focused on several emerging mobile messaging services, WhatsApp was viewed as the “category leader” with over 400 million active users worldwide in 2014, and the one that could potentially provide the greatest threat.

Facebook feared WhatsApp eroding its monopoly power, stating WhatsApp or similar products posed “the biggest competitive threat we face as a business.” Facebook was also concerned that WhatsApp could ultimately be bought by a competing behemoth that had previously shown interest in social networking — namely Google.

This led Facebook, in February 2014, to acquire WhatsApp for nearly $19 billion — wildly more than the extravagant price Zuckerberg had recommended paying a few months earlier and the $100 million another competitor offered to buy the company two years earlier.

As laid out in today’s complaint, Facebook targets competitors with a ‘buy or bury’ approach: if they refuse to be bought out, Facebook tries to squeeze every bit of oxygen out of the room for these companies. To facilitate this goal, Facebook has used an “open first–closed later” strategy to stop competitive threats, or deter them from competing, at the inception.

Facebook opened its platform to apps created by third-party developers in an effort to increase functionality on the site and, subsequently, increase the number of users on Facebook. Facebook also drove traffic to third-party sites by making it easier for users to sign in, so that Facebook could capture valuable data about its users’ off-Facebook activity and enhance its ability to target advertising.

After years of promoting open access to its platform, in 2011, Facebook began to rescind and block access to the site to apps that Facebook viewed as actual or potential competitive threats. Facebook understands that an abrupt termination of established access to the site can be devastating to an app — especially one still relatively new to the market. An app that suddenly loses access to Facebook is hurt not only because its users can no longer bring their friend lists to the new app, but also because a sudden loss of functionality — which creates broken or buggy features — suggests to users that an app is unstable. In the past, some of these companies experienced almost overnight drop-off in user engagement and downloads, and their growth stalled.

Facebook’s response to competitors also serves as a warning to other apps that if they encroach on Facebook’s territory, Facebook will end their access to crucial integrations. Additionally, Facebook’s actions deter venture capitalists from investing in companies that Facebook might in the future see as competitors.

Ads Aren’t Cool…But They Are Profitable

As a consequence of Facebook’s expansive user base and the vast trove of data it collects from its users and users’ connections, Facebook is able to sell highly targeted advertising that firms greatly value.

The volume, velocity, and variety of Facebook’s user data give it an unprecedented, virtually 360-degree view of users and their contacts, interests, preferences, and activities. The more users Facebook can acquire and convince to spend additional time on its platforms, the more data Facebook can accumulate by surveilling the activities of its users and thereby increase its revenues through advertising — reaping the company billions every month.

Facebook is specifically charged with violating Section 2 of the Sherman Act, in addition to multiple violations of Section 7 of the Clayton Act.

Attorney General James and the coalition ask the court to halt Facebook’s illegal, anticompetitive conduct and block the company from continuing this behavior in the future. Additionally, the coalition asks the court to restrain Facebook from making further acquisitions valued at or in excess of $10 million without advance notice to the state of New York and other plaintiff states. Finally, the court is asked to provide any additional relief it determines is appropriate, including the divestiture or restructuring of illegally acquired companies, or current Facebook assets or business lines.

The complaint was filed in the U.S. District Court for the District of Columbia.

Separately, but in coordination with the coalition led by Attorney General James, the Federal Trade Commission (FTC) also today filed a complaint against Facebook in the U.S. District Court for the District of Columbia. Attorney General James wishes to thank the FTC for its close working relationship and collaboration during this investigation.

The Facebook investigation is being handled by Assistant Attorneys General Johanna Skrzypczyk, Hanna Baek, and Nathaniel Kosslyn, Legal Assistant Shirly Huang, and Internet and Technology Analyst Joe Graham — all of the Bureau of Internet and Technology, under the supervision of Bureau Chief Kim Berger; Assistant Attorneys General Zach Biesanz, Beatriz Marques, James Yoon, and Amber Wessels-Yen, and Legal Assistant Arlene Leventhal — all of the Antitrust Bureau, under the supervision of Bureau Chief Elinor Hoffmann; Chief Economist Paola Valenti; and Project Attorney Benjamin Cole. The Bureau of Internet and Technology and the Antitrust Bureau are both part of the Division for Economic Justice, which is overseen by Chief Deputy Attorney General Chris D’Angelo and First Deputy Attorney General Jennifer Levy.