Better Than Jam, a boutique of handmade, Returns To Governors Island for it’s 4th Year 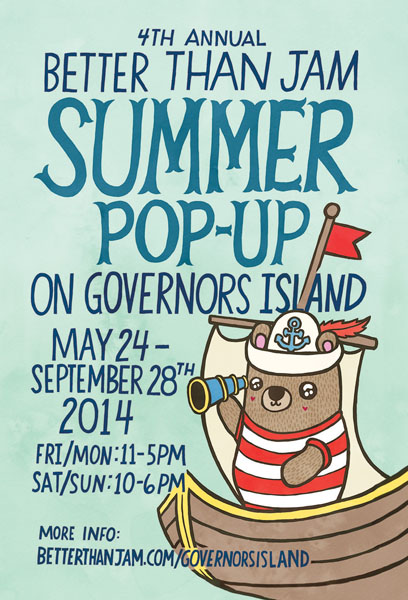 For the 4th year, the Bushwick Brooklyn boutique, Better Than Jam, will be once again hosting a collective of local designers in its summer location on Governors Island.  The Brooklyn shop of all locally handmade products will be taking the ferry ride over, and bringing with it the creations of New York City’s most talented designers, artists and crafters.   From May 24 through September 29, house 16, a cute yellow Victorian house in Nolan Park, will be filled with the work of talented people, who have created some amazing and original products, just for the island shop.  And this year, for the first time, the shop will be open 4 days to celebrate the greatly anticipated grand opening of new park land The Trust for Governors Island has been working so hard on.

“My past summers have been so wonderful on the island,” says Karin Persan, owner of Better Than Jam. “I am so excited to be invited back once again.  I feel very honored to be a part of this amazingly unique location, that grows and changes every season.   The beauty and peace that the people of NYC can find there is priceless.  Inspired by the island, the participating artists are creating some really unique products.”

For example, Maggie Stevenson, once a resident of the island, will be creating a piece of jewelry based on her own and the island’s history, Matthew A Yanchuk of Mayware will be decorating some of his ceramics with map images of the buttermilk channel and island landscapes, Better Than Jam will be printing t-shirts, totes, and onesies with an original Governors Island design, and My Zoetrope has designed a special Govs greeting card so you can tell a friend all about your adventures on the island.

In coming to Governors Island, Better Than Jam hopes to create context around artisanal processes and inspiration. Better Than Jam’s gift shop will complement and add to the Island’s growing popularity, allowing visitors to take home a tangible memento from their Governors Island visit—a souvenir that was designed and crafted nearby with the island in mind.  With the help of the Etsy New York Street Team, the shop will also host family-friendly demonstrations and workshops on Saturdays, to show and teach visitors some of their skills.

About Better Than Jam

Established 2010 in Bushwick Brooklyn, a neighborhood rich in history and brimming with an artistic community, Better Than Jam showcases a variety of clothing, jewelry, accessories, and artwork  created by some of NYC’s most talented artists and craftspeople.  It brings to the forefront local accomplished designers that make 100% handmade and high quality items at a fair price.

About The Etsy New York Team

An eclectic group of independent artists, artisans, designers and crafters from New York, New Jersey and Connecticut, united through Etsy. With nearly 200 members working in a variety of media, the team forms a strong, supportive community which provides a forum for artistic growth and professional development.

The Native Americans of the Manhattan region referred to the island as Pagganck (“Nut Island”) after the Island’s plentiful hickory, oak, and chestnut trees. In June of 1637 it was purchased by the Dutch and was called Noten Eylan .  In 1664, the English captured  New York, and took the island, however,  the island switched hands between the British and the Dutch over the next 10 years until the British regained exclusive control of the island for the “benefit and accommodation of His Majesty’s Governors,” and officially it became  Governors Island in 1784. Defensive works were raised on the island in 1776 by Continental Army troops during the American Revolutionary War, and fired upon British ships before falling into enemy hands. From 1783 to 1966, the island was a United States Army post. From 1966 to 1996 the island served as a major United States Coast Guard installation.  On January 19, 2001, 22 acres of the Island was proclaimed a National Monument, and in 2003, the remaining 150 acres of the island was transferred to the State of New York for a nominal fee of $1.