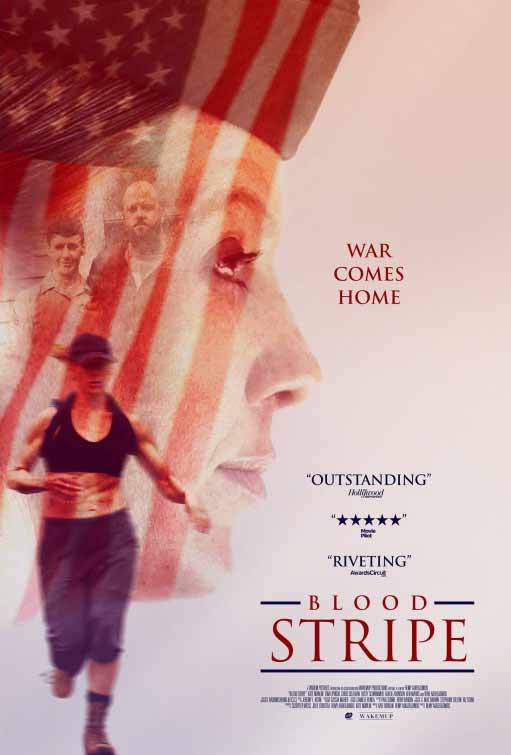 According to the US Department of Veterans Affairs pages on PTSD the percentage of veterans (of those having served in Operation Iraqi Freedom, Enduring Freedom and/or the Gulf War) who’ve suffered from the condition range anywhere from 11 to 20%. The numbers for those having served in the Vietnam War are much higher with readjusted numbers at about 30%.

Blood Stripe brings to light the torment so many veterans have experienced by telling the story of one fictional character’s plight. We’ll come to know her as The Sergeant since we never learn her name. She’s returned home from a tour of duty and all will not be alright with the world.

In the days that follow her return we stand as witnesses to the struggle she endures in re-acclimating to her civilian life. The people in her life, as much as they try, find how this is not the person they’ve loved and known.

We’ll learn that her battle-time duties in the Marines involved checkpoints by day and house raids by night. It would seem as if she’s constantly trying to get away from something; something haunting her perhaps? What’s exactly going on with her isn’t spelt out but I believe it’s clear what she’s dealing with. The symptoms are all there: she suffers from nausea; experiences flashbacks and the fact she has trouble with sleep might be a sign of nightmares; she’s depressed and is occasionally anxious, and; withdraws from and avoids social situations.

She would stumble upon a retreat located at the very summer camp she attended as a child and it would seem as if that encounter was a matter of destiny.  The sergeant would be welcomed wholeheartedly here, and although her struggles would continue, there’d be a semblance of greater peace to be found within.

There, she would meet a man there (credited as The Fisherman) she somewhat warms up, who in turn is struggling with his own demons. Most likely due to his having been incarcerated in prison. We won’t learn of his name either. Keep in mind that PTSD is something faced by those who’ve been incarcerated as well. It’d appear to us, that it was by good fortune that they’d found themselves sharing, if only for a short time, the same world.

Relationships aren’t clearly defined but the film trusts us to be smart enough to deduce what’s going on. It’s through one’s quick analysis as the audience that one might conclude various things. Such as how one character is actually the protagonist’s mother; or how her significant other’s first greeting, or lack thereof, upon her return may very well have contributed to her need to get away; in addition, there’s a love making scene in which he clearly had no regard for the huge scars on her back. Wounds we learn of later in the film. She’s undoubtedly going through a great deal, yet no one sees it for what it is.

The filmmakers do an exemplary job of bringing to light the agony such victims have to endure. I can truly appreciate how the scenes were assembled. Kate Nowlin who co-wrote the script and stars as The Sergeant does an extraordinary job of her role. We feel her pain and anguish and we cheer for her every time she crosses paths with someone we feel might have a positive effect upon her life. Remy Auberjonois who co-wrote and directed the film happens to be the son of actor, Rene Auberjonois who plays the Art, the counselor in the film. Rene’s character shines at times not only for his comical timing, but also for how he reaches out to the sergeant.

It’s my belief that both she and the man she meets at the retreat are kept nameless as a tribute to all who are afflicted by the illness. There’s a scene not too far from the end in which Art shares with the Sergeant the following: “Not till we are completely lost and turned around, do we begin to find ourselves”

Prayers for all the ‘Sergeants’ out there; may they find their way home.