“Boundless in the City” a traveling exhibition of outdoor works by Andrea Arroyo. 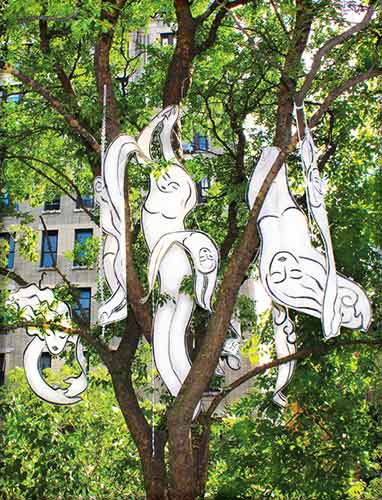 New York, July 2016.- New York Restoration Project (NYRP), is pleased to present “Boundless in the City” an original exhibition of site-specific, outdoor works created by award-winning artist Andrea Arroyo. The project started as part of Arroyo’s recent exhibition “Boundless – The Women of the Mansion,” featuring indoor and outdoor works at the oldest house in Manhattan. For “Boundless in the City,” the artist will create new versions of the outdoor pieces, installing them in four different gardens in Manhattan, Brooklyn and the Bronx.
This traveling exhibition aims to reactivate each garden with Arroyo’s lyrical works, taking art outside the museum realm and making it available to the public in unexpected locations.

“Boundless in the City” will take place from August 31st to October 31st, at the following locations:

October 17th – October 31st: Willis Avenue Community Garden, 378 Willis Ave. (@ 143rd St.) Bronx, NY 10454 (Bronx)
About the exhibit: ­The works in the exhibit are inspired by women from historical and contemporary New York and by the City’s natural landscape and history.
Each piece, executed in mixed media and repurposed materials, will be integrated within the natural environment of plants, grass and other elements of each individual garden.
With “Boundless in the City” Arroyo creates a multi-level conversation, bridging local culture and history and connecting the experience of women past and present, from the Lenape Nation to contemporary society, including the most recent wave of immigrants who make New York such a vibrant city today.
Arroyo has been exploring notions of identity, gender, class and social justice throughout her career. For the artist, the struggles of the women in history mirror the struggles of women in contemporary society, who defy social norms and prejudice in order to achieve their goals.

Andrea Arroyo is an award-winning artist with an extensive trajectory; her work is in the collections of The Library of Congress, the Smithsonian Institution, the National Museum of Mexican Art and the New York Public Library, among others.
Honors include: Global Citizen Award Artist, Clinton Global Initiative, 21 Leaders for the 21st Century Award; Groundbreaking Latina in the Arts; Official Artist of the Latin Grammys; Art in Embassies Program of the US Department of State; Empire State Arts Alliance Award; Harlem Arts Alliance Award, New York Foundation for the Arts Fellowships and multiple awards from the Northern Manhattan Arts Alliance, the Puffin Foundation and the Lower Manhattan Cultural Council.
Commissioned works include projects for the International Museum of Women, The New York Botanical Garden, The New York Women’s Foundation, the Morris-Jumel Mansion and El Museo del Barrio. Her permanent art can be seen in a New York subway station, two New York Public Schools and other public spaces.
Ms. Arroyo’s work has been published extensively, including in The New Yorker, The New York Times and The International Herald Tribune and has been the subject of over one 150 features in the international media. For more information visit: www.andreaarroyo.com

New York Restoration Project is a non-profit organization driven by the conviction that all New Yorkers deserve beautiful, high-quality public space within ready walking distance of their homes. Since our founding in 1995 by Bette Midler, NYRP has planted trees, renovated gardens, restored parks, and transformed open space for communities throughout New York City’s five boroughs. As New York’s only citywide conservancy, we bring private resources to spaces that lack adequate municipal support, fortifying the City’s aging infrastructure and creating a healthier environment for those who live in the most densely populated and least green neighborhoods. Visit nyrp.org for more information.
All programs are subject to change, please visit www.andreaarroyo.com for updates.