A review with some spoilers 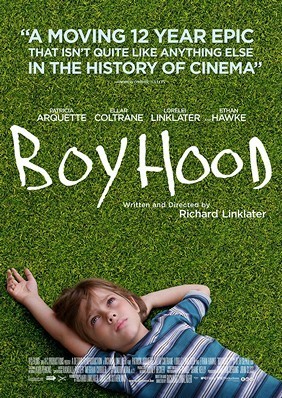 Sitting here I’m experiencing the winter doldrums so many of us go through in our gray city. It’s the obligatory experience this time of year. A melancholy state that usually lasts through the first half of March or until the first signs of Spring materialize. Yet it’s strange coming from someone like me. Heck, I’m now into my seventh year of a Zen kick which has taken me the bulk of my life to see and understand.

Then comes along a film like ‘Boyhood’ which we picked up this week as a rental. A film which helped me make a major adjustment to my recent outlook. A reminder of sorts as to what it’s all about. A wholesome tale about a boy named Mason and his family. A fictional story spanning 12 actual years in the boy’s life, that is to say, the actors actually filming over the span of those 12 years. From the point Mason is Six Years of Age to when he’s 18.

Now, when it comes to story telling and real life: A person’s path in life usually works out the way it does because of that individual’s personality, outlook, influences and much more…aside from extenuating circumstances; sometimes when laid out, event after event, one can see the moral of the story; sometimes it can be obvious and sometimes it’s not; sometimes the writer smacks you in the face with the meaning and moral of the story; and sometimes they’ve enough confidence in the audience’s intelligence and insight.

The method to my madness here will become a bit clearer in some moments. Please stay with me.

If this film had ended a 45 seconds earlier than it did or ended sans the exchange of thoughts between Mason and his new found friend, Nicole,  then this movie would’ve been nothing more than an average coming of age tale. Yet it’s now short of a full day since I watched the film, and I’m still exchanging insights about it with a friend. It’s now that I’m truly realizing how brilliant this film is.

Allow me to share the film’s ending dialogue between Mason and a girl he’s met upon his arrival to college. He, his roommate and two girls are in a mountainous range and Mason is sitting with one of the girls :

Nicole: ‘You know how everyone’s always saying, ‘Seize the Moment’…I don’t know what. I’m kinda thinking it’s the other way around. You know? Like, the moment seizes us.

Both sit smiling in a mix of comfort and awkwardness. Mason slowly looks left and right with his eyes going here and there. He then, oh so briefly, looks at the camera with a knowing smile before looking into the distance. I myself hadn’t picked up on that one little bit until I reviewed the ending once again. Thereafter, looking it up and finding out an actual reference to ‘breaking the fourth wall’…as in breaking out of the 3 dimensional world that the characters lived in and reaching out to us, the viewers.

Mind you I’m writing this absent reading any interviews which might’ve taken place with the Director/Writer Richard Linklater. Thus I’ve no clue as to how much of the ending was preconceived years earlier. Of course if you’re telling a story and you’re true to the characters then things will most likely play out on their own. Meaning, that character’s path is set, not necessarily in stone but in a way that’s credible.

Within this story we’ve the responsible mother who’s just about always seized the moment for the sake of herself and her kids. Yet a woman with a history of marrying dominating, and to some extent or another, abusive men. With the exception, that is, of her first husband played by Ethan Hawke. A man, contrary to the mother who has always appeared to allow the moment to seize him. A trait and outlook he tried to instill in Mason. An act dissimilar to those thrust upon Mason by his controlling step fathers and even his mother and high school photography teacher somewhat. Not to say of course that one shouldn’t be thinking about tomorrow but it’s knowing and understanding when to seize the moment and when to let it seize us. Considering all that, it’s my opinion that Mason’s biological father was his true saving grace; providing the balance that he needed in his life. Through the film I found myself half expecting Mason to one day run away from home. Something which might’ve happened or worse if not for Mason Sr.

All in all this film was a joy to behold and the more I think about it, and roll it over in my mind, the more I find myself in love with Richard Linklater’s creation. I already find myself anticipating a pleasant re-watch of the film despite its length. Have I mentioned it’s nearly three hours long?

BTW, there are thoughts out there that the girl who passed the note to Mason about his haircut is the same girl he ended the film with. After all, they’re both named Nicole and it’s an even greater way to end an already wonderful piece of work.

Boyhood (IFC Films) [/fusion_builder_column][fusion_builder_column type=”1_1″ background_position=”left top” background_color=”” border_size=”” border_color=”” border_style=”solid” spacing=”yes” background_image=”” background_repeat=”no-repeat” padding=”” margin_top=”0px” margin_bottom=”0px” class=”” id=”” animation_type=”” animation_speed=”0.3″ animation_direction=”left” hide_on_mobile=”no” center_content=”no” min_height=”none”][Produced by Richard Linklater and Cathleen Sutherland.] – This is the first nomination in this category for Richard Linklater. He is also nominated this year in the Directing and Original Screenplay categories. He was previously nominated for the adapted screenplays for Before Sunset (2004) and Before Midnight (2013). This is the first nomination for Cathleen Sutherland.

Boyhood – Richard Linklater – This is his first nomination in this category. He is also nominated this year in the Best Picture and Original Screenplay categories. He was previously nominated for the adapted screenplays for Before Sunset (2004) and Before Midnight (2013).

Performance by an Actor in a Supporting Role:

Ethan Hawke (“Dad” in Boyhood) – This is his fourth nomination and the second in this category. He was nominated for his supporting role in Training Day (2001) and received nominations for the adapted screenplays for Before Sunset (2004) and Before Midnight (2013).

Performance by an Actress in a Supporting Role:

Patricia Arquette (“Mom” in Boyhood) – This is her first nomination.

Boyhood – Written by Richard Linklater. – This is his third Writing nomination. He is also nominated this year in the Best Picture and Directing categories. His previous nominations were for the adapted screenplays for Before Sunset (2004) and Before Midnight (2013).