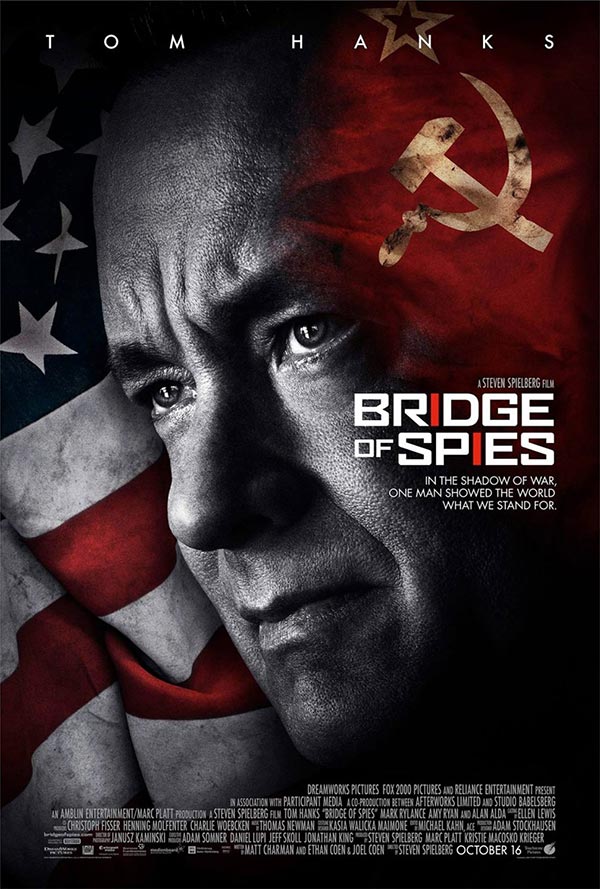 On June 21, 1957 Rudolf Ivanovich Abel, a supposed colonel in the Russian KGB was apprehended by the FBI in the borough of Brooklyn, NYC and charged with having carried out acts of espionage for over nine years against the United States of America. It was through their workings of what was known as the “Hollow Nickel Case” that they were able to zero in on Mr. Abel. He was sentenced later that year to 45 years of imprisonment.  New York City native and Attorney James B. Donovan was his legal representative. Having served only four years of his sentence Colonel Abel was on

February 10, 1962 exchanged for CIA U-2 pilot Gary Powers who’d been shot down over Soviet Union Airspace; something which Mr. Donovan was highly instrumental in seeing through. Bridge of Spies is the story ‘inspired’ by these events.

I’m giving this film a passing grade; a conclusion I’d reached upon successfully reaching the ending credits without having nodded off. You’ll have to bear with me and follow my lead as I lead you through what I believed at the time to be unbearable story-telling yet in the end all worthwhile.

It was maybe one third of the way into the film that I thought I’d discovered the encapsulating underlying theme of this story. You see, Donovan was experiencing the backlash of his defending Abel in Court during the ultra-paranoid era of Communist-Fearing Americanism in the 1950s. I figured that to be the crux of that which the audience would rally around. Unfortunately Donovan left for Europe to arrange for the exchange of prisoners and gone with him were any notions I might’ve had. Thereafter the story plodded along for what felt like an eternity; seemingly becoming more muddled as I felt less worried about the whys and hows of what was transpiring on the screen and more concerned with making it to the end.

Then the final half hour came ‘round the bend accompanied by vindication not merely for us viewers but as well for Mr. Donovan himself. Remember my mentioning the disapproval he’d faced? Well the film ended on a high note for some wonderful feel good moments. I won’t give away this subtle redemptive solution for what I’d mistaken to be a badly told story. What I’ll share is this: I left the theater with a warmly satisfying feeling and a smile from ear to ear. I found myself welcoming the chance to see this film again once it’s hit cable tv. As soon as I’d gotten home my first act entailed looking up the actual historical events around which this work was based upon. It’s at this point, whilst writing this that I find myself now tenderly reflecting upon some of the key characters of ‘Bridge of Spies’. I’d highly recommend this film.

Of worthy note is the fact that the obligatory score by John Williams was no where to be seen. In its place was the all too recognizable music by Thomas Newman. For anyone unfamiliar, this is the first time in 30 years that Mr. Williams did not score a Spielberg film.

If you’d like to learn, read and see more: