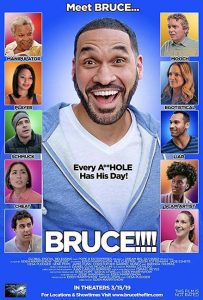 Bruce is a cad. He’s a scoundrel extraordinaire, the likes of which you’ll rarely ever get to see in life. He’ll cheat, he’ll lie, he’ll even con his own mother for money and smooch her up while doing it. No one’s ever as smart or quick as he is, nor are they ever able to think on their feet as well as he does. Bruce is also a smooth talker but, in as far as charming his way around a person, the aim is never about making you feel good and appreciated, no, it’s all about what Bruce wants and Bruce only ever cares about himself.
Armed with most, if not all of the very best lines in the film, Eden Marryshow (Bruce) takes us on a raucously funny ride for about the first hour of the film. It’s during that time we learn how low Bruce can go. We get hints of his past which lets us in on the fact that Bruce has been this way for some time, this is nothing new; but then, he meets the right girl (or perhaps the wrong one?) and things devolve into some cringeworthy displays of Bruce’s uglier side as the world he once knew crumbles down around him.
Going into this film I’d expected to be disappointed immensely but, in no time, it’d reeled me in and had me laughing at some mighty funny and witty exchanges. The collective intelligence and insightful brilliance of the filmmaker and writer(s) shone through beautifully. Little did I know, until after my first viewing, of how Mr. Marryshow, aside from starring in the film, was also the director and a co-writer. Then it all made sense. In order to have come up with a resulting piece of work like this, IMHO, some singular soul would’ve needed full control for the sake of delivering the vision he’d had in mind. Anything else might have left us, the audience, wanting.
Now don’t get me wrong. It’s not a perfect film but it is the sort that deserves heaps of acknowledgement. If not for the film itself then, at the very least, for Eden Marryshow who does an extraordinary job of bringing Bruce to life, both behind and in front of the camera. This man’s got an extraordinary talent in his comic delivery and then some.
Congrats Mr. Marryshow! Looking forward to seeing more of your work!