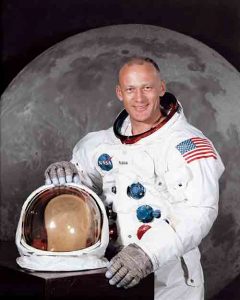 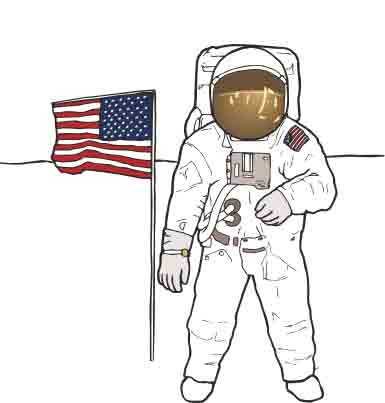 NEW YORK, NY, July 19, 2017 –Astronaut Buzz Aldrin, a U.S. Air Force veteran of the Korean War, will be the Grand Marshal for the 2017 New York City Veterans Day Parade, United War Veterans Council (UWVC) Chairman Douglas McGowan announced today.
Aldrin walked on the moon 48 years ago this week.
UWVC produces the New York City Veterans Day Parade, the largest commemoration of service in the nation, and Veterans Day USA, a nationwide initiative to honor service, coordinating Veterans Day observances in communities from coast to coast.
The U.S. Air Force, 70 years old this year, is the featured service for the 99th annual Veterans Day Parade.  A Memorial Ceremony begins at 10 a.m. Saturday, November 11, with a wreath-laying, flag-raising, 21-gun salute and Taps, at the Eternal Light Flagstaff in Madison Square Park.
The parade steps off at 11 a.m. from 26th Street and Fifth Avenue and proceeds up Fifth Avenue to 52nd Street.  About 40,000 veterans, Active Duty military personnel, marching bands and veterans’ supporters march past 500,000 spectators.  The parade is broadcast live from noon to 3 p.m. on WPIX-TV 11, and the American Forces Network.  It is streamed on the WPIX website, TaskandPurpose.com and Military.com.
“Col. Buzz Aldrin is the living embodiment of the U.S. Air Force motto – Aim High.  From the skies over Korea to Tranquility Base, where Col. Aldrin made his historic moonwalk 48 years ago this week, he has inspired generations around the world to reach for the stars,” said Douglas McGowan.  “On behalf of all our veterans, we are honored that this great American hero will lead us on November 11.”
“I’m proud and honored to lead the Veterans Day Parade. I took an oath at the age of 17 at West Point to serve my country and everything I do is in service to our country that to this day,” Col. Aldrin said.
“I think it’s important to remind the world of the value of service and having pride in one’s military career and the value that veterans bring to society. I’m very proud to be a veteran and proud to stand with our vets to get them the credit and support they deserve,” Buzz added.
Buzz Aldrin grew up in Montclair, NJ.  His mother, Marion Moon, was the daughter of an Army Chaplain and his father, Edwin Eugene Aldrin, was an aviation pioneer.  Buzz graduated one year early from Montclair High School and attended the U.S. Military Academy at West Point, graduating third in his class with a BS in mechanical engineering.
He then joined the Air Force where he flew F86 Sabre Jets in 66 combat missions in Korea; shot down two MIG-15′s, and was decorated with the Distinguished Flying Cross.  After a tour of duty in Germany flying F100′s, he earned his Doctorate of Science in Astronautics at MIT and wrote his thesis on Manned Orbital Rendezvous.
Selected by NASA in 1963 into the third group of astronauts, Aldrin was the first with a doctorate and became known as “Dr. Rendezvous.”  The docking and rendezvous techniques he devised for spacecraft in Earth and lunar orbit became critical to the success of the Gemini and Apollo programs, and are still used today. He pioneered underwater training techniques to simulate spacewalking.  In 1966 on the Gemini 12 orbital mission, Buzz performed the world’s first successful spacewalk – extra-vehicular activity (EVA), and set a new EVA record of 5 1⁄2 hours. During that mission he also took the first ‘selfie’ in space.
On July 20, 1969, Buzz and Neil Armstrong made their historic Apollo 11 moonwalk, becoming the first two humans to set foot on another world. An estimated 600 million people – at that time, the world’s largest television audience in history – witnessed this unprecedented heroic endeavor.
Upon returning from the moon, Buzz was decorated with the Presidential Medal of Freedom and numerous awards all over the world.  In 2011 along with his Apollo 11 crew mates Neil Armstrong and Michael Collins, he received the Congressional Gold Medal.
Buzz is the author of 9 books, most recently his children’s book, “Welcome to Mars: Making a Home on the Red Planet” and his newest NY Times andWashington Post Bestseller, “No Dream Is Too High: Life Lessons from a Man Who Walked on the Moon.”  Both are published by National Geographic.
In October 2014, he revamped his ShareSpace Foundation to be focused on STEAM Education – Science, Technology, Engineering, Arts and Math – to ignite the spark and fuel excitement for space in kids – specifically for K-8.  In August 2015, he launched the Buzz Aldrin Space Institute at Florida Tech to promote and develop his vision of a permanent human settlement on Mars.
Since retiring from NASA and the U.S. Air Force, Col. Aldrin calls himself a Global Statesman for Space and has remained a tireless advocate for human space exploration.

The United War Veterans Council, Inc. (UWVC) is a 501-(c) (19) non-profit organization that honors and supports veterans and their families through advocacy, services, and sustainability programs. We produce the NYC Veterans Day Parade, the largest commemoration of service in the nation.  Since our inception, the UWVC has been a non-political, non-partisan organization, with no agenda or purpose other than convening and mobilizing diverse communities to ensure government, the private sector, and the general public expand their support for veterans and their families.  We represent the mosaic of the veterans’ community, encompassing veterans of all eras and backgrounds. www.uwvc.org / FB / Twitter.