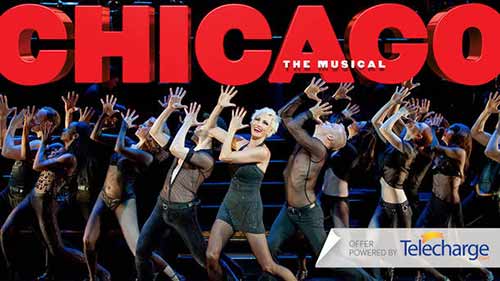 “Chicago” on Broadway: The Red-Hot, Tony-Winning Musical (“All That Jazz”)

Boasting sizzling songs, seductive dance numbers and a show biz story that packs a powerful punch, “Chicago” tells the tale of accused murderers Roxie Hart and Velma Kelly, who’ll stop at nothing to get the attention of the press and celebrity attorney Billy Flynn. During the showy decadence of the 1920s, their malicious crimes turn them into media darlings, producing a barrage of sensational headlines, the likes of which could just as easily be ripped from today’s tabloids. A smash on Broadway (winning six Tony Awards) and on the big screen (winning six Academy Awards), this biting satire features the unforgettable songs of Kander and Ebb, including “All That Jazz,” “Cell Block Tango” and many more hits. Enjoy this musical trip back to a time when a little razzle-dazzle made everything just fine in this dazzling production at the Ambassador Theatre in the heart of Broadway.

The following would be the official video trailer for the musical, Chicago.