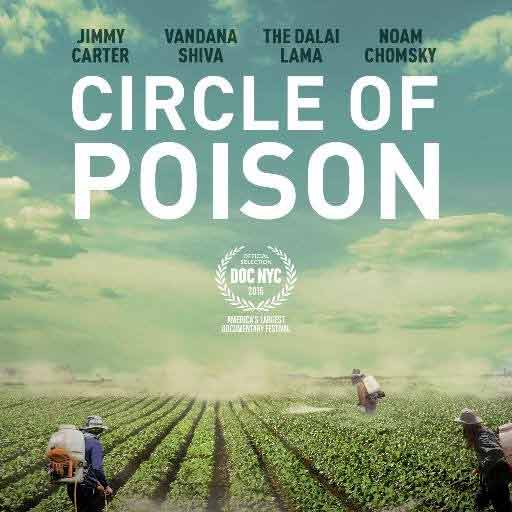 Synopsis: Once a pesticide is banned in the United States for its dangerous health and environmental effects, companies are still permitted to manufacture it for export only. This policy sends a message to the world that American lives are more valuable, yet ironically these toxic pesticides circulate the globe and come back to the US as residues on imported food in the circle of poison.

Narrated by Elizabeth Kucinich and featuring interviews with President Jimmy Carter, Dr. Vandana Shiva, Professor Noam Chomsky, Senator Patrick Leahy, and His Holiness the Dalai Lama, the film exposes the shocking practice of corporate profit in the toxic pesticide trade. It takes viewers across the globe, to India, Mexico, Argentina, Bhutan, and the United States, to document the emotional stories of victims and the inspiring ways communities are fighting back.

Circle of Poison shows how the global pesticide industry is politically powerful, shaping regulations (or lack thereof) and the conditions of food and farming around the world. Yet for every victim of the industry there are even more people fighting for their rights to safety and health and creating alternatives to the agrochemical industrial complex. From organic farm co-ops in Mexico and Argentina to a growing farmers market in India to the entire country of Bhutan becoming 100 percent organic, people are finding ways to grow food that is healthier for their families, communities, and the environment that don’t rely on or enrich the agrochemical corporations that have poisoned them.

Growing up in the 1970s we learned in elementary school of DDT (dichlorodiphenyltrichloroethane); its uses and the fight against its existence. Something which would lead to its 1972 ban in as far agricultural application was concerned. That was the extent of our knowledge and teachings as children. Little would we know, even as adults years later, of the magnitude of harm similar chemicals would inflict upon the world. Little would we come to recognize the atrocities committed upon our fellow humans in lands near and far by conglomerates whose only concern was making more money.

Circle of Poison is an important documentary, one of numerous others in past years, to bring such related facts to light. Brought to us by Nick Capezzera, Evan Mascagni & Shannon Post, it takes us to as far reaching spots in the world as Kasaragod, India; Yaqui River Valley, Sonora, Mexico; Ituzaingo, Argentina; Chacabuco, Argentina; and as well to our very own backyard along the Mississippi River in the state of Lousiana. We learn of how so many children and adults are suffering from cancers, birth deformities + defects and other illnesses at the hands of the pesticides and poisons spread about by agri-chemical corporations. The biggest culprits of which would be comprised of the “Big Six”; they being the six agri-chemical companies that control upwards of 75% of the Global Pesticide Trade. Points made in the film by Andre Kimbrell – Founder / Executive Director of Center for Food Safety. These companies are: Monsanto, Dow, Bayer, Syngenta, DuPont and BASF.

We learn as well of how the FDA inspects merely 2% of imported produce. I personally checked into this and sure enough there are reports aplenty in this regard. Now why is this important? Well, just as is mentioned in the film: “…if a chemical is banned or unlicensed as too dangerous to use in America should it be morally wrong to export it to somewhere else?” In addition, obviously, what goes around comes around. If the FDA isn’t up to the task of inspecting all incoming foods then America may very well be receiving foods which’ve been exposed to these poisons abroad and brought back and consumed in particulate form; one of various issues which these companies and high ranking officials in our government turn a blind eye to.

As if the above isn’t enough to get one’s ire up there are as well the many lobbyists who’ve repeatedly gone through the revolving career doors of major governmental agencies, such as the FDA, EPA, USDA and companies like Monsanto, DuPont and others. As stated by Mr. Kimbrell: “In 2012 the big six hired 116 lobbyists of which 112 were former members of these agencies.”

On January 15, 1981, Jimmy Carter put through Executive Order 12264 – Export of Banned or Significantly Restricted Substances. Regrettably, 33 days later on February 17, 1981 it would be revoked by Ronald Reagan through Executive Order 12290. Quite possibly this is something which falls in line with the culture of behavior in the state of Louisiana where these companies are given a supposed blank check. A state where they are able to get lowered or non-existent property taxes for the sake of expansion and more. Where they’ve the ability to lobby as they wish for the taking away of rights of citizens’ health care and reduced (or non-existent?) health monitoring in the event of a toxic exposure. Where through campaign contributions, they can get into office those who would look favorably upon the aims of such companies. I haven’t completely looked into all these allegations but somehow I wouldn’t be surprised in the least to find them to be true. One neither need search very hard nor far for the “Industrial Corridor” otherwise known as “Cancer Alley“. The names given to the stretch along the Mississippi between Baton Rouge and New Orleans where people are chronically exposed to chemical pollution and where there are 150 industrial facilities.

Relatedly speaking would be Bobby Jindal’s having applauded these companies’ expansions while he was governor of Louisiana. In response to a major expansion by Monsanto, at one point, Mr. Jindal proclaimed the company a ‘model corporate citizen’. Coincidentally, or not, is how his wife, Supriya Jolly Jindal, a chemical engineer, previously worked at Monsanto.

According to the film, the big six had spent almost 220 Million dollars lobbying just the federal government. It’s no secret how the corporate world gets their way in today’s environment through such tactics.

The global pesticide market was valued at approximately $38 billion in 2011. This figure is expected to reach $65 billion in 2017. Despite this growth, public awareness in recent years, within our country and beyond, has risen considerably. Awareness over the aforementioned concerns has risen and one can only hope that they don’t subside. I myself learned through this film about the phenomenon known as the grasshopper effect; the geochemical process by which certain chemicals such as organic pollutants, and such, are transported from one region to another through heat differences in those regions and through wind cycles.

The filmmakers have managed to squeeze into the nearly 70 minutes of documentary many illustrations of how our fellow man, his wife and their offspring have come to suffer. Enough to make the heart ache many times over. The film ably and competently drives home the message of what’s happening to our world. its inhabitants, animals and food sources.

The documentary closes out its last portions on slightly more upbeat notes. One of which has touched my heart. Vandana Shiva – Environmental Activist & Author of Poisons in our Food, who appears numerous times throughout the film, shares with us this story of how the Prime Minister of Bhutan reached out to her. “The Bhutan Government has very very clearly decided to not measure growth which measures only how much commerce takes place; and of course you can have lots of growth by first creating pesticides. The pesticides in the stream makes lots of profits; that’s growth. People get cancer. The same pesticide company sells you a patented cancer medicine; that’s growth. This Growth is not measuring welfare. It is measuring destruction, death and illness. So Bhutan decided it was going to make happiness the objective and therefore they focus on gross national happiness; and the prime minister when he wrote to me he said there is only one way I see growing gross national happiness…it’s by growing organic.”

The notion and point that organic agriculture is not only more beneficial to our world due to the obvious reasons of abstaining from the use of poisons, but as well for the non-existent pest resistance which comes about through the use of such poisons, is made loud and clear. We’re told of how such a route results in increased yields compared with a pesticide reliant system.

One can only hope that the sort of Gross National Happiness mentioned in this valuable documentary is one to be embraced on a greater scale worldwide. We can only hope that more countries will come to realize that the collective worth of their cities shouldn’t be based on whether they use pesticides for the sake of the so-called ‘modern way of farming’. We can only pray that the world will awaken further.

I thank the filmmakers very much for this documentary.

Below I’ve shared numerous related links as they pertain directly to mentions within the film; as well as other items I thought would be of help to anyone interested. Going forward, more will be added.

Monsanto: Too big to prosecute: How Monsanto slipped the DOJs grasp

David Weir – Journalist and co author of Circle of Poison

Inspectors Struggle To Keep Up With Flood Of Imports

His Holiness the Dalai Lama, The 14th Dalai Lama of Tibet

Nick is a cinematographer and editor from Boston, Massachusetts. Prior to Circle of

Poison, he produced a documentary short, “A Summer at Hopper’s House” that was

Evan is an attorney turned filmmaker from Louisville, Kentucky. He is currently the

Amendment rights for filmmakers, journalists, and activists across the country.

Shannon is a filmmaker and food and garden educator from Florida. She is co-founder,

along with Evan and Nick, of Player Piano Productions, a company that makes films

that matter in Brooklyn, NY.