With the half-week’s worth of fireworks underway, we found that the responses to the city’s Twitter Posting about tonight’s fireworks were not welcomed. Much like last night’s tweet for the first evening of these fireworks, the responding tweets were everything but thrilled.

Surely, many are not happy about Mayor de Blasio’s decision to go on with these fireworks which he supposedly called for some time ago. Recent concerns over the city and state’s budget concerns and a suffering economy surely don’t help matters much. People are out of work. Some may lose their homes. Kids are facing an uncertain future. ‘and of course, the city as a whole has been bombarded by illegal fireworks for weeks now.

Below, is the original tweet followed by just some of the many responses. 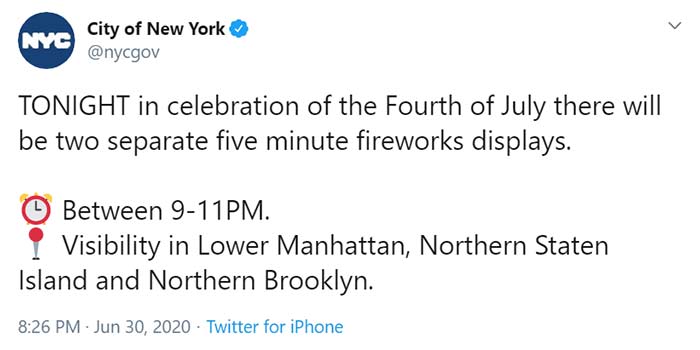 Beyond disrespectful to all working families, the elderly, folks with PTSD, pets, and basically all New Yorkers – we’ve had enough of these stupid #NYCFireWorks

– how about @Macys pay their workers instead?!? shame on @NYCMayor for allowing this! so disconnected! #DefundNYPD

Macys fired over 4,000 employees because of lack of money, BUT they have money for this every night of this week?

How the hell is it a celebration if people can’t watch? Hearing explosions out of context isn’t fun.

No, no, a thousand times no. Sayeth millions of NYC humans and canines.

Haven’t we had enough fireworks?

Did anyone ask for this? Didn’t think so

New Yorkers For The Past 3 Weeks: “Do something about all the illegal fireworks! We don’t want fireworks!” Nobody: “We should have more fireworks.”
@BilldeBlasio: “These people need fireworks! Give them more fireworks!!!” Tone-deaf and brain-dead is an awful way to live life.

Tonight has the added insult of being Taxpayer-funded!!!