A film by Alejandro Jodorowsky Prullansky 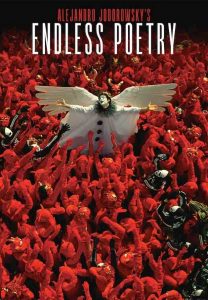 From the mind of Alejandro Jodorowsky Prullansky is his latest artistically masterful autobiographical work, ‘Endless Poetry’. Spanning the years from his youth to young adulthood in Chile the film takes us on a visually imaginative journey. Through it all the artist encounters the arts and the beatnik misfits of the avant-garde world he discovers and embraces.

There are films that take themselves too seriously and there are those with just the right amount of balance that rise to the level of cinematic respectability. Then of course there’s ‘Endless Poetry’. A film that doesn’t take itself seriously at all; and that right there may be the very best thing about this work. It plays out like one dream sequence after another; standing on the cutting edge of art lampooning and parodying life.

There are props galore of which I’d imagine quite a number to be of the metaphorical kind. Problem is, you’d have to know its translation to truly recognize it. Out of respect to the artist’s brilliance I’ve given him the benefit of the doubt in that regard. Regardless, it’s an exquisite mix of theatrical aids and technologically advanced cinematics. What I mean to say is, ‘What a mix!’ Seeing this film it’s clear that the man had the resources and the manpower to do with it as he saw fit.

I’d found myself often chuckling and smiling not because any portion was outright comical or ridiculous, but due to the artist’s application of visual interpretation of the message(s) he sought to convey. Although ‘laugh out loud moments’ did in fact exist. The sheer luster of artistic license was overwhelming and felt much too priceless for any screen on which the film would be cast. It’s as if a mad genius was at work in a film studio with an ample supply of toys at his disposal.

Mind you, I’ve seen it mentioned how Federico Fellini is one of Jaradowsky’s greatest cinematic influences; and that shows through this film. In recalling Fellini’s films, of which I’ve only seen a few, I realized a familiarity in my watching. All the outlandish brevity was there.

There’s no question in my mind as to the worthiness of this film come awards time. May not necessarily win one award after another but you never know and, if anything, this visual feast should garner its share of nominations.

I thank Mr. Jaradowsky for this masterpiece which belongs just as much in a museum as it does on the screen.