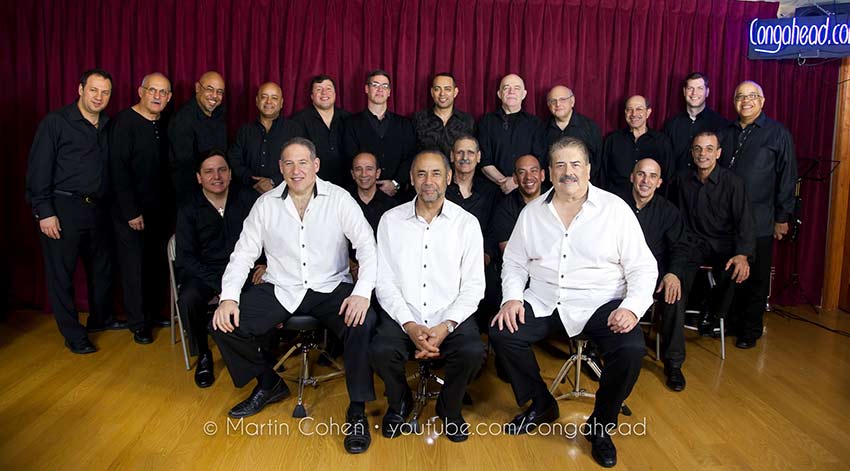 At the Lehman Center for the Performing Arts

Get Your Tickets Here…

Lehman Center for the Performing Arts is excited to be bringing back the music to the Bronx as they kick off their NEW 2021-22 SEASON with the Latin GRAMMY Lifetime Achievement Award winner, ANDY MONTAÑEZ, who will perform selections from his vast repertoire, with The MAMBO LEGENDS ORCHESTRA and PATTY PADILLA on Saturday, October 2nd, 2021 at 8pm. For this momentous concert, the legendary ANDY MONTAÑEZ, who has been performing for more than 57 years and is the most recorded salsa singer in the world, will be joined by one of the most popular Big Bands in Latin music, the incredible MAMBO LEGENDS ORCHESTRA. In addition, vocalist PATTY PADILLA from Colombia, will perform a Tribute to Celia Cruz.

Lehman Center for the Performing Arts is on the campus of Lehman College/CUNY at 250 Bedford Park Boulevard West, Bronx, NY 10468.  Tickets for ANDY MONTAÑEZ on Saturday, October 2nd, 2021 at 8pm ($100, $65, $55, $50 and $45) can be purchased by calling the Lehman Center box office at 718-960-8833 (Monday through Thursday, 10am–5pm, and beginning at 4pm on the day of the concert), or through online access at www.LehmanCenter.org. Lehman Center is accessible by #4 or D train to Bedford Park Blvd. and is off the Saw Mill River Parkway and the Major Deegan Expressway.

IMPORTANT COVID-19 SAFETY INFORMATION: In order to keep our staff, audiences, and artists safe, proof of vaccination and masks will be required to attend any performances at Lehman Center for the Performing Arts in accordance with the Mayor’s Office of the City of New York.

ANDY MONTAÑEZ, nicknamed “El Godfather de la Salsa” and known for his rich, powerful vocals, was born in San Juan, Puerto Rico. He gained international popularity during his 15-year tenure (1962-1976) as lead vocalist of the legendary salsa group El Gran Combo, producing 37 albums that included hit songs such as “Un Verano en Nueva York”, “Vagabundo”, and “Hojas Blancas”. In 1977 he replaced Oscar D’León in the popular Venezuelan orchestra La Dimension Latina, recording eight albums that included hits like “El Eco del Tambor” and “Ave María Lola”. During this same period, Montañez contributed vocals to the three superb Puerto Rico All Stars salsa albums Puerto Rico All Stars (1977), Los Profesionales (1978), and 1979’s Tribute to Messiah which was dedicated to Eddie Palmieri. In 1980, Montañez formed his own orchestra in Puerto Rico and released the popular album Salsa Con Caché. 1985’s Andy Montañez was a game changer not only because it was on the Billboard Tropical chart for 30 weeks and reached #2, but because it was the first of many albums that would feature Andy’s sons Andy Jr. and Harold Montañez singing coro. 1987’s Mejor Acompañado Que Nunca and 1988’s El Eterno Enamorado allowed Montañez to secure his place amongst the legends of Salsa. During the ‘90s, he also recorded three albums of boleros and Bohemian songs with fellow Salsa great Ismael Miranda, followed by a reunion in 2005 to record the hit song “Se Fue Y Me Dejo”. Montañez (with Pablo Milanes) won the 2006 Latin GRAMMY Award for Best Traditional Tropical Album for AM/PM Lineas Paralelas. In 2014, Andy, with the roots group Viento de Agua, contributed the song “Cortaron a Elena/Santa María” to the album and film Que Lindo es Puerto Rico. In celebration of his 55th Anniversary, he released his 2017 album Best 55 Años De Historia which he recorded with his sons and their salsa band Sabor y Mucho Swing that also includes his single “Acompañame”. In 2018, Montañez was honored with the Lifetime Achievement Award as part of the 19th Latin GRAMMY Awards.

The MAMBO LEGENDS ORCHESTRA are masters of performing the music of the Palladium Era: Machito, Tito Puente, and Tito Rodriguez, and was created in 2000 by former members of the Tito Puente Orchestra, led by John “Dandy” Rodriquez, Mitch Frohman and musical director Jose Madera. Famed bongocero John “Dandy” Rodriguez began performing as a teenager with Tito Rodriguez and played with Ray Barretto and Típica ’73 in the ‘70s before beginning his 27-year stint playing bongos in Tito Puente’s band. Bronx native Mitch Frohman was the sax and flute soloist with the Tito Puente Orchestra for 25 years and has also played and recorded with such famed Latin artists Eddie and Charlie Palmieri, Paquito D’Rivera, Chico O’Farrill and the Grammy-winning Spanish Harlem Orchestra. Musical director, timbalero and arranger Jose Madera started playing timbales with Machito as a teenager and was the first musical director for the Machito Orchestra. He was Tito Puente’s conguero for 30 years, his musical director for ten years, the staff arranger at Fania Records since the 1970’s and has performed on over 100 recordings by Latin, pop, R&B and jazz artists. The Mambo Legends Orchestra is dedicated to keeping the ‘50s and ‘60s Palladium-era sound alive as it explores new musical concepts. Their release, Watch Out! ¡Ten Cuidao! (2011) was nominated for the Latin Grammy Award for Best Salsa Album and they were featured in the 2013 documentary film “For the Love of the Mambo.”

PATTY PADILLA grew up in Bogotá, Colombia where she began to sing professionally with the local salsa musical group KATERVA before joining the salsa band Los Dinámicos in 1999 and the Orquesta Los Número Uno de Columbia in 2001. Inspired by the great female Cuban salsa vocalist Celia Cruz, Padilla formed the Azúcar Band in 2002 to present the rhythm and flavor of salsa, the beat of the drums of Colombian cumbia with sounds of the accordion, box and guaracha of Vallenato, and the joy of merengue and tropical music. Because her voice was often compared to Celia’s, Patty became part of the Colombian reality show Yo Me Llamo, where she sang the role of Celia Cruz. The national success of the show led Patty to gain significant international recognition and to land the role of the musical voice of the Queen of Salsa in the Spanish-language telenovela Celia, produced by Fox Telecolombia. In 2017, she released a tribute album, Tributo a La Guarachera, showcasing her voice that fits the guarachas in her own phenomenal way. Highlights of the album include “Mi Salsa Pa ’Los Rumberos” and “Sopita En Botella”. In 2020, she released the single “La Noche Entera” with Cuban singer Naldo De Cuba and was featured on the album Clones de la Salsa, where she represented Celia Cruz. Patty Padilla’s Tribute performance to Celia Cruz at Lehman Center is a performance you will not want to miss!