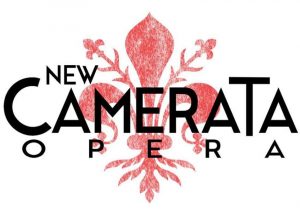 New Camerata Opera presents the virtual world premiere ofThe Brooklyn Job on Thursday, May 6, 2021 and Saturday, May 8, 2021 at 8pm EDT. Tickets are $40 and can be purchased online at https://www.newcamerataopera.org/events.

The Brooklyn Job is an interactive, virtual museum heist written and directed by New York comedian Sarah Morgan Ashey. Under the music direction of Dan Franklin Smith, this thrilling narrative is set to wide-ranging repertoire selections performed by a cast of ten singers. On-location shoots, professionally recorded audio, and live performance elements converge with engaging audience polls to create a truly unique and exciting story. Guests (in the NYC metropolitan area) can enhance their at-home viewing experience by opting into chic cocktail kits and themed party favors for a fully immersive experience.

New Camerata Opera was founded with the mission of building new audiences for the art form through engaging, exciting and educational productions. The organization accomplishes this via three main initiatives: full-length operas presented at innovative and daring venues, newly arranged and adapted children’s operas (Camerata Piccola), and originally commissioned short operatic films for presentation online (CamerataWorks). It is through these multi-faceted operations that NCO has successfully brought countless new opera lovers into the cultural fold. The organization has been hailed as “the future of opera,” and is one of the most consistently active and present opera companies in New York. For more information, visit newcamerataopera.org.

This program is supported, in part, by public funds from the New York City Department of Cultural Affairs in partnership with the City Council.

Sarah Morgan Ashey is a Tennessee born, New York based actor, comedian and baker whose work stretches across film, digital and stage. A seasoned improviser, Sarah performs weekly on a House Team at one of New York’s premiere comedy hubs, the Peoples Improv Theater, where she was awarded a full scholarship and is a current member of their faculty – offering both intro and advanced classes to aspiring comedians. In December 2019, Sarah was named the Teacher of the Year. Additionally, she studied sketch at the Upright Citizens Brigade and is a proud member of Story Pirates – an organization known for adapting stories written by kids into sketch comedy. Her original written works have been performed in the Tennessee Women’s Theater Festival, The Boston Comedy Arts Festival, the New York Sketch Festival and more. Sarah is the co-writer of the musical, A Hardboiled Christmas, which was professionally produced at the Boiler Room Theater in Nashville, TN. Her TV pilot script, Flying Blind, co-created with her writing partner, Frankie Johnson, was named a winner in the First Ten Pages Screenplay Competition. She resides in Brooklyn with her husband Paul and is the co-owner of Kings Kolache, a popular bakery featured on the Today Show, NPR and Bon Appétit Magazine.

Dan Franklin Smith is a resident of New York City but performs in colleges, universities, museums and concert halls throughout the US and Europe. As Music Director and recital soloist with the international festival, Elysium: Between Two Continents, he is showcased in performances here and in Europe. Major German newspapers praise his work for “stirring emotionalism, precision with keen intensity, the subtle hesitations and shifts that constitute great expression.” He has received high praise time and again from Munich’s Süddeutsche Zeitung as well as the Münchner Merkur, Coburger Tageblatt and Neue Presse. Recent and future highlights include performances in Maryland, Georgia, Minnesota, Michigan, North Carolina, Tennessee, New York, Virginia, Florida, Washington, D.C., Wisconsin, Arizona, New Mexico, Canada, and California, where he played performances of Brahms’ “First Piano Concerto” and toured again in 2010. His European engagements have included Bernried, Dessau, Coswig, Wittenberg, and Leipzig in Germany, Oslo, Paris, London, including recitals at St. Martin-in-the-Fields, and appearances in Sweden. In past summer seasons he performed in Berlin, Munich, Bernried, Coburg, Offenbach, Neuwied, Brussels, London, Zagreb, Warsaw, Lodz, and Kiev. In fall 2010 he appeared at the Bruckner Festival in Linz and the Mozarteum in Salzburg. As chamber musician and vocal accompanist, he has performed at venues such as The National Gallery of Art in Washington, D.C. — where he recently presented a solo recital and was immediately invited back for a return engagement in 2012 — the Cleveland Museum’s Distinguished Artist Series, and Alice Tully Hall at Lincoln Center in New York City, as well as tours in Bermuda, Taiwan, and Puerto Rico.