Official Storyline: “Caleb, a 26 year old coder at the world’s largest internet company, wins a competition to spend a week at a private mountain retreat belonging to Nathan, the reclusive CEO of the company. But when Caleb arrives at the remote location he finds that he will have to participate in a strange and fascinating experiment in which he must interact with the world’s first true artificial intelligence, housed in the body of a beautiful robot girl.” 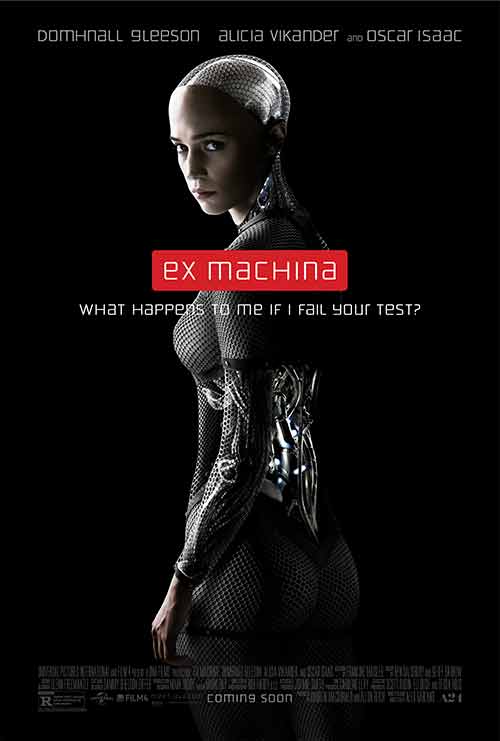 Having missed the film when it was showing in theaters this past Spring I picked up the DVD rental and was pleased to have done so. Mind you, the following won’t be so much of a review for those who haven’t seen it as it’ll be a shout out to those who have.

Alex Garland’s directorial debut comes to us as a thriller unlike any I’ve seen in quite some time. It’s a film which was amazingly filmed in mere weeks. Something which really isn’t too too surprising considering the perfect amalgamation of talent involved. The three main actors did stunning jobs of convincing the audience of their roles. Oscar Isaac as the condescending Nathan was quite fine as was Domhall Gleeson as Caleb. Although, it was Alicia Vikander as Ava who stood out the most. Quite possibly I’m the only one who felt this way but whilst Caleb was having his sessions with Ava, she had me undergoing my own reverse versioned Turing Test of sorts. What I mean to say is, it was a bit of time before I shook myself awake to realize that Ava was actually being played by an actress and not some robot or CGI created being. It’s this sort of near perfect misdirection and great acting that makes this such a cinematic thing of beauty. Of course I suppose I’ve the animated portion of her body to thank for.

Regardless of the special effects, my having momentarily forgotten her humanity, and what lead me there, is just as much a feat as was my reaction to Caleb’s bloody self examination in the mirror. Under other circumstances I’d have thought that a cheap plot device. Yet for this one scene I couldn’t help but draw parallels with another film I’d seen this year, the ‘Stanford Prison Experiment’. Both films concerned acts of pseudo imprisonment and isolation. Levers which lead to the brainwashing of key character(s). In ‘the Stanford…’, the re-enactment of a true story, free individuals came to believe they actually were in a real jail. A belief which led them to act accordingly. In Ex Machina, Caleb wasn’t exactly imprisoned but he was certainly isolated with merely Nathan and a couple of robots as company; and let’s not forget how he was limited as to his exploring within his new temporary domain. It’s these factors, coupled with the ‘New World’ he’d been introduced to, which contributed to his reality being thrown off kilter; and so, I believed in his questioning of his own reality and his indirect conditioning. It was sheer perfection in the way plot, acting and dialogue worked together towards such ends.

I’d mentioned already one other film and my mental comparisons didn’t end there. Kyoko’s dance scene reminded me of the Rocky Horror Picture Show. I’m sure you can see why. Then there’s Blade Runner which came to mind not just because of the interview between Harrison Ford’s character, Deckard and the replicant but as well due to Ava’s resemblance to Rachael. However, what struck out at me most was not just how the movie as a whole, but more specifically a part of the soundtrack, reminded me of a particularly famous movie producer/director. After having seen the film I just had to do a search online to see if I was the only one who noticed a subtle resemblance in a little tune to that of ‘Close Encounters of the Third Kind’. I wasn’t. I couldn’t help but think of how this was a wink at Steven Spielberg, but hey, the entire film’s the kind over which I could easily imagine him thinking to himself, “Damn, I wish I’d done that!”

In the end, Ex Machina is brilliant work and my hat goes off to Alex Garland for his imaginative writing and directing, and as well to all those involved. I can only hope that Hollywood takes notice come Oscar time. It should garner, in my opinion, nods at the very least for any one or more of the following: Direction, Writing, Acting, Best Picture and Special Effects.