Installation at the High Line: The Moon, the Earth and Us: Presented by Oliver Jeffers Studio

On the High Line between 15th and 16th Streets

Photos and Video featured below

What a joy to stumble upon cool works of art and presentations in our travels through this great city. One of which happened to be Oliver Jeffers work featuring a globe rotating amidst the blue lights of the High Line. Below, you’ll find images taken as well as a video.
The following is borrowed from the official Friends of the High Line page here…
“”Have you ever wondered what astronauts can see from space?
As well below are the words that can be found on the accompanying placard found at the display/installation. 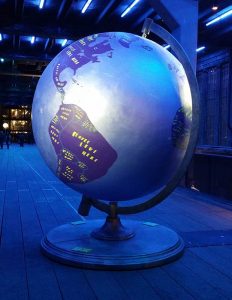 Welcome to outer space. We on Earth have only one moon and it’s a quarter of a million miles away, or 162 feet at this scale — the distance between 15th and 16th streets.
Of the eight planets in the solar system, Venus is our closest neighbor, the warmest planet, and also the most similar in size to Earth.
Mercury, our friend near the Sun, can be seen from Earth 13 times a century in an event called a “transit.” At 48 million miles away, you could walk from one end of Russia to the other (the long way) 8,000 times before you matched that.
And Mars is 34 million miles from Earth — a 300 day journey by space ship. At this scale it would be 4 feet in diameter and the trip would take you from Harlem to the High Line — a 35 minute commute (if there is no traffic).
Oliver Jeffers’ The Moon, the Earth and Us presented in partnership with the High Line, is a poetic exploration of the “Overview Effect” — a cognitive shift in perspective that is normally achieved after viewing Earth from a distance vast enough to see it in its entirety, and which brings and understanding that we are part of the larger reality of a single planet floating alone in the eternity of space. 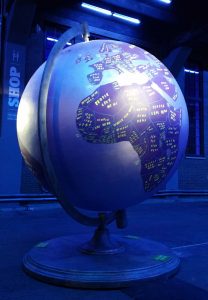 Seen here are two globes: Earth and its Moon, constructed to show their correct size and distance in relation to one another. In the 1960s, human s began the first explorations in to outer space, fueling our ever-present fascination with the Moon — the only close neighbor we have in an unfathomably vast solar system. But few have ever had the opportunity to fully comprehend its actual distance from us (238,900 miles) and its full size in relation to us (2,159 miles in diameter — the width of the USA).
The installation is made to coincide with the 50th anniversary of “Earthrise” — the first photograph ever taken of our planet in its entirety, shot during the Apollo 8 mission in the winter of 1968/69. Today only 533 astronauts have reached far enough into Earth’s orbit to oversee this phenomenon. All who have afforded such a perspective have come away with the poignant realization that one cannot see borders or regulations from outer space and an awareness that is only planet’s land masses — the select dry and habitable parts of our tiny and fragile globe — that humanity can survive on. People live here. And nowhere else.
Jeffers’ The Moon, the Earth and Us, invites you to take an imagined look at our home from afar while considering its interconnectedness as a single organism. Then, by venturing through this covered passage, it invites you to imagine the darkened journey from this planet to our only Moon.