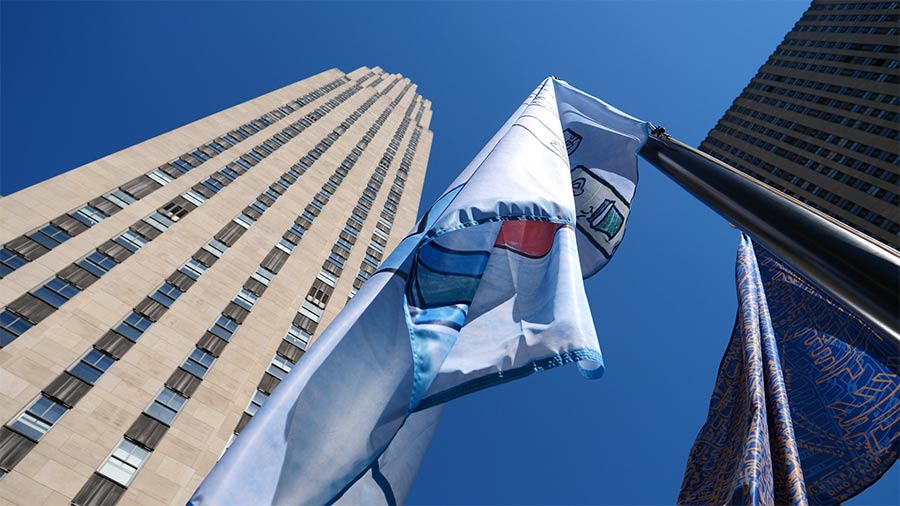 Rockefeller Center Partners With City Harvest For The Flag Project 2023

Submissions now open to the public through March 2

Videos from previous years’ Flag Projects can be found near the bottom of this page.

Celebrating New York City’s most memorable and diverse cuisine, selected artwork submissions from around the world will honor the city’s culinary discoveries at the reimagined Rockefeller Center

Submissions now open to the public through March 2

NEW YORK, Jan 24, 2022 — Today, Rockefeller Center announces its collaboration with City Harvest, the world’s first and the city’s largest food rescue organization dedicated to feeding New Yorkers in need, for its fourth annual The Flag Project. Each year, the crowd-sourced art exhibition invites the public to submit art in various mediums for consideration to be displayed on one of the 193 flagpoles that surround the iconic Plaza, with this year’s theme celebrating New York City’s global cuisine and international cultures. The flagpoles, traditionally adorned with the flags of the United Nations’ member states, will be flown at Rockefeller Center throughout the month of April, with a reveal event at Rockefeller Center on Saturday, April 1.

Home to some of the best restaurants in the world, this year’s theme commemorates New York City dining in its many forms. Participants and artists of all skill levels can submit artwork inspired by their most memorable food memories in the city — a first dinner upon moving to the city or an unexpected meal at a hole-in-the-wall restaurant to an unforgettable Michelin-starred meal at one of the city’s greatest restaurants. The 2023 Flag Project will also include artwork from several of the recently opened restaurants of Rockefeller Center’s burgeoning culinary community, including NARO’s husband and wife duo Jungyun ‘JP’ and Ellia Park; Ignacio Mattos of Lodi; Jupiter’s Clare de Boer, Jess Shadbolt and Annie Shi;  Le Rock’s Lee Hanson and Riad Nasr; Greg Baxtrom of Five Acres; Pebble Bar owners Matt Kliegman, Noah Bernamoff, Carlos Quirarte; Homer Murray of 21 Greenpoint; and Samesa’s Eli Sussman. Famed chefs, culinary personalities and notables such as Eric Ripert, Tom Colicchio, Andy Baraghani, Dana Cowin, Geoffrey Zakarian, Jenna Lyons, Eden Grinshpan, John Wang, Ted Allen and Mira Mariah will also submit their designs. Submissions are open now through March 2 on Rockefeller Center’s website and winning designs will be selected in partnership with City Harvest.

“Food brings families together and food brings our city together,” said Jilly Stephens, CEO of City Harvest, New York’s first and largest food rescue organization. “We are honored to partner with Rockefeller Center and some of our city’s best chefs and fellow New Yorkers to spotlight the foods that make our city the diverse, delicious place we call home. As millions of our neighbors struggle to put meals on their tables, City Harvest stands ready to rescue and deliver tens of millions of pounds of nutritious food New Yorkers need to thrive — one day, one meal, one New Yorker at a time.”

“We’re delighted to partner with City Harvest to give back to New Yorkers in need as part of this year’s Flag Project, which has quickly become one of Rockefeller Center’s most beloved annual events,” said EB Kelly, Senior Managing Director and Head of Rockefeller Center. “This past year has brought so many incredible culinary visionaries to our Rock Center campus from across New York City, and we look forward to continuing to highlight the rich diversity of the city’s culinary community with this year’s exhibition.”

Last year, The Flag Project partnered with the United Nations Environment Programme (UNEP) and the Climate Museum to commemorate the theme of “Only One Earth” for World Environment Day. The winning flags were transformed into eco-friendly, biodegradable flags and served as the center of Rockefeller Center’s Earth Day festivities which included free, public programming alongside the Climate Museum. Known for featuring notable artists from across a wide range of industries, The Flag Project’s past participants include Jeff Koons, Marina Abramovich, KAWS and more.

City Harvest is New York’s first and largest food rescue organization, helping to feed millions of New Yorkers who struggle to put meals on their tables. During our 40 years serving New Yorkers in need, we have rescued more than one billion pounds of fresh, nutritious food and delivered it—free of charge—to hundreds of food pantries, soup kitchens, community partners, and our own Mobile Markets® across the five boroughs. This year, we will rescue and distribute more than 75 million pounds of nutritious food to our neighbors in need. Named one of America’s Top 100 Charities by Forbes, City Harvest works alongside our community partners to boost community capacity, expand nutrition education, and strengthen local food systems. Since our founding in 1982, City Harvest has always been there to feed our city—one day, one meal, one New Yorker at a time. To learn more, please visit cityharvest.org.

Tishman Speyer is a leading owner, developer, operator and investment manager of first-class real estate in 30 key markets across the United States, Europe, Asia and Latin America. We develop, build and manage premier office, residential and retail spaces for industry-leading tenants, as well as state-of-the-art life science centers through our Breakthrough Properties venture. With global vision, on-the-ground expertise and a personalized approach, we are unparalleled in our ability to foster innovation, quickly adapt to global and local trends and proactively anticipate our customers’ evolving needs.  By focusing on health and wellness, enlightened placemaking and customer-focused initiatives such as our tenant amenities platform, ZO., and our flexible space and co-working brand, Studio, we tend not just to our physical buildings, but to the people who inhabit them on a daily basis. Since our inception in 1978, Tishman Speyer has acquired, developed, and operated 484 properties, totaling 219 million square feet, with a combined value of over $121 billion (U.S.). Our current portfolio includes such iconic assets as Rockefeller Center in New York City, The Springs in Shanghai, TaunusTurm in Frankfurt and the Mission Rock neighborhood currently being realized in San Francisco.

Video capture of the Flag Project 2021 at Rockefeller Center:

Deborah * Glenn Doering whose flag was chosen in 2020: