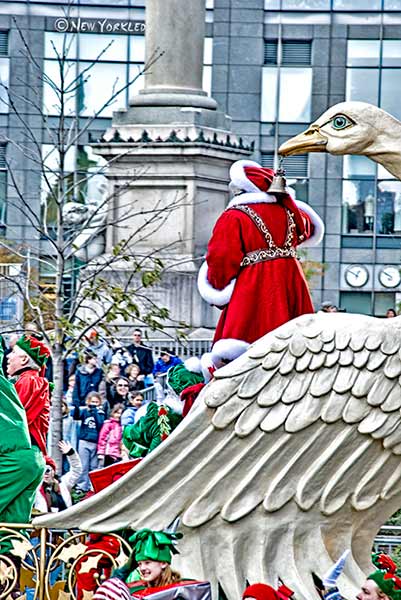 Floats Of Imagination Glide Down The Streets Of Manhattan

Note: All Talent, Performances, Elements And Information Included Are Subject To Change

Sesame Street, helping kids grow smarter, stronger, and kinder for nearly 50 years, will once again celebrate Thanksgiving on 34th Street. On the stoop of 1-2-3 SESAME STREET, fans of all ages will meet their favorite furry friends and cast as they celebrate the holidays, create heartfelt moments and build a lasting love of learning.

Float Facts: In 2016, Sesame Street is celebrating its 40th consecutive year in the Parade.

Performance by: Tony nominated Broadway actor CHRISTOPHER JACKSON with the cast and Muppets of Sesame Street

Hawaii’s rich flora is on display in King’s Hawaiian’s vibrant inaugural float. Rich with tropical flowers, plants, palm trees, white sands, and a confetti exploding volcano, the wonders of the islands are transported to New York City this Thanksgiving.

Float Facts: A real working waterfall will bring the magic of the Hawaiian Islands to millions as water cascades down three stories.

Performance by: Indie pop and neo-soul stars FITZ AND THE TANTRUMS

AT THE BALL GAME

Although baseball season is over, Cracker Jack popcorn and Macy’s want to give everyone one more chance to enjoy the ballpark. This three story float depicts the timeless American tradition being shared by a new generation of families.

Float Facts: The float includes live cameras for spectators to see themselves on a larger-than-life LED screen, above the stadium scoreboard.

Float Facts: A 30-foot inflatable apple is at the center of the float, depicting NYC’s signature skyline.

An art deco wonder, the Big City Cheer float salutes our sporting spirit and athletic successes. Joined by over 500 cheerleaders from across the nation, spreading holiday merriment, the float will also salute some of our heroes of Olympic sport.

Float Facts: The float uses a new LED technology that looks like neon, but with more luminosity and at less than 3% of energy consumption.

GIRL SCOUTS OF THE USA

Float Facts: If the giant world puzzle was made of typical jig saw pieces, it would be composed of more than 12,000 pieces.

CHINA’S CHENGDU—HOME OF THE GIANT PANDA

Millions will be transported to the Far East as they gaze upon the beauty of this magnificent float. Known as the home of the Giant Panda, Chengdu, the capital of Sichuan Province in Southwest China, is also famous for its natural, historical, and cultural sites. As the float makes its way down the route, spectators are sure to marvel at the architectural details and natural beauty of Chengdu’s UNESCO World Heritage sites of the Dujiangyan Irrigation System and the ancient Daoism mountain grounds of Mount Qingcheng.

Float Facts: The highlight of the float will be the whimsical depictions of the world-famous Giant Pandas that adorn the mountainous and water flowing landscapes of Mount Qingcheng and the Dujiangyan Irrigation System.

THE COLONEL’S ROAD TRIP TO NYC

The Colonel is back again! The float commemorates KFC’s legendary founder’s fascinating life and his famous friend chicken.  The Colonel embarked on an adventurous road trip from his Kentucky home to the Big Apple, with a pit stop in Nashville for an update on his iconic white suit. The float depicts milestones from the history of this American legend, like his original café in Corbin, Kentucky, the first KFC in Salt Lake City and the Colonel’s signature white limo, this float features a look back at the famed pioneer.

Ocean Spray and Macy’s celebrate a fall harvest tradition with THE CRANBERRY COOPERATIVE. Representing the 700 farmer families who own the Ocean Spray cooperative, a giant turkey and goose wade their way through an ocean of oversized cranberries to 34th Street just in time for Thanksgiving dinner.

Float Facts: The 18-foot tall turkey and goose are suited in XXXL waders standing in a bog of over 400 oversized cranberries.

Standing more than 30 feet tall, Balsam Hill’s “Deck The Halls” will embody all that is Christmas – from toys and decorated trees to entertainment and joy. Modeled after the traditional wooden pyramid, each of the three levels are hand-carved and hand-painted to encapsulate different aspects of the holiday season enjoyed around the world. At the base of the float, multiple Balsam Hill trees will be adorned with stunning decorations in different styles to showcase a host of family traditions. Whimsical, larger-than-life ornaments, toys and a snowman help capture the magic and joy of Christmas. The centerpiece of the float is a stunning carousel completing the wintery magic.

Float Facts: DECK THE HALLS is trimmed with more than 300 feet of garland and includes a Christmas tree three stories tall.

Kids and kids at heart are in for a special adventure as Build-A-Bear’s float returns for another holiday trek down Manhattan. Bearnard and his friends are heading on a Thanksgiving trip that takes them from outer space to a magical castle and more. Depicting several scenes of wonder – including bears riding ocean waves, captaining a sailboat and a friendly dragon – millions of children will be delighted to join the fun.

Float Facts: The float’s fence is made from giant popsicle sticks and crayons, the flowers are made of plates and bowls and the boat is constructed like a giant newspaper hat.

Performance by: CHICA, and her co-hosts CARLY, EMILY, KAITLIN, and TIM from Sprout’s Sunny Side Up and MICHELE LEPE from Nina’s World.

Hockey fans across the country get a front row seat to the NHL with the FROZEN FALL FUN float as they await the highly-anticipated 2016 Discover NHL Thanksgiving Showdown™. Kids take to the ice to try and test their slap shots against the giant Turkey tending goal.

Float Facts: The skating surface is made of synthetic ice, a hard surface that can be skated on.

Upside down cars, teetering towers of chairs, furniture glued to the ceiling, and other extraordinary demonstrations of the Krazy Glue brand’s strong adhesive ability will come to life aboard the new Krazy Glue float in the 90th Parade. Krazy Glue’s new float will make its inaugural trip down the streets of New York City as millions marvel at the outrageous display of kraziness.

Float Facts: The specially built house set piece includes a circular turntable that helps the family room rotate as it travels down the route.

Girl power returns to the Parade as GoldieBlox and her smart friends showcase the power of STEM (Science, Technology, Engineering and Math) aboard this engineering marvel. Children create energy by spinning, pulling, and rotating the GoldieBlox gears including a giant bicycle, oversized pinwheels, parachutes, a capstan crankshaft, and jogging wheels. The children will help animate the GoldieBlox float as it travels down the Parade route.

Float Facts: This is the first-ever Parade float designed to showcase the basic principles of engineering and to promote STEM education.

Countdown to Christmas has officially started. As the premiere destination for holiday entertainment, Hallmark Channel ushers in the holiday season with a traditional holiday countdown calendar, complete with surprises and treats every day from now until Christmas Day.

Float Facts: This is the tallest float in this year’s Parade at more than 3 stories.

Float Facts: The Gibson guitar at the centerpiece of the float is 33-feet long and 21-feet tall.

Celebrating the 75th anniversary of the completion of the Mount Rushmore National Memorial, as well as the 100thanniversary of the National Park Service this year, Parade spectators will once again get a special glimpse into South Dakota’s natural beauty and famed landmarks on this float.

Float Facts: In addition to the iconic Presidents, the float showcases Great Plains animals and the state’s American Indian legacy.

ON THE ROLL AGAIN

Replicating a classic wooden pull toy, Lewis the Duck and his family are once again gearing up for a Thanksgiving celebration. The Homewood Suites by Hilton mascot will pull his family in this three-part float all the way to Herald Square to meet Santa.

It’s time to BELIEVE, as the one-and only SANTA CLAUS makes his way down the Parade route to Macy’s Herald Square. Straight from his home at the North Pole, Santa will ride his sleigh through the streets of New York City, delighting children of all ages along the path. Depicting Santa’s magical night of travel around the globe on Christmas Eve, we see the famed Toyshop, his giant bag of toys, and the famous reindeer pulling the sleigh.

Float Fact: Santa’s Sleigh is the largest float in the Parade at 60-feet long, 22-feet wide and is 3 ½ stories tall.

Float Facts: Although you may remember Snoopy’s classic doghouse as red, in the original A CHARLIE BROWN CHRISTMAS film, it is blue, as it appears on the float.

Oh how sweet it is! Domino Sugar’s confectionary delight brings happy memories of baking desserts for the holidays with three stories of cookies and sweets. Featuring an oversized spoon stirring the cookie dough in a bowl, the treats are getting baked right on board, and can be seen rolling out one by one on a larger than life conveyor belt. With delectable treats so close you can almost touch them, this float instantly propels thoughts past Thanksgiving dinner, right to dessert.

Float facts: The 26-foot tall float features a giant turntable that transports the magical dough into the oven for a perfect baked treat.

Rising once again for the sewers to save the day, the Teenage Mutant Ninja Turtles –2016’s NYC Family Ambassadors – are set to protect the city from their longtime nemesis Shredder.

Float Facts: Against a theatrical cityscape, the float depicts rooftops, fire escapes, city window ledges and a zip line down the wires of telephone poles.

Tom Turkey takes his traditional place as the lead float in the 2016 Macy’s Thanksgiving Day Parade. Decked in autumnal hues, Tom Turkey will march down the route along with lifestyle maven SANDRA LEE, ushering in the Thanksgiving holiday for the nation.

Float Facts: Tom is 21-feet tall and 20-feet wide and his movements are animated by a series of cables, levers and pulleys.

Arrr Matey! Climb on board for the ultimate treasure hunt, as we crank up to flank speed on this schooner ship. Joining the Pirate captain on this Thanksgiving Day sail is his first mate Crunchy the Parrot who will lead the search for smart snacks and holiday treats.

Central Park’s iconic Gothic Bridge is the centerpiece of a winter wonderland panorama of this extraordinary float. Adorned with vintage streetlights, decorated Christmas trees, untouched snow and more, the wintery scene is one of the most beautiful that awaits visitors who jet to the city during the holidays.

Float Facts: The replica of the Gothic Bridge was painstakingly created by the artisans at Macy’s Parade Studio who studied the original to get all the details just right.

Ronald McDonald®, the world’s most famous clown, will ride down the Parade route in his one of a kind, Big Red Shoe Car.

The famed Nutcracker and Mouse King trycaloons take their return trip through Manhattan, joined by Mother Ginger in her debut Parade. The Nutcracker stars will delight millions, before heading south for the winter to Universal Orlando® Resort, where they will partake in the 15th Anniversary Macy’s Holiday Parade™ daily throughout the holiday season.

New York City Park Rangers and Police Officers make up an old fashioned cavalry as they ride down the route on horseback saluting Parade spectators along the way.

The always dapper American icon Mr. Peanut and his NUTmobile SHELL-ebrates his 100th birthday in style, as he returns to the line-up on Thanksgiving Day.