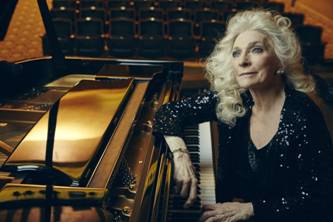 New York, NY— November 1, 2018 –  The Lincoln Square Business Improvement District (BID) announced today that Judy Collins will serve as the master of ceremonies for the  19th annual Winter’s Eve at Lincoln Square, joining headliner and fellow folk legend Arlo Guthrie on the main stage. New York’s largest holiday festival is produced by the Lincoln Square BID with presenting sponsor Related and will take place on Monday, November 26 from 5:30PM to 9:00PM. The festival features a diverse array of more than 20 free live, world-class musical performances, processional groups, dance performances, kids’ entertainment and activities, and more!
With a career spanning five-decades, Judy Collins has released an astounding 50-album body of work and is best known for hits including “Both Sides Now,” “Send in the Clowns” and her moving rendition of “Amazing Grace.”  At 79, Collins is as creatively vigorous as ever, writing, touring worldwide, and nurturing fresh talent. Her most recent single, “Dreamers,” tells the story from the perspective of a DACA dreamer’s mother. Collins continues to light up the music world with her unwavering talent, much like Winter’s Eve revelry lights up Lincoln Square for this special night.
Arlo Guthrie and the Guthrie family will headline the Upper West Side’s only holiday tree lighting ceremony and perform folk favorites and a variety of holiday classics, joined by the internationally and highly acclaimed Young People’s Chorus of New York City, at the Dante Park Main Stage (Broadway between 63rd and 64th Streets). In Winter’s Eve tradition, the ceremony will kick off the event, during which Judy Collins will serve as Master of Ceremonies and join WABC-TV to light up the Upper West Side live on Channel 7.After, the lively Frank London’s Klezmer Allstars and Latin boogaloo band Spanglish Fly will continue the celebration on the main stage.
The evening of merry-making will turn Lincoln Square into a small town for one night and is the perfect way for locals and visitors alike to immerse themselves in the holiday season. Attendees can stroll the sidewalks, public spaces and select shops on and around Broadway from Time Warner Center at Columbus Circle to 70th Street and enjoy live music and dance as diverse and cultural as New York City itself.
Jazz aficionados can enjoy performances by trumpeter, composer, arranger, and producer Maurice “Mobetta” Brown at the American Folk Art Museum on Columbus Avenue between 65th and 66th Streets. Or, head to the outdoor stage at Richard Tucker Park just across Columbus Avenue for more terrific music from trumpeter Theo Croker and his band—who is hailed as one of the great promises of Black American Music (BAM)—and NY based honky-tonk, cosmopolitan country band The Nashville Attitude.
Attendees with happy feet can head to the TD Bank Dance Tent, on 62nd Street just west of Columbus Avenue, which will feature the exciting and versatile Café Wha? Band to inspire dancing all evening. Rock, reggae, funk, rhythm and blues, Latin, folk, and pop songs flow seamlessly together, embodying the rich and diverse spirit of New York. DJ Tom Macari will keep things energetic in between sets.
For more jazz music, the Lucy Yeghiazryan Trio from Jazz at Lincoln Center will perform on the second floor of The Shops at Columbus Circle. Head to the David Rubenstein Atrium to hear Colombia-rooted, NYC-based four-piece band Combo Chimbita blending funk, cumbia, and more into their music. Plus, up at the Apple Store, Upper West Side (Broadway and 67th Street) a Steinway and Sons self-playing Spirio piano will be demoing for the evening with Apple-led programming.
In addition, multicultural dance troupes from Dance Parade will delight audiences on Frey Plaza (Broadway between 60th and 61st Streets). See choreography from: Steele Dance, a contemporary dance ensemble; Ajna Dance Company, an authentic Indian dance group; Red Silk Dancers, a Chinese classical and Folk dance group; and FFC Caporales Universitarios San Simon New York, a Bolivian dance fraternity.
As attendees wander the Lincoln Square neighborhood, there will be plenty of talent all around. Andrea Beeman, also known as the Enchantress of Bioluminosity, will roam the streets and share her elegant and ethereal dance style; Drawn Together will provide digital caricatures; the L Train Brass Band will parade up and down Broadway providing the fun sounds of NOLA to keep the music flowing through the streets; and street theater will be a central part of the festivities thanks to Processional Arts Workshop’s Giant Frost Puppets and Alice Farley’s Dance Theater.
On top of the outstanding line-up of entertainment, there will also be kids’ activities and performances, ice sculpting, and low-cost food tastings—so whether you are a foodie, a student, a retiree, a klezmer enthusiast, or just a local New Yorker celebrating the season, there is something for everyone at Winter’s Eve.
Winter’s Eve will take place rain, snow, or shine. Admission to Winter’s Eve is free, but event attendees are encouraged to bring and donate gently used or new coats of all sizes, especially children’s, to Dante Park at 63rd Street and Broadway as part of the 30th Annual New York Cares Coat Drive. For more information about the Lincoln Square BID’s Winter’s Eve, please visit: www.WintersEve.nyc or call 212.581.3774.