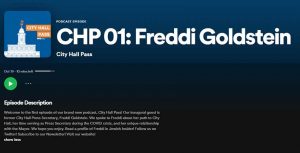 There’s a brand new podcast coming from NYC’s City Hall with the Counsel to the Mayor at the helm. Kapil Longani is hosting City Hall Pass and today, on its debut reveal, former Press Secretary Freddi Goldstein was on hand as its first guest.

“We created this forum, the first of its kind in NYC to provide you, the general public, with the unique window into the problem solving process at the highest levels of our city government – and to be able to share insights into key decisions as told by the trailblazing leaders who made them,” opened Mr. Longani.

The show, running at a near 44 minutes, was filled with nuggets that were enlightening and entertaining. We’ve highlighted merely a few of the subjects of special interest to us.

Ms. Goldstein spoke of how it’d been a long road to the Mayor’s office and how she first interviewed for the job of Communications Director for former Deputy Mayor Alicia Glen – and the many interviews she had to go through. She lost that job opportunity to another applicant. Yet, through their subsequent interactions with her they demonstrated their continued interest. This ultimately culminated in her becoming deputy press secretary and later, the Press Secretary to the Mayor.

“I would joke that my dad had a set of questions about work he would ask me like, ‘do you think you could ever get Eric’s (former Press Secretary Eric Phillips) job when he no longer has it’? And I would say, exasperated because we’ve been over it so many times, ‘no dad I’m never going to get Eric’s job and I don’t even know if I would want it if I could get it’ – and then of course, once you get it, I joke that when the Mayor offered me the job there was no moment of, so, are you taking it.’ Once he said, ‘we want you to be Press Secretary’ we never even had a follow up conversation about it, because once you’re offered the job, at least for me, you don’t turn it down.”

Mr. Longani brought up how the press’ relationship with the Mayor hasn’t been great. He asked Ms. Goldstein about her take on this.

She followed up by clarifying that such was not the case with every single reporter or outlet.

In consideration of how much time she gets to spend with him, she was asked about the Mayor, “How different do you think his real personality is from what people see in public?”

In her response, she explained how the Mayor is an incredibly hard boss – one in the stressful position of leading a city of 8.6 million inhabitants.

“I think what you get to see less of is his playful side. He loves to make jokes. He can be incredibly complimentary.”

When asked if she could talk about one her favorite days with the Mayor, Ms. Goldstein brings up a day from July 2019 during the height of Mr. de Blasio’s Presidential campaign. They’d visited the pool at Brooklyn’s McCarren Park.

“I’d never seen anything like what I saw at this pool. I’ve never seen anything like it. People were swimming from one end of the pool, and this is a huge pool … People were swimming from one end to the other just to reach their arm out of the water to try to touch his hand. And it was so special. I think I had been feeling especially low because the press had been really bad lately and it just felt like nothing was going the way I wanted it to be going, and when you’re in this job you can’t help but take all that stuff personally. It really affects you.”

“And suddenly, we were on the hottest day of the year. I’m sweating through my clothes but I was loving it because everyone at that pool wanted to come take a picture with him, they wanted to hug him. Kids were acting like their favorite movie star had just shown up … It really was just a beautiful day of a lot of people reminding me that what I read in the press every day and what I experience in my own world, my own universe is not necessarily representative of the entire city. When he went back to Gracie and I went home that day I was on a high for the first time in a long time. I think I still have the pictures on my phone. It’s something I won’t forget.”

Yours truly had a limited number of interactions with Ms. Goldstein in 2020 yet based upon my experiences, I wish there were more. She’s a professional and an ace representative of our city’s highest office. Thank you Freddi for your service and we wish you nothing short of success in your pursuits!

disappointed to learn I don’t have a voice for radio, but honored to be the inaugural guest on this podcast led by some of City Hall’s best and brightest. thank you, @NYCMayorCounsel! https://t.co/anE3XDgr1j

“It’s been an honor being part of this administration the last three years and getting to work on some of the things that matter the most to New Yorkers,” said incoming Press Secretary Freddi Goldstein. “I’m excited to take on this new role and look forward to continuing to do all we can to deliver even more for the people of this city.”

Freddi Goldstein joined Mayor de Blasio’s staff in 2016 as a Deputy Press Secretary where she communicated with members of the media about the city’s budget, major labor contracts, and NYC’s State and Federal legislative campaigns. Since 2018, she has served as the Communications Advisor to the First Deputy Mayor. During her tenure with the Mayor’s Office, she has helped develop and deliver communication strategy on critical initiatives like the plan to close Rikers Island, both campaigns to secure mayoral control of city schools, 3-K for All and passing congestion pricing to fund the subways. Before joining the administration, she was a Senior Associate at SKDKnickerbocker, where she advised clients on media relations, political communications and public affairs. She is a graduate of Tulane University.