NYC Mayor de Blasio: Goal is to Get to the Point Where We Really Can Test Everyone 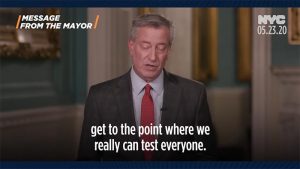 Numerous times in the past, NYC Mayor Bill de Blasio has stated how the ultimate goal, in the fight against the Novel Coronavirus Pandemic, is to be able to test everyone.

Some might consider that as a foregone conclusion considering the Governor and Mayor’s desires for massive state and city-wide testing. Yet, sometimes it needs to be spelled out for our communities. If you want them to participate in something that’s voluntary then you need to convince them as to the how’s and why’s, no?

I’ll be exploring further into the ‘WHY’ in another posting.

On May 17, I asked the mayor, “Do you hope for a day when every single New Yorker can be tested regardless of having ever been symptomatic or having ever been in touch with anyone who tested positive?”

The Mayor, “I would love nothing more than the day to come when that could be truly as universal as we want it to be.”

Today, the Mayor would answer a question posed to him by a member of the general public through his #AskMyMayor campaign.

“Why is there no free citywide testing for all residents of NYC?,” asked by someone named Kelly.

Within his response he makes statements related to the subject of this page.

But the good news is, now, the amount of testing is growing all the time. 20,000 test per day now available in New York City, all for free – and that is at over 150 sites citywide. We gained a lot of sites with our new partnership with CityMd and that’s fantastic.

So we’re not quite to the point where we can test everyone, obviously, and we can’t do it as often as we want to, obviously. But we are making a lot of progress and the goal is to get to the point where we really can test everyone. In the meantime, we have expanded our criteria recently. Anyone with symptoms of the Coronavirus, you can get tested at over 150 sites.  Anyone who’s had close contact with someone has has tested positive, obviously, we want to see those folks tested. Workers at homeless shelters, nursing homes, adult care facilities – in addition to our first responders, in addition to our health care workers – a lot of people in communities that are at the frontline of this crisis.

We’re welcoming so many people to come in and get tested. And look, Kelly, no one is turned away, obviously. So the important thing to know for anyone seeking testing is, you can to to nyc.gov/covidtest or, of course, call 311.”

Folks, keep in mind, that as per the State’s Department of Health as well as from the Governor’s own words, Healthcare Workers, those on the Front Lines as well as Essential Workers are eligible for free COVID-19 diagnostic testing sans the need for criteria. I did a write-up for Governor Cuomo’s original mention from April 25, plus I followed up this past week to explicitly explain who Essential Workers are and how it covered a vast number of New Yorkers.