Governor Cuomo on the Criminal Justice Discrimination: Yes the names change, but the color doesn’t. 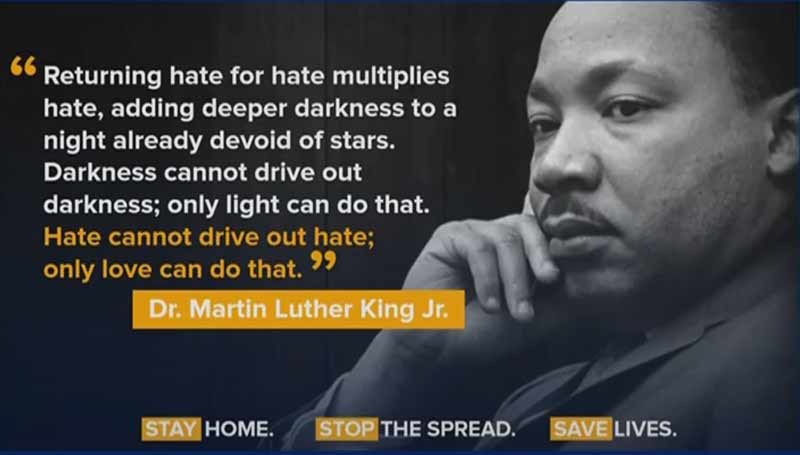 NY Governor Andrew Cuomo today would have words for the residents of New York and people from across the nation in the midst of the national racial crisis going on in America. The Governor would make a speech that made all too much sense and is merely one of the many we’ve all come to expect of the state’s leader. It was during his daily COVID-19 Response Press Conference which he presented from the Borough of the Bronx.

For days this past week, there’s been protests across the nation in response to the tragic death of George Floyd at the hands of Minneapolis Police Officer Derek Chauvin. Last night in New York City there were protests which escalated to riot-like scenarios with videos of police brutality circulating through the social media world. NYC Mayor Bill de Blasio addressed the situation last night from City Hall, as did the Governor during his press conference yesterday.

We thought to quickly transcribe the Governor’s words which were spoken only moments ago.

“For 90 days we were just dealing with the COVID Crisis. On the 91st day we had the COVID Crisis and we have the situation in Minneapolis the racial unrest around the George Floyd death.  Those are not disconnected situations. One looks like a public health system issue, but it’s getting at the inequality in healthcare also  on a deeper level – and then, the George Floyd situation which gets at the inequality and discrimination in the criminal justice system. They are connected.

The George Floyd death was not just about George Floyd and we wish his family peace and they’re in our thoughts and prayers – but we tend to look at these situations as individual incidents.  They’re not individual incidents. When you have one episode, two episodes, maybe you can look at them as individual episodes – But when you have 10 episodes, 15 episodes, you are blind or in denial if you are still treating each one like a unique situation. We have an injustice in the criminal justice system that is abhorrent. That is the truth. It doesn’t make me feel good to say that. I’m a former prosecutor. We have injustice in the criminal justice system which is the basic purveyor of justice in this society – and it’s not just George Floyd. You look back even at modern history, in my lifetime. This started with Rodney King. Rodney King was 30 years ago. We suffered in this city through Abner Louima, Amadou Diallo and Sean Bell and Eric Garner.

How many times have we seen the same situation? Yes, the names change, but the color doesn’t – and that is the painful reality of this situation – and it’s not just 30 years. It is this nation’s history of discrimination and racism dating back hundreds of years. That is the honest truth and that’s what’s behind this anger and frustration – and I share the outrage at this fundamental injustice, I do – and that’s why I say, I figurative stand with the protesters, But violence is not the answer. It never is the answer.

As a matter of fact, it is counter-productive because the violence then obscures the righteousness of the message and the mission, and you lose the point by the violence in response – and it allows people who would choose to scapegoat, to point to the violence rather than the action that created the reaction.   The violence allows the people to talk about the violence as opposed to honestly addressing the situation that incited the violence. The violence doesn’t work.

Martin Luther King, Doctor King, God rest his soul – He taught us this. He taught us this. He knew better than anyone who was speaking to us today on this issue. Returning hate for hate multiplies hate. Hate cannot drive out hate. Only love can do that. Yes outrage. Yes Anger. Yes Frustration. But not violence.

Last night we saw disturbing violent clashes from its protests right here in NYC and Brooklyn – and we all saw the video last night. I’m asking Attorney James to review the actions and procedures that were used last night, because the public deserves answers and they deserve accountability.

I spoke with Mayor. He wants an independent review of what happened yesterday. I agree – and we agree that the Attorney General is an independently elected official in the state of New York. Many other states the Attorney General is appointed by the Governor. Not here. She’s an independently elected official. She has proven herself competent and capable in being independent and we’re going to ask her to take a short period of time, review last night and to do a report to the public and let’s see what we can learn. What was done right, what was done wrong. Because people do deserve answers.”