Reiterates Call for Federal Funding for State and Local Governments

Hospitalizations Down to 706—New Low Since March 18 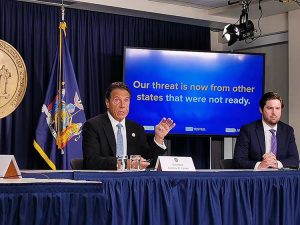 Governor Andrew M. Cuomo today announced that President Trump told him federal agents will not currently be sent to New York City. The president said he would discuss the deployment of agents with the governor before making a decision. New York State will continue to closely monitor the federal government for any changes in policy.

Governor Cuomo also announced the results of an expanded testing initiative within the New York State Department of Corrections and Community Supervision to test individuals 55 years and over. Of the nearly 4,000 individuals tested, 77 tested positive, resulting in a 1.9 percent infection rate.

The Governor also reiterated his call for the federal government to provide funding for state and local governments.

Governor Cuomo also launched a new ad campaign aimed at young people. The weekly average COVID-19 rate among 21 to 30-year-olds has increased to 13.2 percent from 9.9 percent.

The Governor also updated New Yorkers on the state’s progress during the ongoing COVID-19 pandemic. The number of new cases, percentage of tests that were positive and many other helpful data points are always available at forward.ny.gov.

“The President has suggested he would send federal agents to New York City. I spoke to the President about it, and I don’t believe there’s any justification to send federal troops or federal agents to New York City, and I told him that,” Governor Cuomo said. “There is no federal property that is in danger that could justify the federal government having to send agents. Constitutional law is clear on this. The nation does not have a federal police force to deploy at their discretion. Policing is left up to the states. The President and I had a good conversation. He said he would not be sending troops into New York City. He did not say period, ad infinitum, but he said that we would talk before he did anything.”

Today’s data is summarized briefly below:

Of the 69,698 tests conducted in New York State yesterday, 811, or 1.16 percent, were positive. Each region’s percentage of positive tests over the last three days is as follows:

The Governor also confirmed 811 additional cases of novel coronavirus, bringing the statewide total to 409,697 confirmed cases in New York State. Of the 409,697 total individuals who tested positive for the virus, the geographic breakdown is as follows:

Yesterday, there were 13 deaths due to COVID-19 in New York State, bringing the total to 25,081. A geographic breakdown is as follows, by county of residence:

NY Governor Cuomo Announces Greater Expansion on Reopenings The Governor today announced that increases in the amounts of attendance capacity for various venues and events...
Event

An American Pogrom: Reckoning With The 1921 Tulsa Race Massacre

Exploring Neuroscience And The Legacy Of The Holocaust

Don’t Let It Slip Through Your Fingers