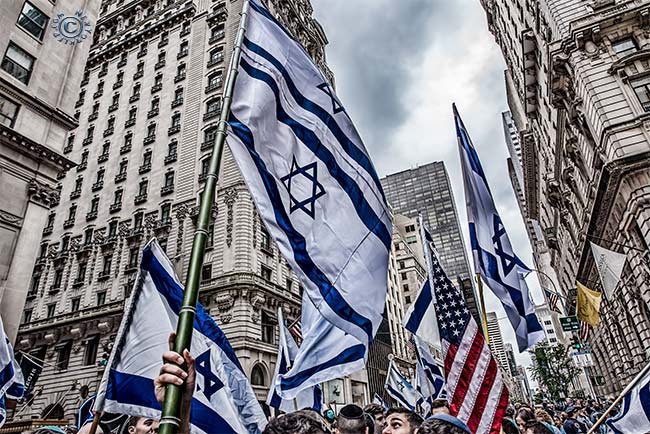 TV Personality and Author Siggy Flicker, Liel Leibovitz & Stephanie Butnick of the Unorthodox Podcast, and Sid Rosenberg of Bernie & Sid In the Morning

Fiddler on the Roof in Yiddish to be Performed Live

NEW YORK, N.Y. – May 23, 2019 – The Jewish Community Relations Council of New York
(JCRC-NY) today announced that Edward A. Mermelstein will lead the 2019 Celebrate Israel Parade as its Grand Marshal up Fifth Avenue on Sunday, June 2 in front of hundreds of thousands of spectators.  Joining him in leading the Parade as Honorary Grand Marshals will be Ted Comet, Founder of the Celebrate Israel Parade; Siggy Flicker, Author and TV Personality; Liel Leibovitz and Stephanie Butnick, Co-Hosts of the Unorthodox podcast, Sid Rosenberg, Co-Host of Bernie & Sid in the Morning.
The Parade is the largest public event celebrating Israel in the world highlighting Israel’s rich heritage, vibrant culture, and the positive impact the Jewish and democratic state of Israel has on the lives of people around the world.
More than 30 floats with musical performers, 15 world-class marching bands, and 40,000 marchers will march along Fifth Avenue, from 57th Street to 74th Street, and entertain hundreds of thousands of spectators. This year’s creative theme for marching groups and floats is “Only in Israel” from the renowned hebrew song Rak B’Yisrael.
A selection from the off-Broadway hit musical Fiddler on the Roof in Yiddish, will be performed live by cast members at this year’s Parade. Directed by Oscar and Tony Award-winner Joel Grey, the rich Yiddish translation of Fiddler on the Roof by Shraga Friedman, adds new depth and dimension to the most well-known Jewish musical in the world, telling the beloved story of a community and its struggle to balance traditions and desires in a changing world.
Grand Marshal Edward A. Mermelstein – Edward A. Mermelstein is an accomplished top-tier legal strategist, businessman, consultant, investor, and developer in NYC. He is founding partner of One & Only Holdings, LLC, which includes One & Only Realty, and former partner at Rheem Bell & Mermelstein, LLP.  As Chairman of COJECO, Edward helps facilitate the integration of Russian-speaking Jews into the greater American Jewish community while preserving their cultural heritage. As President of Zaka Search and Rescue, Edward leads an UN-recognized NGO, with thousands of volunteers, on call to respond to man-made or natural disasters. Edward has served on the Boards of UJA-Federation of New York, RAJE, and other charitable organizations. Fluent in English and Russian, Edward emigrated to the U.S. in 1976. In addition to his work, he is involved in numerous charitable organizations supporting local as well as national causes rooted in culture, politics, education and the arts. Edward lives in NYC with his wife, Rose, a Broadway producer and five-time Tony award winner, and his two sons.
Honorary Grand Marshal Ted Comet – Ted Comet is a Founder of the Celebrate Israel Parade and was Chairman of the Parade (1966-68).  Comet, a veteran Jewish community leader, was director of the American Zionist Youth Federation at the time the Parade was created in 1965 and was seeking ways to express support for the Jewish state. He was also a key official of the Council of Jewish Federations and the American Jewish Joint Distribution Committee.
Honorary Grand Marshal Siggy Flicker – Sigalit “Siggy” Flicker is a relationship specialist, matchmaker, author, and former cast member on reality-TV show The Real Housewives of New Jersey. Flicker was born in Israel to Jewish parents and was named after the Hebrew word for “violet.”
Honorary Grand Marshal Sid Rosenberg – Rosenberg is a radio personality and one of the most celebrated names in sports broadcasting.  He is currently co-host of Bernie and Sid in the Morning on 77 WABC Radio.  He also hosts Sid Sports Sunday, on which he delivers sports news, reviews the games of the week, interviews big names from the sports industry, and provides the best picks for fantasy teams.
Honorary Grand Marshal Stephanie Butnick – Stephanie Butnick is a deputy editor for Tablet Magazine and co-host of Unorthodox. She has a bachelor’s degree in religion from Duke and a master’s in religious studies from NYU. She lives in New York with her husband and their cat, Cat Stevens.
Honorary Grand Marshal Liel Leibovitz – Liel Liebovitz is a senior writer for Tablet Magazine and co-host of Unorthodox, the world’s leading Jewish podcast. He is also the author or co-author of seven books, including, most recently, A Broken Hallelujah: Rock n’ Roll, Redemption, and the Life of Leonard Cohen. A native of Tel Aviv and a veteran of the Israel Defense Forces, Liel lives in Manhattan with his wife Lisa, a senior editor at Scholastic, and their two children.
Among the many bands and entertainers joining the Parade this year, featured guests include:

The Parade will be televised live from 12-3pm on FOX affiliate, WWOR-TV My9 and for the first time on Jewish Broadcasting Service on cable TV. The Parade will also be streamed online at celebrateisraelny.org so that Israelis and Israel supporters throughout the world can tune in.  The Celebrate Israel Parade Broadcast is sponsored by Friends of Maimonides Medical Center.
For the latest information, please visit the Parade website at celebrateisraelny.org, follow us on Twitter @celebrateisrael, visit our Facebook page: Celebrate Israel Parade and subscribe to our YouTube Channel: www.YouTube.com/CelebrateIsraelNY.

About the Celebrate Israel Parade

The Celebrate Israel Parade highlights the vibrant and diverse State of Israel. The Parade features over 40,000 marchers from many organizations. Hundreds of thousands enthusiastic spectators watch American and Israeli community leaders and dignitaries, entertainers, artists, musicians, dancers, celebrities, floats and marching bands. Many more watch on the live broadcast via television or live-stream. The Parade is produced by the Jewish Community Relations Council of New York (JCRC-NY), in cooperation with UJA-Federation of New York and the State of Israel.