Grand Opening Of The Statue Of Liberty Museum + Videos and Photos

Rendered photos come to us courtesy of the official site here…

New Museum Celebrates The Statue Of Liberty’s History, Influence, And Legacy In The World

Find below videos as well as featured by the folks responsible for this new featured attraction:

Some photographic renderings as well: 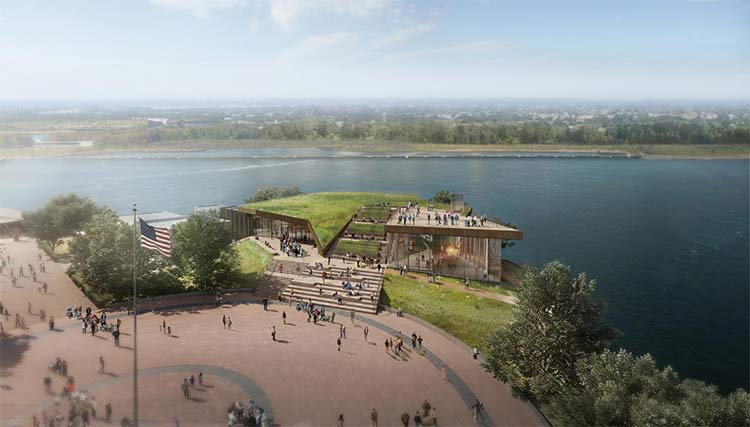 This new attraction will feature the following:

The Immersive Theater is a dramatic, multimedia experience lasting approximately 8-10 minutes that surrounds visitors in the sweeping story of the Statue and the ideal she represents. Weaving through this soaring theater space, museum-goers will learn the rich story of the Statue’s origins and be captivated by a virtual fly-through ascending the Statue that recreates interior views and sounds. Visitors will be invited to contemplate Liberty today and its measures around the world, such as access to education, free elections, and a free press.

In this gallery, visitors will be able to explore what took place in the warehouse where Frédéric-Auguste Bartholdi built the Statue. A series of multimedia displays evoke the feeling of being in the sculptor’s studio, allowing guests to see the step-by-step process of Liberty’s construction, from small plaster model to the copper sheets pounded on massive negative molds to create the Statue’s final form. Throughout this section, visitors delve deep into stories about the Statue’s history, design, and role in the world, exploring the multifaceted, sometimes contested ideal of Liberty through artifacts, graphics, and interactive media.

In this awe-inspiring space, visitors can reflect upon what they have seen and experienced in the museum. Guests will be invited to document their visit and express their views by adding a self-portrait and collage of inspirational images to an ever-growing digital experience called Becoming Liberty. The tour culminates with an up-close view of Liberty’s most iconic symbol – her original torch – held high for nearly 100 years and still a touchstone of the light Liberty shines from generation to generation. Rescued from the elements and replaced in 1986, the torch will be the most powerful artifact visitors encounter as they reach the end of their museum experience. A model of the Statue’s face offers another tactile moment and the glass walls afford magnificent views of the Statue of Liberty herself set against a stunning backdrop of the New York City skyline.
The Statue of Liberty Museum was conceived as a garden pavilion that would add to the experience of all visitors to Liberty Island, regardless of age or nationality. Merging landscape and building, the new museum’s roof is planted with native meadow grasses and offers visitors sweeping, panoramic views of Lady Liberty, lower Manhattan, and all of New York Harbor.
Access to the museum is free with the purchase of a ferry ticket to Liberty and Ellis Islands. Tickets start at $18 for adults, $14 for seniors, and $9 for children ages 4-12. Children under 4 are free. Tickets include access to the ground of Liberty Island and Ellis Island. Audio tours of Liberty and Ellis Island are included. Tickets can be purchased at www.statuecruises.com. Ferries depart from Battery Park in New York City and Liberty State Park in Jersey City, NJ.
The new museum is part of a $100 million Liberty Island-wide beautification effort that’s being funded by the Statue of Liberty-Ellis Island Foundation, led by campaign chairperson Diane von Furstenberg. The museum was designed by architecture firm FXCollaborative with exhibits created by experience design firm ESI Design. The structure is being built by Phelps Construction Group. SBI Consultants serves as the owner’s representative coordinating activities among all stakeholders.
Rizzoli New York will publish The Statue of Liberty: The Monumental Dream, the official catalogue to the museum’s opening, on May 14, 2019. Both hardcover (ISBN: 978084786730 / $50 US) and paperback (ISBN: 9780847867295, $29.95 US) editions will be available wherever fine books are sold. www.rizzoliusa.com
For more information about the Statue of Liberty Museum or visiting Liberty Island go to statueoflibertymuseum.org and follow the Foundation on social media atFacebook.com/StatueEllisFdn, Twitter @StatueEllisFdn, and Instagram@StatueEllisFdn.

ABOUT THE STATUE OF LIBERTY-ELLIS ISLAND FOUNDATION, INC.

The Statue of Liberty-Ellis Island Foundation, Inc. is a non-profit organization established in 1982 to raise funds for and oversee the historic restoration and preservation of the Statue of Liberty and Ellis Island. For more than 35 years the Foundation has collaborated with the National Park Service/U.S. Department of the Interior in what has become the most successful public-private partnership in U.S. history, having raised hundreds of millions of dollars. In addition to restoring the monuments, the Foundation created museums on both islands, The American Immigrant Wall of Honor®, the American Family Immigration History Center® and The Peopling of America Center®, which in 2015 transformed the museum on Ellis Island into the Ellis Island National Museum of Immigration. The Foundation is now overseeing the fundraising and construction of the new Statue of Liberty Museum scheduled to open in 2019. The organization’s endowment has funded over 200 projects that support these national treasures.