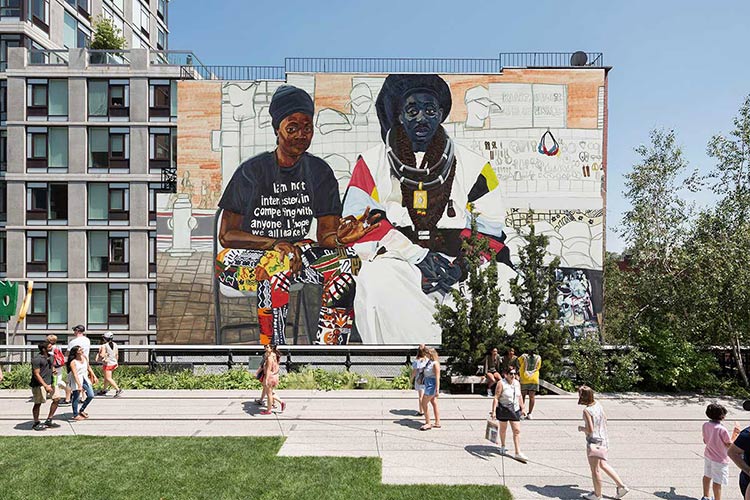 New York, NY (December 16, 2019)— High Line Art announces The Baayfalls, a new High Line Commission by artist Jordan Casteel. For the High Line, a large-scale mural recreating Casteel’s 2017 oil painting of the same name will be hand-painted on a wall overlooking the park near 22nd Street. The mural, on view December 2019 through December 2020, will be the largest presentation of Casteel’s work to date and her first public artwork. Previously, the location featured works by Dorothy Iannone, Henry Taylor, Barbara Kruger, and other well-known artists.
Jordan Casteel is best known for her portraiture. Her vibrant, larger-than-life canvases portray the gazes, gestures, and lives of the individuals who surround her, including family, friends, her students, fellow subway riders, and people she meets on the sidewalk. Casteel works from hundreds of photographs, which allow her to spend hours incorporating the many small details that bring her paintings to life. She paints her subjects as they choose to be seen in their homes or places of work—with friends or family, and the objects that surround them. Inspired by painters such as Alice Neel and Faith Ringgold, Casteel thinks through histories of portrait painting and the ways it creates the world as much as reflects it.
The Baayfalls is a double portrait of Fallou—a woman Casteel befriended during her artist residency at The Studio Museum in Harlem—and Fallou’s brother, Baaye Demba Sow. The pair are pictured outside the museum at Fallou’s table, where she sold hats she designed. When Fallou’s brother arrived in New York from Senegal, Casteel asked the two to sit for a portrait. The title references Baye Fall, a sect of the Sufi brotherhood Mouride, of which Fallou’s brother is a member. The gesture Fallou makes with her left hand signifies Allah among members of Baye Fall. Casteel’s work for the High Line extends the Harlem sidewalk to the park, connecting public spaces of different neighborhoods across the city. Through her portraiture, Casteel adds deeply nuanced expressions of human experience to the expanding collection of images we see every day.
“Through the subjects she selects and the layers of details and narratives she embeds in her canvases, Jordan Casteel portrays a timely reflection of our contemporary life,” says Cecilia Alemani, the Donald R. Mullen, Jr. Director & Chief Curator of High Line Art. “It’s an honor and a joy to introduce her solemn yet warm painting The Baayfalls to the public space of the High Line.”