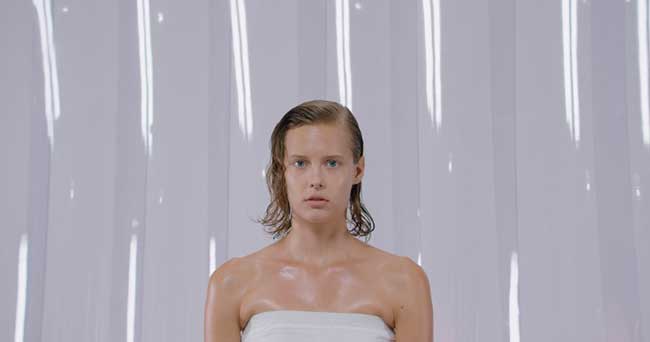 On The High Line At 14th Street

New York, NY (September 27, 2017) – Presented by Friends of the High Line, High Line Art is pleased to announce Video Narcissism, an exhibition in video format to be screened on High Line Channel 14, a series of outdoor projections of art videos in the semi-enclosed passageway on the High Line at 14th Street. “Video: The Aesthetics of Narcissism” is a 1976 essay by Rosalind Krauss that articulates what Krauss perceived to be the narcissism inherent to video as a medium. Channeling the aesthetic of direct confessionals common across reality television and YouTube video journals, the artists featured in this program speak directly to the camera.
Lex Brown’s (b. 1989, Oakland, CA) video Lip Gloss Alurt (2017) is an account of a 27-year-old woman who is reported to have lost her mouth after staring too long at herself in her phone. In the work, the woman states she was “afraid of transforming into a reflection of the world, but could not resist its fearful pull.”
Xavier Cha (b. 1980, Los Angeles, CA) presents her work Abduct (2015), in which actors stare directly into the camera, their facial expressions changing based on scripted cues of different emotions such as jealousy, disappointment, or surprise, pointing toward the level of reality and reliance we now place on the images of ourselves we create on screens.
Katrín Inga Jónsdóttir Hjördísardóttir (b. 1982, Reykjavik, Iceland) shows it is all my fault (2013), a video in the style of a YouTube confessional or video journal entry, in which she apologies profusely for “all the unhappiness, for the pain, for the fear… for the loneliness” in the world – admitting that it is all her fault, in a way that suggests a repentant deity or a remorseful child.

Presented by Friends of the High Line, High Line Art commissions and produces public art projects on and around the High Line. Founded in 2009, High Line Art presents a wide array of artwork including site-specific commissions, exhibitions, performances, video programs, and a series of billboard interventions. Curated by Cecilia Alemani, the Donald R. Mullen, Jr. Director & Chief Curator of High Line Art, and produced by Friends of the High Line, High Line Art invites artists to think of creative ways to engage with the uniqueness of the architecture, history, and design of the High Line and to foster a productive dialogue with the surrounding neighborhood and urban landscape.
Major support for High Line Art comes from Donald R. Mullen, Jr. and The Brown Foundation, Inc. of Houston. Additional funding is provided by The Andy Warhol Foundation for the Visual Arts. High Line Art is supported, in part, with public funds from the New York City Department of Cultural Affairs in partnership with the New York City Council and from the New York State Council on the Arts with the support of Governor Andrew Cuomo and the New York State Legislature.
For further information on High Line Art, please visit art.thehighline.org.
Image: Xavier Cha, Abduct, 2015 (still). Digital HD video, color, sound; 12 minutes, 13 seconds. Courtesy of the artist

ABOUT FRIENDS OF THE HIGH LINE