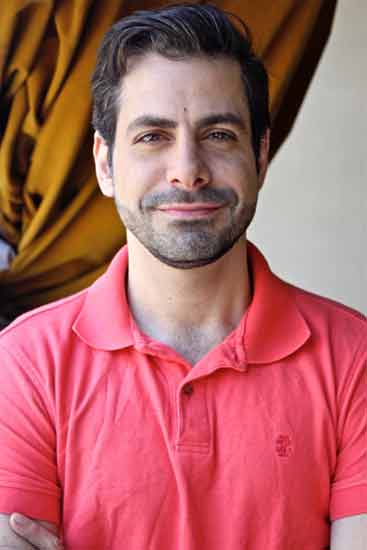 The Tank (Meghan Finn and Rosalind Grush, Artistic Directors) will present the World Premiere of Brazillian playwright Rodrigo Nogueira’s dark comedy, The Ideal Obituary at The Tank (312 West 36th Street between 8th and 9th Avenues) March 8-24. Performances will be Thursday through Saturday at 8pm. Tickets ($20/$15 students & seniors) are available for advance purchase at www.thetanknyc.org.
The years have passed and the violence has escalated, but it seems like we are getting used to it. We hear the news, we make a comment or two on social media, and we move on. But at what cost? Has social media made us so self-absorbed that we’ve lost the ability to see the world? Have we been bombarded with so many images, posts, and tweets that we’ve lost all perspective? Are we becoming numb to reality?
In The Ideal Obituary a woman is emotionally numb due to a severe depression. Her husband comes up with a plan to bring back her feelings; he takes her to funerals to make her cry. The Ideal Obituary is a dark comedy that pushes the audience to their limit of tolerance of when something stops being funny, and becomes unbearably serious.
The cast will feature Liliana de Castro (2017 International Emmy Award nominated Best Drama Series, Psi on HBO Latin America) and Kevin Loreque (Stephen Speilberg’s The Post) with Costume and Set Design by Anderson Thives (internationally renowned collage artist and Brazilian set designer), Lighting Design by Kia Rogers (NYIT Award Winner for Jane The Plain with Flux Theatre Ensemble), and Assistant Director Valeri Mudek.
Rodrigo Nogueira (Writer/Director) is a Brazilian playwright, screenwriter, lyricist, director, and former performer. Rodrigo has had fifteen straight plays and four musicals produced in Brazil. He received both Shell and APTR awards (the two most important in Brazil) as best writer. Brazil’s most important theater critic Barbara Heliodora considered his work “a milestone in Brazilian playwriting.” As one of the curators of “Teatro Ipanema” in Rio de Janeiro, Rodrigo stimulated artistic diversity with a special programming aimed for the “favelas”, the underprivileged communities of Rio. In television he was part of the writing team of the Brazilian version of Ugly Betty. In film, his credits include the Brazilian romantic comedy Women Overboard (among the top 10 box office movies in 2015). Recently, he has moved to New York where he has been working on the screenplays The Movie of Your Life, I love my cancer and the play The Ideal Obituary. He is also writing a junior musical licensed by the Gershwin Estate. www.thisisrodrigo.com
The Tank is a non-profit arts presenter serving emerging artists engaged in the pursuit of new ideas and forms of expression. We serve over 1,000 artists every year in over 400 performances, and work across all disciplines, including theater, comedy, dance, film, music, public affairs, and storytelling. Our goal is to foster an environment of inclusiveness and remove the burden of cost from the creation of new work for artists launching their careers and experimenting within their art form. The heart of our services is providing free performance space in our 98 seat proscenium and 56 seat blackbox that we operate in Manhattan, and we also offer a suite of other services such as free rehearsal space, promotional support, artist fees, and much more. We keep ticket prices affordable and view our work as democratic, opening up both the creation and attendance of the arts to all. Since its founding in 2003, artists who have come through The Tank include Alex Timbers, Amy Herzog, Lucy Alibar, Mike Daisey, Reggie Watts, Kyle Abraham, Andrew Bujalski, We Are Scientists, and tens of thousands of others. www.thetanknyc.org