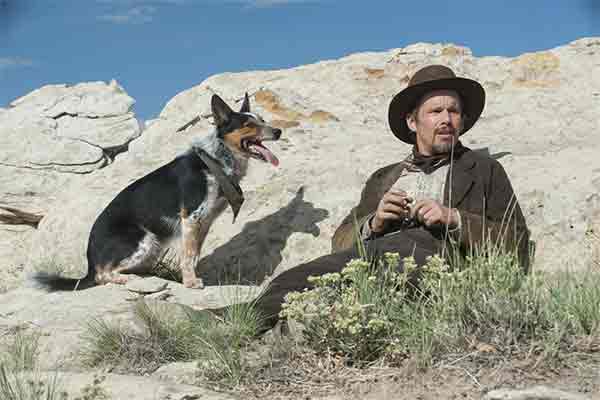 In the Valley of Violence

Had caught a press preview of this film two months ago and I’ve gotta say. It was a veritable disaster. Quite possibly we’ve the, ahem, writer, director and editor to thank for trying to wear too many hats in the making of this film. So bad was it that at the end of the film I couldn’t resist turning around to the woman sitting behind me who was laughing almost uncontrollably. “It’s bad…this film is so bad,” is what she was able to squeeze out amidst the chuckles. Honestly, I’d have given this wreck a passing grade IF I’d known a High School Performing Arts Production team was behind it. Alas that wasn’t the case.

Should you have the chance to see this mess then all I can say is, make sure it’s free. Otherwise, don’t bother! Ti West seems to have thought it a novel idea to try and take the styles of Quentin Tarantino, Sergio Leone and Mel Brooks and mash them up all into one. It might’ve worked if he’d had the slightest clue. Unfortunately he didn’t. The timing was consistently off; so much so, that what might’ve and could’ve passed for comic relief fell and felt painfully flat. It wasn’t merely comedy that suffered from the poor direction, but as well the possibility of us, the audience even giving a damn about a single character. Certain speeches were drawn out to exhaustion as were some lingering camera moments. It’s as if the entire film set were awaiting the filmmaker’s decision as to what would come next. Short of the words which emanated out of the character Gilly’s mouth, played by James Ransone whom I’ll get to in a moment, the writing/dialogue were nothing to write home about. Neither was the semblance of originality or the lack thereof.

Then there were the opening credits’ music. There I was sitting, or rather cringing at the opening credits as a howl that was all too reminiscent of Sergio Leone’s films blared across the room. I knew at that very moment that the film better be, either, an awesome parody, or something so powerful as to garner the admiration of any self-respecting Leone fan. It was neither. Have I mentioned it was a mess? It boggles the mind how many awful items have come across the big screen in recent months and perhaps even years.

I can’t help make a connection with Cooties; another mess that had no idea what it wanted to be. Although, at least that film was consistent in its timing. While I’m at it, I might as well bring up yet another one, Cop Car. A flick that really wasn’t all that bad. Starring Kevin Bacon and two kids who’d demonstrated through their performances how they just might have a future in acting. Interestingly enough, that film went straight to video; an unwarranted deed when compared to the fact that Valley of Violence is not only getting a premier but had, a month or so ago, received praise from numerous reviewers over at rotten tomatoes. I’m happy to see, as of this writing, that the score’s dropped from the high 90 percentile to the mid 70s. If there were any justice in this world films such as this one would never see the light of ticket purchasing days and unsuspecting folk wouldn’t be steered like lamb onto the slaughter of a hatchet attempt of a film like this one.

Now, I’d be really wrong not to make mention of two performances. James Ransone has got quite a future methinks if his performance in this film were any indication of what he’s capable of. Seriously, he alone could’ve carried the entire film, that is, IF the camera had never strayed from his presence. Of course I may be exaggerating just a bit there, BUT the man’s got talent to spare and his own dose of great timing; the sort which with a little bit of help could’ve salvaged this film. Unfortunately, the camera just had to deprive us of what could’ve been. As a side note, Mr. Ransone had also starred with Ethan Hawke in Sinister.

Another honorable mention would have to go to Jumpy who gave us a howling great performance. Regrettably we were robbed of his screen time as well.