The below press release issued by the NYC Council Speaker’s Office is a reference to the Temporary Field Hospital put up in Central Park on March 31 and the ensuing concerns over the politics of the organization which put it place, Samaritan’s Purse.

New York, NY – “It is time for Samaritan’s Purse to leave New York City. This group, which is led by the notoriously bigoted, hate-spewing Franklin Graham, came at a time when our city couldn’t in good conscience turn away any offer of help. That time has passed. Their continued presence here is an affront to our values of inclusion, and is painful for all New Yorkers who care deeply about the LGBTQ community.

“I am aware that our battle against COVID-19 is still ongoing, and that our health care system – and the amazing workers who have been the heroes of this unprecedented time in our history – still needs support. At the City Council, we are committed to supporting those workers and protecting our city’s public health. But as a city that values diversity and compassion for all, we cannot continue to allow a group with the track record of Samaritan’s Purse to remain here when we are past the point they are needed.

“Mount Sinai must sever its relationship with Samaritan’s Purse. Its leader calls the LGBTQ community ‘detestable’ and ‘immoral.’ He says being gay is ‘an affront to God,’ and refers to gay Christians as “the enemy.” Samaritan’s Purse requires its volunteers to agree to a written affirmation ‘that marriage is exclusively the union of one genetic male and one genetic female.’ Hate has no place in our beautiful city.”

The following would be the series of tweets posted by Mr. Johnson today. 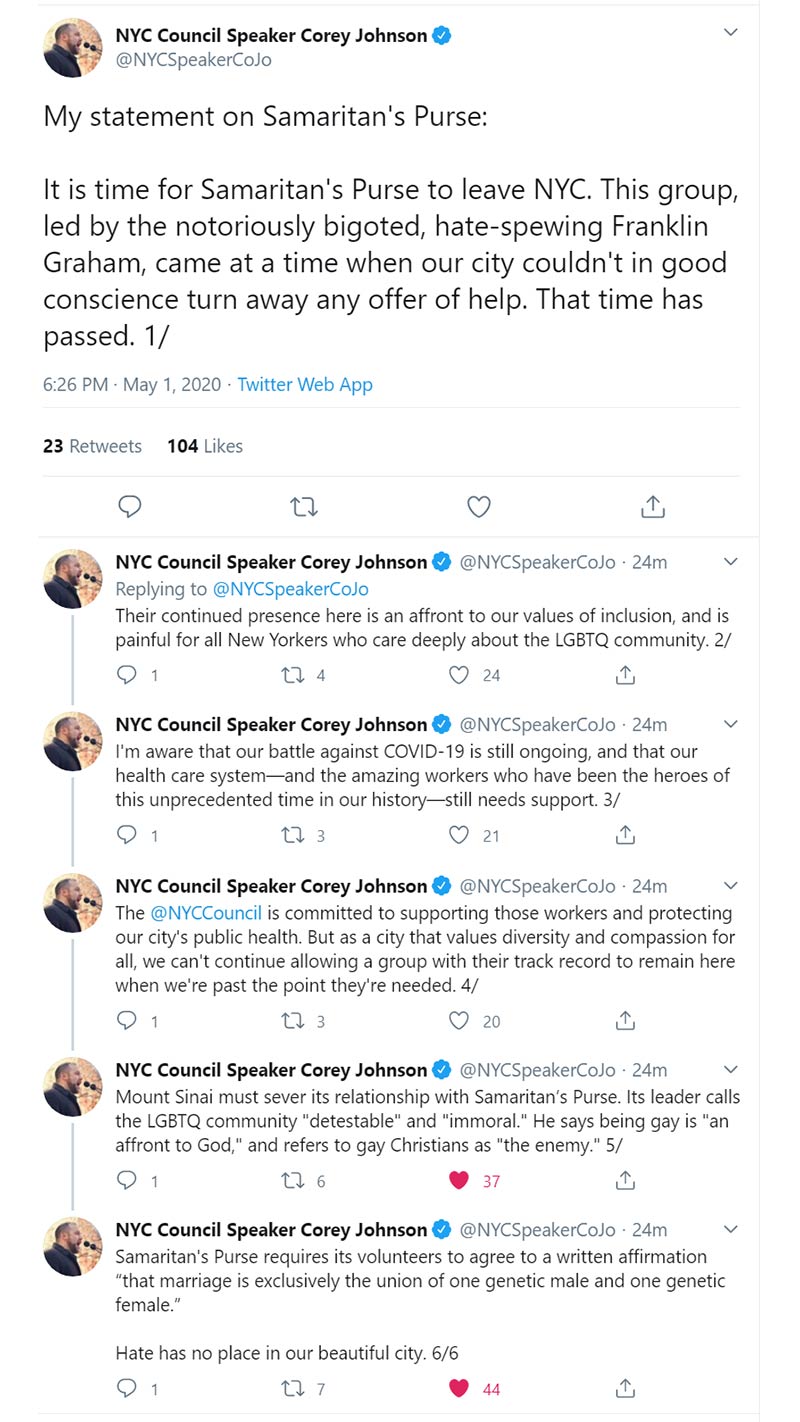 LGBT Related Manhattan
Share. Facebook Twitter Pinterest LinkedIn Tumblr Email
Previous ArticleNYC Crime for Week ending April 26: Transit Crime not as Extraordinary as Being Made Out to Be
Next Article It’s a Mad, Mad, Mad and EMPTY New York City