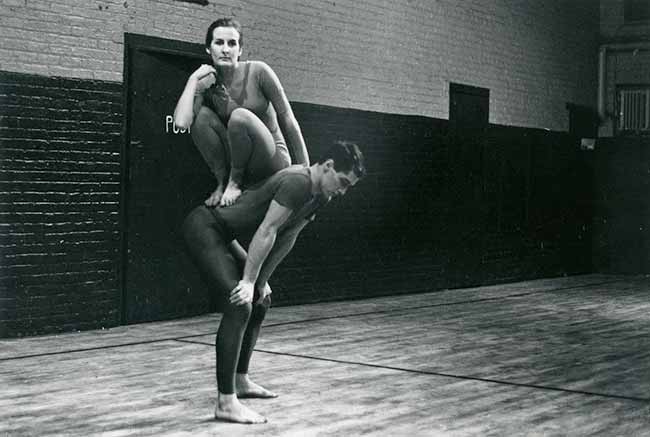 The Museum of Modern Art announces

NEW YORK, January 17, 2018 — The Museum of Modern Art announces Judson Dance Theater: The Work Is Never Done, a major exhibition that will look anew at the unique moment in the 1960s when a group of choreographers, visual artists, composers, and filmmakers made use of a local church to present groundbreaking cross-disciplinary performances. With a gallery exhibition, a print publication, and an ambitious performance program in the Museum’s Donald B. and Catherine C. Marron Atrium, The Work Is Never Done will feature celebrated dance works from the 1960s and ’70s by Judson artists. On view from September 16, 2018, through February 3, 2019, the exhibition will highlight the group’s ethos of collaboration and the range of its participants through live performance and some 300 objects including film, photographic documentation, sculptural objects, scores, music, and archival material. Judson Dance Theater: The Work Is Never Done is organized by Ana Janevski, Curator, and Thomas J. Lax, Associate Curator, with Martha Joseph, Curatorial Assistant, Department of Media and Performance Art.
Redefining the kinds of movement that could count as dance, the Judson artists would go on to profoundly shape all fields of art in the second half of the 20th century, prompting Village Voice critic Jill Johnston to declare their work the most exciting new developments in dance in a generation. These artists include Trisha Brown, Lucinda Childs, Philip Corner, Bill Dixon, Judith Dunn, David Gordon, Alex Hay, Deborah Hay, Fred Herko, Robert Morris, Steve Paxton, Rudy Perez, Yvonne Rainer, Robert Rauschenberg, Carolee Schneemann, and Elaine Summers, among others. Taking its name from the Judson Memorial Church, a socially engaged Protestant congregation in New York’s Greenwich Village, Judson Dance Theater was organized as a series of open workshops from which its participants developed performances. Together, the artists challenged traditional understandings of choreography. They employed unconventional composition methods to strip dance of its theatrical conventions, incorporating “ordinary” and more spontaneous movements—gestures typical of the street or home, for example, rather than a stage—into their work, along with games, simple tasks, and social dances.
Titled after a phrase used by choreographer Steve Paxton, The Work Is Never Done reflects both the Judson group’s spirit of experimentation and inquiry and the ongoing importance of their work today. The exhibition will begin with the workshops in which many of its artists participated— including Anna Halprin’s improvisation classes in Northern California and pianist Robert Ellis Dunn’s teaching sessions, based on his work with composer John Cage at the studio of his collaborator and partner, choreographer Merce Cunningham. Placing Judson within New York’s burgeoning Downtown cultural scene—from free jazz to community protests against real estate speculators—the exhibition also examines the influence of figures such as Simone Forti and Andy Warhol, as well as venues for collective action like Judson Gallery, the Living Theater, and others.
The exhibition will be accompanied by a fully illustrated catalogue with contributions from curators, art historians, contemporary artists, and performance scholars.