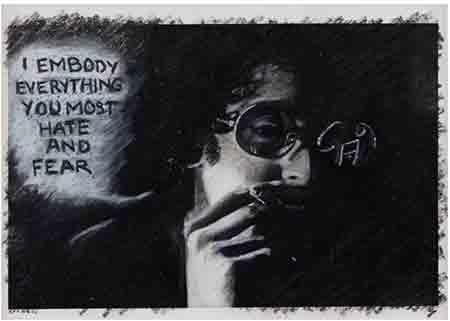 Opening Reception: September 14, 6:00 – 8:00 pm
909 Madison Avenue, New York City
New York, NY— Lévy Gorvy will present its first solo exhibition with acclaimed Conceptual artist and philosopher Adrian Piper, opening on September 14th. This focused presentation will include examples from the Mythic Being series (1973–1975), It’s Just Art (1980), and Here, an installation work conceived in 2008 and realized for the first time at the gallery’s New York location. Together, these three bodies of work delve into interrelated themes Piper has explored throughout her career—the intersubjective formation of self, identity, race and gender; racism, sexism, xenophobia, and competing conceptions of political responsibility.
Over the course of six decades, Piper has tirelessly denaturalized cultural norms of visibility and communication, subjecting them to a trenchant, and potentially transformative, critique. This exhibition comprises a multimedia zone for acts of looking and being looked at, of identifying and being identified, to unfold in the here-and-now of what Piper terms “the indexical present.”

In 1973, Adrian Piper defined a “mythic being” as “a fictitious or abstract personality” historically invoked to “explain or sanctify social or legal institutions or natural phenomena.”1 As the Mythic Being, Piper donned an Afro, reflective aviator sunglasses, and a drooping mustache to assume the guise of a cliché: an urban, macho persona familiar from the emergent genre of blaxploitation films. The artist’s Mythic Being works ranged from street performances, to newspaper ads, to oil crayon on photographs, to posters. Between 1973 and 1975, Piper collaged photographs of herself with excerpts from her diary in comic book-style thought bubbles, and reproduced these as paid advertisements in the gallery section of the Village Voice. The displaced private thoughts (both personal hopes—“I really wish I had a firmer grip on reality”—and pointed invocations of a racialized Other—“I embody everything you most hate and fear”) problematize the notion of fixed identity. Eliciting fears of miscegenation and black hypersexuality, the Mythic Being is, as Piper explains, “the personification of our subliminal hatreds and dissatisfactions, which blind and enslave us by being subliminal.”2 In confronting audiences with evidence of their own unconscious racism, the work creates opportunities for viewers to acknowledge and alter their attitudes.

Conceived and realized five years after the Mythic Being series, It’s Just Artcontinues Piper’s exploration of the themes of identity, subjectivity, and the ways in which what is assumed to be “essential” or fixed could in fact be subject to change in “the indexical present.” It’s Just Art is a multimedia installation rooted in the artist’s touchstone 1980 performance of the same title. In the original performance, newspaper images of the aftermath of the Khmer Rouge massacre in Cambodia were projected onto a large screen, over an image of Piper dressed now in double-drag as a femme personification of the Mythic Being in whiteface, observing both the performance and the audience. Projected over and partly obscuring the images of the Cambodia massacre were a series of fifteen thought bubbles directly addressing hypothetical audience reactions or possible interactions between the viewer, artist, and images. In front of the screen and adjacent to the sequential thought bubbles, Piper reprised her dance from Aretha Franklin Catalysis (1972) using dance not as a critique of Western decadence or apathy but as “an idiom of communication,”3 while two sound elements met in a similarly jarring way: Piper’s recorded voice is heard reading excerpts of an article on the Cambodia crisis as “Do You Love What You Feel,” a popular Funk ballad by Rufus and Chaka Khan, is played.
At Lévy Gorvy, the installation of It’s Just Art includes a video reconstruction of the sound and image components of the performance; fifteen framed silver gelatin prints; three thought bubble collages on black paper; one framed offset poster for the performance; and one framed diagram mapping the performance’s temporal structure. Representative of the formal complexity of Piper’s work of this period,It’s Just Art examines nuanced questions of political responsibility still urgent today and the complicit positions of art in relation to structures of power and violence.

The site-specific installation Here, conceived in 2008 and realized for the first time at Lévy Gorvy, consists of three laconic statements—“I was here,” “We were here,” “We are here”— engraved in Arabic, English, and Hebrew on three adjoining walls. Presented in a uniform font, the phrases quietly assert their seemingly timeless, carved-in-stone presence against the smooth expanse of their respective grounds. Activating a complex interplay of existential absence and presence, Here speaks to the intricacies of the indexical present, implicating the viewer in the here and now and inviting mindful attention to interpersonal dynamics.
Similar to the Mythic Being works and It’s Just Art, Here explores the ethical and moral dynamics of coexistence. The triangulation of English, Arabic, and Hebrew offers a subtle commentary on the entrenched ideologies of ethnic and cultural otherness that fuel contemporary violence, paranoia, and fear, while endeavoring to clear a space for mutual recognition and compassion. Language, Here reminds us, is not an innocent vehicle of expression, parallel to the presumed neutrality of the gallery’s white walls, but a series of conventions charged with politics. Positing a simultaneously inclusive and exclusive “we,” Here attunes its viewer to the dynamics of difference and similarity that both bolster bigotry and provide the means to overcome it.

Adrian Piper (b. 1948) is a first-generation Conceptual artist who started exhibiting her artwork internationally at the age of twenty and received a Ph.D. in Philosophy from Harvard University in 1981. She taught philosophy for 30 years. Her two- volume study in Kantian metaethics, Rationality and the Structure of the Self (2013) integrates desire into reason and standard decision theory into classical predicate logic. Her mixed media installation, The Probable Trust Registry, won the Golden Lion Award for Best Artist at the 56th Venice Biennale in 2015. Piper’s seventh traveling retrospective, Adrian Piper: A Synthesis of Intuitions 1965-2016, will open at the Museum of Modern Art, New York, in March 2018.