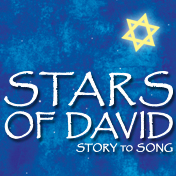 A Concert Presentation Celebrating The Stories Of

Based On The Book Stars Of David: Prominent Jews Talk About Being Jewish

Producer Daryl Roth, in association with Harbor Entertainment, has announced plans for a limited 5-week engagement concert presentation of the new show Stars of David, based on the highly acclaimed book, Stars of David by Abigail Pogrebin, from November 13 – December 15, 2013 at the DR2 Theatre (103 East 15th Street, at Union Square).  Featuring songs by some of the top composers and lyricist of the theater, Stars of David was conceived by Aaron Harnick and Abigail Pogrebin and is directed by Gordon Greenberg.  All tickets are $75 and can be purchased online at www.telecharge.com, or by calling 212-239-6200, or in-person at the DR2 Theatre box office (103 East 15th Street, Union Square).  For more information, please visit www.StarsOfDavidSongs.com.

This funny and captivating concert presentation features original songs by the finest composers and lyricists of the theatre.  This new musical adaptation, based on the best-selling book by Abigail Pogrebin, celebrates the identity of some of the most well know Jewish personalities including Marilyn & Alan Bergman (Award-winning lyricists of “The Windmills of your Mind,” “The Way We Were” and others),  Andy Cohen (Bravo Executive and Host of “Watch What Happens Live”), Gloria Steinem (Author, Feminist and Activist),  Kenneth Cole (Fashion Designer, Activist), Fran Drescher (Actress/Comedian, TV’s “The Nanny”), Edgar Bronfman Sr. (Former CEO of Warner Music Group), Aaron Sorkin (TV/Film Writer, “The West Wing,” The Social Network), Leonard Nimoy (Actor, “Star Trek,” Director), Justice Ruth Bader Ginsberg (Supreme Court Justice), Joan Rivers (Actress, Comedian, Host of “Fashion Police”), Tony Kushner (Playwright, “Angels in America”), Mike Wallace (“60 Minutes”), and Norman Lear (TV Writer/Producer, Creator of “All in the Family,” “The Jeffersons”), among others.

Abigail Pogrebin, a Yale graduate, is the author of Stars of David: Prominent Jews Talk about Being Jewish which went into eight hardcover printings. She is also the author of One and the Same: My Life as an Identical Twin and What I’ve Learned About Everyone’s Struggle to be Singular, and Showstopper, which chronicled her teenage adventure as part of the original Broadway cast of Sondheim’s, Merrily We Roll Along.  She’s been published in New York Magazine, The Daily Beast, Salon, Tablet, and The Forward, and moderates an interview series at the JCC in Manhattan.

Stars of David, a concert presentation celebrating the identity of some of the most well-known Jewish personalities, will play a limited engagement from November 13 – December 15 at the DR2 Threatre (103 East 15th Street, at Union Square) according to the following schedule: Tuesday at 7pm, Wednesday at 2pm & 8pm, Thursday at 8pm, Friday at 8pm, Saturday at 2pm & 8pm, Sunday at 3pm.  (Please note: there will be an additional performance on Monday, November 25 at 8pm.  There will be no performance on Thursday, November 28.) Tickets are $75 and can be purchased online at www.telecharge.com or by calling 212-239-6200, or in-person at the DR2 Theatre box office (103 East 15th Street, Union Square).  For more information, please visit www.StarsOfDavidSongs.com.