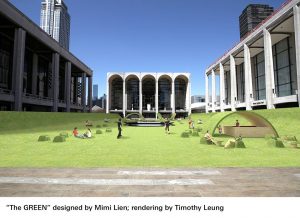 The Green, the newly renovated, redesigned and re-imagined plaza at Lincoln Center is set to open to the public on Monday, May 10, 2021. Open daily from 9:00 am to Midnight until September this year the area will serve as an outdoor performance stage for events taking place in the coming months.

Yours truly will be on hand to snap some photos and video. Stay tuned!

Below is the corresponding press release issued by Lincoln Center last month.

Lincoln Center for the Performing Arts today announced that Mimi Lien, celebrated set designer and MacArthur Genius grantee, has been commissioned to physically reimagine Josie Robertson Plaza as part of Restart Stages. “The GREEN” will transform the approximately 14,000 square feet of open, concrete expanse surrounding the Revson Fountain into an environment that invites New Yorkers to relax and enjoy the open space. 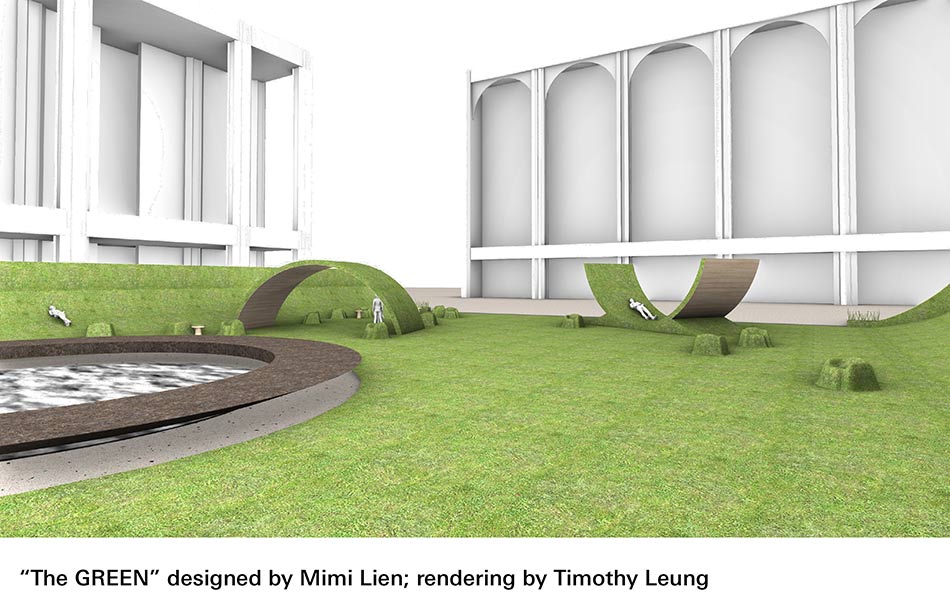 The installation acts as the physical centerpiece of Restart Stages, Lincoln Center’s initiative to help kickstart the arts sector and New York City’s revival. Restart Stages is part of the Stavros Niarchos Foundation-Lincoln Center Agora Initiative, a collaboration that reimagines and reactivates public space for a new era.

“When invited to consider how the physical space of Josie Robertson Plaza could be re-envisioned to be a more inclusive and inviting environment, I immediately thought that by changing the ground surface from hard paving stones with no seating to a material like grass, suddenly anyone would be able to sit anywhere,” said Mimi Lien.

Books will be available for borrowing provided by the New York Public Library for the Performing Arts; a small snack bar is planned for the northeast corner; and pop-up performances of all kinds will be offered throughout the summer and fall—including music, dance, and a series of family performances and workshops.

“The GREEN” will be constructed of recyclable, biobased SYNLawn, provided by SYNLawn New York. The grass-like material has a high soy content, fully sourced from U.S. farmers. Fabrication is being provided by Hudson Scenic Studio. 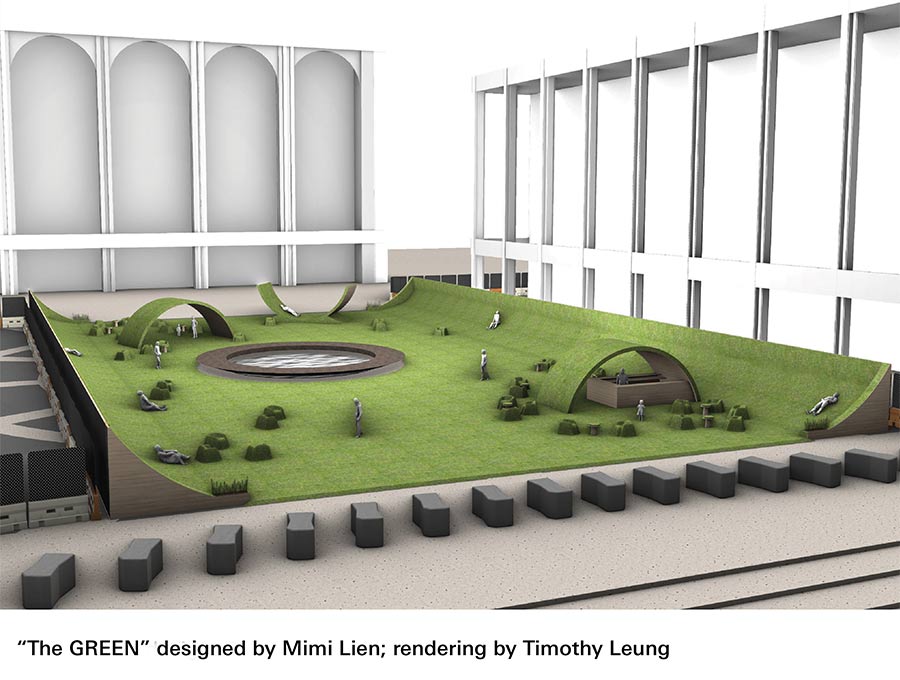 Lien continued, “In the past, Josie Robertson Plaza has been a space that you walk through in order to see a performance, to get to the Library, or even to admire the fountain for a bit, but I dreamt of making it a space of inhabitation, of pleasure, and of rest. I wanted to make a place where you could lie on a grassy slope and read a book all afternoon. Get a coffee and sit in the sun. Bring your babies and frolic in the grass. Have a picnic lunch with co-workers. I hope that this curved grass surface will feel like an embrace and an expanse at the same time, and will reimagine the Plaza as a site of social infrastructure, like a town green – a place to gather, a common ground.”

“The arts can be the centerpiece of New York’s economic, social, and spiritual revival—a powerful vehicle to reconnect as we enter the spring season,” said Henry Timms, President & CEO of Lincoln Center for the Performing Arts. “We’re thrilled to launch ‘The GREEN,’ a space for New Yorkers to re-energize, and find inspiration and uplift. We’re very grateful to Mimi Lien, our partners across Lincoln Center, and everyone across the city helping build this Restart Stages vision.”

“The GREEN” will be open May 10 through September 2021, 9 a.m.– midnight. A variety of safety protocols will be in place, following recommended guidelines as the public health situation evolves—including, but not limited to, required face coverings, social distancing, and regular cleaning of the space.

Restart Stages is made possible by the generous support of the Lincoln Center Board of Directors and the Stavros Niarchos Foundation (SNF) as part of the SNF-Lincoln Center Agora Initiative.

“Remaking this space is an invitation to New Yorkers to see their surroundings in new ways, to rethink public spaces so that they truly welcome and work for everyone. Making the familiar unfamiliar as a catalyst for necessary change is one of the most important roles art can play, and the Stavros Niarchos Foundation is very proud to be a part of this effort,” said SNF Co-President Andreas Dracopoulos, “We can’t wait to experience, along with everyone else in the city, what Mimi Lien and Lincoln Center create.”

As one of New York City’s leading arts institutions and an anchor of its cultural and public life, Lincoln Center is embarking on Restart Stages as a symbol of its commitment to the city, and to an equitable revitalization which elevates all New Yorkers. The initiative is a major, public-facing component of its broader effort to provide resources in this moment not just to Lincoln Center’s resident companies, but to the performing arts community as a whole — helping get artists back to work and supporting institutions from Brooklyn to the Bronx to engage their communities in the elevating power of the arts.

Designed with expert advice from medical and public health professionals, Restart Stages creates a safe, welcoming, accessible, and dynamic environment for arts and community organizations from across New York City, including Lincoln Center constituent organizations. All offerings occur outdoors with safety protocols in place for artists, audiences, and staff.

Adhering to accessibility guidelines, the grass-like SYNLawn, ramps, and curved elements are designed so that people with different levels of mobility can access the space. Cane detection for people who are blind or have low vision is integrated into the architecture.

At the close of Restart Stages, SYNLawn New York will upcycle “The GREEN” material to new homes on playgrounds for at-risk youth in upstate New York.

Restart Stages launched on World Health Day, April 7, with a special performance for healthcare workers by the New York Philharmonic. It has continued with a Blood Drive hosted in collaboration with the New York Blood Center; and pop-up performances by ensembles from The Juilliard School, Passion Fruit Dance Company/Tatiana Desardouin in collaboration with Works & Process, the Frank Sinatra School of the Arts, and puppeteer Basil Twist. The transatlantic exhibition, Faces of the Hero, a partnership with the Stavros Niarchos Foundation Cultural Center (SNFCC) will be on view beginning in July.

Additional events will be announced in the coming weeks. More information may be found here. Visit RestartStages.org for updates.

Mimi Lien is a designer of sets/environments for theater, dance, and opera. Arriving at set design from a background in architecture, her work often focuses on the interaction between audience/environment and object/performer.

In 2015, she was named a MacArthur Fellow, and is the first stage designer ever to achieve this distinction. In 2017, Mimi won the Tony Award for her design of Natasha, Pierre and The Great Comet of 1812.

Her large-scale public artworks include a building-wide installation for the Philadelphia International Festival of the Arts in 2011 (La Ville Radieuse), and 2016 (2×4 tree). Model Home, a performance installation in response to the housing crisis in San Diego, was commissioned for the 2017 Without Walls Festival at the La Jolla Playhouse. Her design work has been exhibited in the Prague Quadrennial, and her sculpture work was featured in the exhibition, LANDSCAPES OF QUARANTINE, at the Storefront for Art and Architecture.

She is the recipient of the Cullman Award for Extraordinary Creativity at Lincoln Center Theater, Bessie Award, Drama Desk Award, Lucille Lortel Award, American Theatre Wing Hewes Design Award, LA Drama Critics Circle Award, and an OBIE Award for sustained excellence. Mimi received a B.A. in Architecture from Yale University (1997) and an M.F.A. in Stage Design from NYU (2003). Mimi is an Artist-in-Residence at the Park Avenue Armory, and is a co-founder of the Brooklyn performance/art space, JACK.

About Lincoln Center for the Performing Arts

Lincoln Center for the Performing Arts is the steward of the world’s leading performing arts center, an artistic and civic cornerstone for New York City comprised of eleven resident companies on a 16-acre campus. The nonprofit’s strategic priorities include: supporting the arts organizations that call Lincoln Center home to realize their missions and fostering opportunities for collaboration across campus; championing inclusion and increasing the accessibility and reach of Lincoln Center’s work; and reimagining and strengthening the performing arts for the 21st century and beyond, helping ensure their rightful place at the center of civic life.