Long Island Set to Reopen on Wednesday, May 27 as part of PHASE ONE 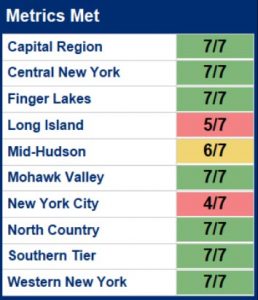 As announced by NY Governor Andrew Cuomo, the region of Long Island is on its way to a Phase One Reopening. The region is merely two metrics shy of meeting the total of seven needed for a reopening.

It’s lacking in the following areas in as far as the metrics are concerned:

Governor Cuomo today, “Long Island is on track to meet the numbers on Wednesday. We have to get the number of deaths down on Long Island and we have to get the number of tracers up, but we’re doing that. We’re preparing for long island to open. We’re getting the transportation system ready. The Long Island Rail Road is run by the MTA. They’re going to be cleaning and disinfecting all trains and buses every day, first time ever. We never disinfected buses and trains before, we never thought we had to. But we get it now, and they’re doing it every day. They’re going to add more cars to the trains so people can space out and socially distance when Long Island opens.”

To be noted, for those of you unaware, a reopening isn’t what many might think it to be. The phases of reopening begin with the simplest form with still limited social interaction.

Most of New York State has already entered that initial Phase. The Mid Hudson Region, as of this writing is expected to reopen early this week. After Long Island opens, New York City would be the last remaining area.

A Quick look at a recent timeline of the Governor’s statements over the past week:

Governor States that NYS on PAUSE will be extended until May 28 for all regions that do not reopen today – Western New York, the Capital Region, the Mid-Hudson Valley, New York City and Long Island. When a region meets all seven metrics required for reopening, that region may immediately enter phase one of reopening.

Long Island is making great progress. Long Island, we were losing about 100 residents per day. We’re now down to about 13 per day. When someone asks, “Well why did we go through all this pain for 2 months, 3 months?” Because we saved lives, that’s why. Because we saved lives. And if we didn’t do what we did, that number of 100 per day would have kept going up. That’s why we did what we did. Did it work? You’re darn right it worked. We’ve saved many, many lives and you look at the curve in New York versus the rest of the nation, we’re going down, many parts of the nation, the curve is still going up.

Nassau County is now eligible for elective surgery and ambulatory care. Anyone who needs health service should get it.

Governor Cuomo also announced the Long Island and Mid-Hudson Valley Regions will be permitted to begin construction staging in anticipation of phase one of reopening. If the number of deaths continues to decrease and the tracing is online, both regions could reopen next week.

On Long Island, the number of deaths is continuing to drop and contract tracing is coming online, and if this trend continues Long Island could be ready to open by Wednesday, May 27th.