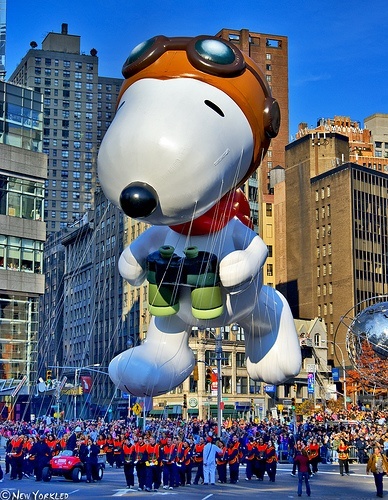 Red, from “Angry Birds,” returns for his second Parade, clutching an egg containing one of the adorable baby Hatchlings made famous in this past summer’s hit blockbuster film, *The Angry Birds Movie*, which is returning to theaters for Thanksgiving.

Good Grief, indeed! PEANUTS loveable blockhead Charlie Brown takes center stage during his debut flight this Thanksgiving. As he makes his way down the route hopelessly trying to fly his favorite kite, audiences are sure to hear that famous frustrating exclamation, as Charlie Brown battles to untangle himself from the kite’s string and tail.

DIARY OF A WIMPY KID®

AMULET BOOKS, AN IMPRINT OF ABRAMS THE ART OF BOOKS

Greg Heffley, star of the “Diary of A Wimpy Kid” book series, returns to the Parade in colorful splendor. Ready for the winter and clumsily celebrating the release of the #1 bestseller “Double Down”, Greg clutches his “journal” as he catches air and trips down the Parade route.

Sinclair Oil’s classic DINO (pronounced die-no) balloon will return to the Parade in 2016 in honor of Sinclair’s centennial celebration. Dino first appeared as a 70-foot long giant balloon in the 1963 Macy’s Parade and flew until 1976. The original balloon became an Honorary Member of the Museum of Natural History in 1975.

Fun Fact: This Apatosaurus will join the line of march as the only life-sized balloon in the Parade.

THE ELF ON THE SHELF®

Fun Fact: At 64-feet tall, The Elf on the Shelf is the tallest character balloon in the Parade.

Supercute superstar Hello Kitty returns to the Big Apple in her classic retro airplane, wishing all of her friends a Happy Thanksgiving. This year Hello Kitty celebrates her 10th Parade march bringing happiness to her millions of fans.

ICE AGE’S SCRAT AND HIS ACORN

ICE AGE’s superstar squirrel, Scrat, returns to chase his elusive acorn through New York City for his second Parade flight. An undoubtedly tasty treat for the prehistoric taste buds, will fate and Parade fans let him catch it this year?

Everyone’s favorite bear returns to New York for his third Parade flight down Manhattan. Wearing his trademark red hat and blue duffle coat, Paddington will once again grace the big screen next year in Paddington 2.

Fun Fact: Paddington, who first appeared in the Parade as a Falloon (a cold air balloon, riding on a float) in 1990, carries a helium suitcase that is as big as a two car garage.

Pikachu returns to the Macy’s Thanksgiving Day Parade with an electrifying appearance as part of the Pokémon brand’s 20-year celebration in 2016. The globally adored yellow Pokémon is bundled up in a warm scarf for the chilly New York weather, a significant change in scenery from the tropical Alola region featured in the upcoming video games Pokémon Sun and Pokémon Moon. Pikachu also carries a “Snowman Pikachu” through the city to usher in the holiday season.

Fun Fact: While the Pikachu balloon is larger than life, in reality, Pikachu is 1-foot, 4-inches tall.

Back this year to inspire bakers across the country, the classic Pillsbury Doughboy celebrates the holiday at Macy’s with millions of Americans as they enjoy his giggle and home baked holiday treats.

Fun Fact: It would take more than four million crescent rolls to create a dough-sized version of the balloon.

In advance of the highly anticipated feature film, Saban’s Power Rangers, hitting theaters this spring, the Red Mighty Morphin Power Ranger will once again dominate the skies of New York inspiring millions to reimagine what it means to be an epic superhero.

Fun Fact: The larger than life Red Mighty Morphin Power Ranger is the longest balloon in the Parade. Just one of his arms is the size of a standard school bus!

The world’s most famous clown will once again celebrate the season of thanks as he soars through New York City. Marching down the Parade route, Ronald McDonald spreads holiday cheer to audiences across the country with a larger than life thumbs up!

Eruptor returns to the Parade for his third New York City flight in 2016. While controlling his natural instinct to erupt and spew lava over the streets of New York City, Skylanders Eruptor will fly high, delighting fans of all ages with his 25-foot smile.

Fun Fact: Eruptor’s flame was created from more than 40 gallons of florescent paint and 5 barrels of glitter!

The one and only pineapple-dwelling sea sponge, SpongeBob SquarePants joins the celebration for his 11th Parade appearance. Dressed in festive holiday gear, SpongeBob is ready to ring in the holidays with millions of fans from Bikini Bottom to New York City.

Fun Fact: SpongeBob SquarePants was the first-ever square balloon in the Parade and is pulled into his signature shape by more than 800 internal tie-lines.

Thomas, the adorable blue engine from the Thomas & Friends™ animated series, is once again making a special holiday trip from the island of Sodor to chug through the New York City route of his 3rd Macy’s Thanksgiving Day Parade.

Fun Fact: Thomas is the Parade’s largest balloon by helium volume and the high flying creation that contains the most balloon fabric ever used to design one character.

Making their Parade debut, Poppy, Branch and Guy Diamond hitch a ride down the streets of Manhattan on Caterbus. Fresh off their blockbuster hit film, DreamWorks’ Trolls, the entire hair-raising crew will travel the route, spreading color, joy and cheer for a nationwide audience.

Cue the duck! The most affable spokesduck in history, the Aflac Duck returns to the Parade route to create another holiday frenzy of laughter.  While he skates through New York City, audiences are sure to hear his signature call, “Afflaaac”.

Our number 1 guy! Felix the Cat, the first-ever character balloon in the Macy’s Parade returns to help celebrate the 90th march this year. Modeled after the original 1927 design, he has also been constructed using the same techniques used in the 1920’s. Sure to make a dapper return to form, Felix will be  carried on poles in the same fashion as the first balloons featured in the third edition of the Macy’s Parade in the roaring 20s.

Fun Fact: While the new balloon will be mostly inflated with air to mimic the original form, Felix ever the gentleman, will also be inflated with just a touch of helium to help make the trip down to Macy’s a bit lighter for the his flight team.