Reinvented to safely keep spectators in New York City at home and families nationwide glued to their televisions, the 94th edition of the iconic event ushers in the holiday season with a televised celebration featuring giant character balloons, animated floats, incredible street performances, musical acts, and the one-and-only Santa Claus

Macy’s Thanksgiving Day Parade airs nationwide on NBC and Telemundo on Thursday, November 26, 2020 from 9 a.m. – Noon, in all time zones 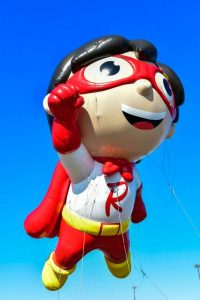 As a national tradition that has annually marked the start of the holiday season, the Macy’s Thanksgiving Day Parade holds a unique place in the hearts of New Yorkers and the nation. In order to produce this event safely during this challenging time, the Macy’s team along with its partners in the City and State of New York, reimagined the celebration as a television-only event. This resulted in the elimination of the traditional 2.5-mile route, scaling back of elements and scheduled performers and reducing the overall number of participants, among other changes.

This year, the Parade will be produced in a closed tv-set format over the course of several days leading up to and including Thanksgiving to ensure the safety of participants and staff. Safety is Macy’s top priority and robust health measures have been implemented across all areas of the production including COVID-19 testing, wellness checks, required masks and social distancing practices. In constant communication with government agency and health experts, several contingency plans were developed allowing the production the ability to adjust plans based on the evolving environment and any subsequent restrictions, to ensure the health and safety of all involved.