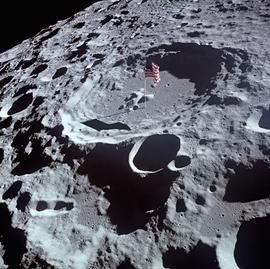 (New York, N.Y.) February 19, 2015 — Artist Marco Brambilla has created Apollo XVIII, an ambitious video installation that weaves archival footage from real NASA missions with computer-generated imagery to present a countdown of a fictional Apollo mission to the moon. It will be shown on Times Square’s electronic billboards from 11:57 pm to midnight each night in March as part of Midnight Moment, a monthly presentation by The Times Square Advertising Coalition (TSAC) and Times Square Arts. The March presentation is in partnership with Michael Fuchs Galerie.

Apollo XVIII re-interprets mankind’s relationship to space exploration in the electronic age. At the close of the Apollo program and the dawn of journeys to Mars, as expedition technologies segue from hybrid manned-electronic to virtual models, the NASA Program acts as a metaphor for the shift from physical to surrogate modes of exploration.

Apollo XVIII presents the countdown to an imagined lift-off of a Saturn V rocket on dozens of Times Square’s spectacular screens. The fictional mission combines both real, archival footage and virtual renderings to present a new collective viewing experience that will place the public at the foot of a new frontier.

Tim Tompkins, President of the Times Square Alliance, said, “Marco Brambilla’s piece reminds us of Times Square’s place at the cutting-edge of technological innovation and cultural exploration. Apollo XVIII will immerse Times Square in the future of space travel and bring the neighborhood to new heights through its innovative imagery.

Sherry Dobbin, Times Square Arts Director, said “Marco Brambilla’s mythical mission combines the memory and romance of past space travel with the frightening velocity of the rocket and the futuristic landscapes of new, undiscovered territories. Only in Times Square can one recreate the scale and magnitude of such an experience.”

Fred Rosenberg, President of the Times Square Advertising Coalition, said, “The high-tech digital screens in the Crossroads of the World are the perfect platform to display this virtual mission to outer space.”

Marco Brambilla, artist, said “The space age represented a landscape of optimism, capturing the imagination of the public. With Apollo XVIII I hope to recapture the golden age of manned space travel as a spectacle presenting Times Square as the virtual launch site.”

Michael Fuchs Galerie, partnering organization, said “Galerie Michael Fuchs is proud to support Apollo XVIII, the most ambitious project yet from Marco Brambilla: a fabricated mission of iconic moments from past and present, extrapolating a virtual experience of the future. Apollo 18 asks the question: is this a real mission, is it fact or fiction?”

The following digital screens are participating in the March Midnight Moment:

Marco Brambilla is a Milan-born, New York-based video collage and installation artist, known for his elaborate re-contextualizations of popular and found imagery. His work has been exhibited in major collections worldwide including the Kunsthalle Bern, The Guggenheim Museum, the San Francisco Museum of Modern Art, the ARCO foundation, Madrid, and the New Museum of Contemporary Art, New York. His video installations have been screened at Venice Film Festival (2011) and the Sundance Film Festival (2012), and in May 2011, In early 2015, Brambilla will be showing the Megaplex series Fondation Beyeler, Basel and the Contemporary Art Museum, St.Louis.