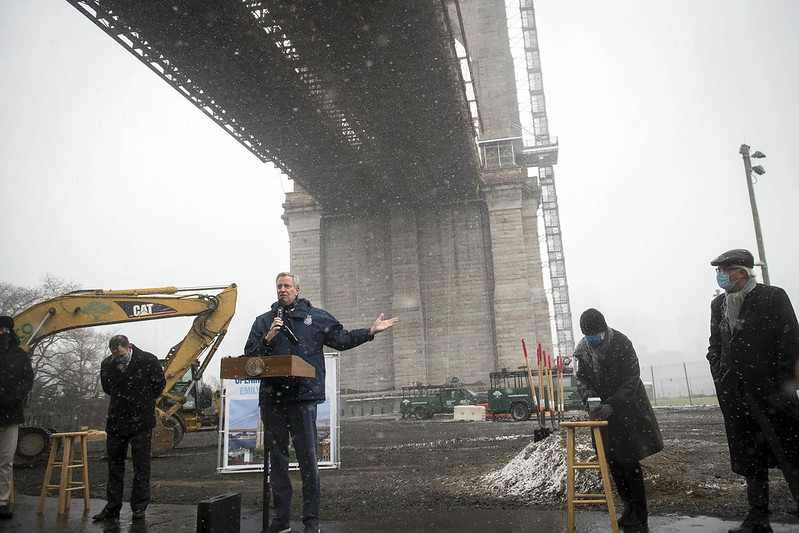 Photos provided by the Mayor’s Office can be found near the bottom of this page.

Mayor Bill de Blasio: Thank you. Everybody it is delightful to gather with you, this lovely weather but it is for such a good and warm cause. It’s cold weather but we are here, feeling the warmth of something really great we’re doing together today. And Eric is right – Eric, thank you for your extraordinary leadership over years making this park better and better. But I want to tell you, this today, this is joyous for me because I was involved with an amazing group of Brooklynites decades ago who envisioned this park and fought for it. And we really had to fight for it. There was actually a lot of opposition to creating Brooklyn Bridge Park. But it turned out to be one of the most beautiful egalitarian, amazing, moving parts of Brooklyn, something new that made Brooklyn the center of the universe – already the center of the universe, Brooklyn got even better because of Brooklyn Bridge Park. But Brooklyn Bridge Park is not finished. This is the last frontier. This is the last great piece that has to happen. Two more acres and this park reaches 85 acres. And so, I wanted to be here today to say thank you to everyone who fought for this park, everyone who worked for this park, and to see this last piece coming together. Quick thank yous. Deputy Mayor Vicki Been, thank you for your leadership. Victor Calise, who does an amazing job running the Office for People with Disabilities. Senator Kavanagh, Council Member Levin, but especially Chris Roebling. That history is beautiful, that here American history changed because Emily Roebling showed something that people needed to see about the power and talent and ability of women. This park, this section right here, is going to help us understand how we progressed in yesteryear, but we have to progress again now in this time.

And this is the last thing I want to say, this is an example of what New York City is all about. First, the bridge itself, a miracle in its time, couldn’t be done anywhere else. It could be done in Brooklyn. It could be done in New York City. Long ago, we learned a lesson. Generations ago we learned a lesson about the power and ingenuity and energy of New Yorkers. They built this bridge and the world marveled. And at the same time, they proved that we can have fairness and equality, and Emily Roebling was the example of that in this city, where the suffrage movement took root, where so many fights for civil rights had progressed, where the LGBT movement was born. This is a city that does great things, that creates great things, but also creates fairness and justice. And we have to do it again in 2021 and the years beyond. So, I’m also here today because I wanted you to see something being built in New York City that is an example of our rebirth. This is another step towards something greater for this city. And to everyone who’s been a part of it, thank you for what you did before but thank you even more for what you will do in the years ahead. Thanks, everybody.