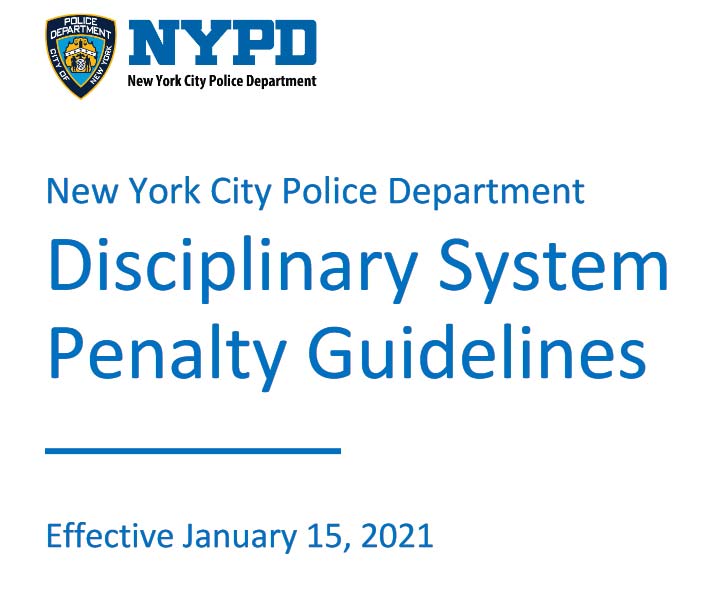 “For years, we have achieved major police department reforms and today’s announcement is just the start for the progress we will make together as a city in 2021,” said Mayor Bill de Blasio. “With this new cutting-edge reform, the Police Department now has clear, fair and just discipline guidelines. This is about accountability, building trust and ensuring community engagement is centered in our approach.”

“This matrix, almost two years in the making, establishes clear and consistent presumptive penalties for specific offenses and eliminates the perception of favoritism or bias that can undermine our discipline process, as well as the department’s legitimacy in the eyes of the people we are sworn to serve and protect.  Moreover, the matrix reflects my commitment that every member of the service is held accountable for his or her conduct based upon reasonable standards. The matrix is meant to be a living document, open to further improvements as the needs of the police and the public naturally evolve,” said Police Commissioner Dermot Shea.

“We appreciate this promising step the NYPD has taken to outline clearer rules of the road for their uniformed members of service,” said CCRB Chair Fred Davie. “The Board looks forward to reviewing the Department’s proposal, and engaging further with the public on the disciplinary matrix.”

The matrix outlines presumptive penalties for instances of officer misconduct, which may be adjusted up or down in a set window based on aggravating and mitigating factors. Penalties escalate with repeated offenses. The reforms aim to increase fairness in the disciplinary system, and increase trust in the system among both members of the NYPD and the public, by improving:

Accountability with penalties that are fair and proportional to the misconduct.

Transparency, so that both members of service and the community know what discipline to expect when an officer breaks the rules.

Consistency, so similar actions are treated similarly, and there is greater concurrence between the CCRB recommendations and NYPD decisions on penalties.

The discipline reforms are part of Mayor de Blasio’s plan to fulfill the Obama Foundation Reimagining Policing Pledge. The pledge, in partnership with the My Brother’s Keeper Alliance, calls for Mayors to review, engage, report and reform. That multi-step process allowed the City to bring true community input into the formation of the discipline guidelines.

On August 30, 2020, NYPD released the draft disciplinary matrix for public comment. Feedback and input were solicited from the Department’s oversight organizations, as well as community and advocacy organizations. Over 400 comments were received and resulted in changes to strengthen and better adapt the guidelines to better reflect New Yorkers’ experiences.

The discipline guidelines are clear and simple to interpret for officers and community members alike. For example:

Any penalty could increase if there are aggravating factors like time allowing for deliberate reflection before the action, or if its motivated by personal interest.

All presumptive penalties can be viewed in the final Disciplinary System Penalty Guidelines here.

NYC Public Advocate Williams: From Infection to Injection – A Failure of Leadership Across the Board

NYC Public Advocate Williams: From Infection to Injection - A Failure of Leadership Across the Board That which is provided on this page is a...
Coronavirus

NYC Public Advocate and Others Ask DOJ to Investigate COVID-19 Racial Disparities "The zip codes in our city who have seen the highest rates of...

NY State COVID-19 Health Indicators Look Promising As Numbers Continue to Drop The COVID-19 health indicators from the past weeks (which are shared on a...