Mayor de Blasio, There are Still iPads For any Student Who Needs One!

NYC Mayor Bill de Blasio says there are still iPads available for NYC school students who need them online schooling. He would make the announcement during today’s COVID-19 Press Conference, during which he allotted a great deal of time speaking of NYC’s School System. This is a follow-up to the announcement of 300,000 iPads being obtained for students. That took place in March following the citywide School closures, due to the health crisis.

“In the middle of this pain, there’s been a chance to really deal a blow to the digital divide. To fight back against that divide and put technology in the hands of lots of kids who never had it – and so, the iPad deliveries. The latest and best iPads delivered to the homes of so many kids who didn’t have access before. We said that for every single child, who we knew needed one, would get that delivery by the end of April and that is precisely what is happening. Right now, 247,000  iPads have either arrived at the homes of the students or are in the process of being shipped to them as we speak.”

The Mayor would go on to compare the numbers of students who’ve received these devices to the number that are within the entire Houston School System. He’d mention how the order placed was for such a big supply that there are still kids who’ve not requested an iPad.

“We had an order for a bigger supply. That means there are some kids who still have not come forward and families that’ve not come forward. I’m saying that with empathy. I want you to come forward. If you, for any reason, or anybody in your life, anybody watching or listening – a kid who needs that iPad, doesn’t have that technology at home. Needs that access and still hasn’t asked for it. All you have to do is pick up the phone and call 311 – or you can go to schools.nyc.gov and we could ship it and have it to you in days.”

Mr. de Blasio clarified that any student would be served whether they called today, tomorrow or in a week. He would also congratulate and thank the DOE as well as those in the private sector for the accomplishment of having provided a quarter of a million kids with iPads, with Internet Service attached, in a matter of weeks.

Back on March 16 we reported how NYC and its Department of Education (DOE) was working with Apple on obtaining 300,000 iPads for NYC students who did not have the digital resources needed to pursue online learning. A plan brought into place after the entire NYC School System was shut down due to the COVID-19 Pandemic. 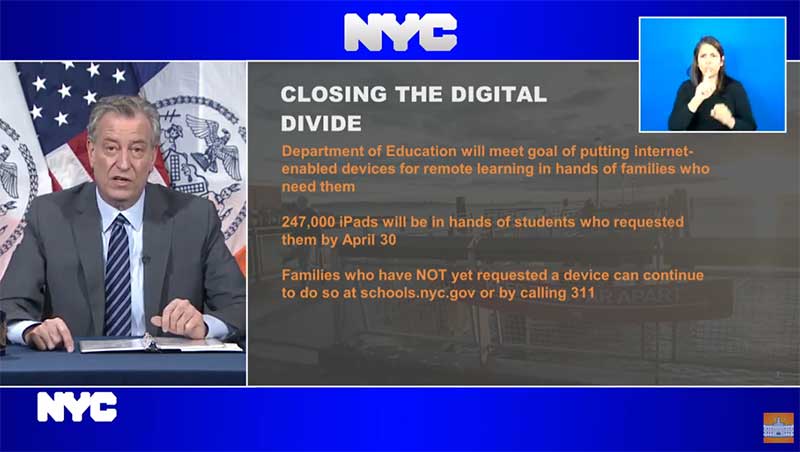