Story and videography by Luis Diaz

On November 24, 2021, the eve of Thanksgiving and the big Macy’s Parade, NYC Mayor Bill de Blasio, Police Commissioner Dermot Shea and Macy’s CEO Jeff Gennette held a press conference at the inflation of the hot air balloons which were set to float in the parade the following day.

On the afternoon of the annual Macy’s Thanksgiving Day Balloon Inflations, the Mayor spoke in front of the iconic Macy’s Star Balloons.  Mr. de Blasio heralded the return of one of the nation’s most highly anticipated seasonal events, the 95th Macy’s Thanksgiving Day Parade. It would be the first in person event since before the COVID-19 pandemic hit our city early last year in 2020.

“It is beautiful to have this parade back full strength,” said the Mayor. “It’s going to be a magical, magical moment. The weather is cooperating. I’m knocking on wood. The weather is cooperating for tomorrow, so it’s looking good all around. And we have amazing balloons. And every year, there’s new, exciting balloons. And so, for everybody – this is going to be something for everyone, literally.”

Also on hand was NYC Police Commissioner Dermot Shea and Macy’s CEO Jeff Gennette who each spoke as well.

Later they would pose for cameras as they walked amidst balloons whilst they were inflated.

The inflation of the balloons is attended by a great many tourists and New York natives every year. Often to the point of shoulder to shoulder crowds. Yours truly has been there in the past and it’s all too likely due to the pandemic as well as concerns over the Omicron variant of the virus that the numbers present this year were nowhere near what we’ve seen in the past.

Following is a video and photos from the event following a transcript of what was spoken by all three men. 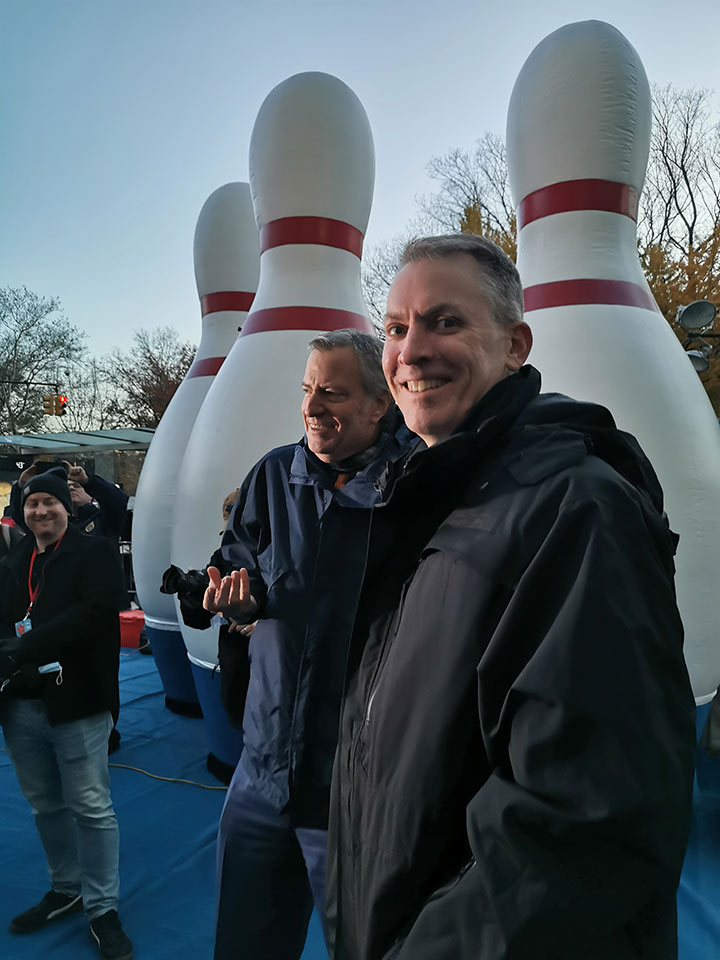 Snoopy’s inflation is not quite there 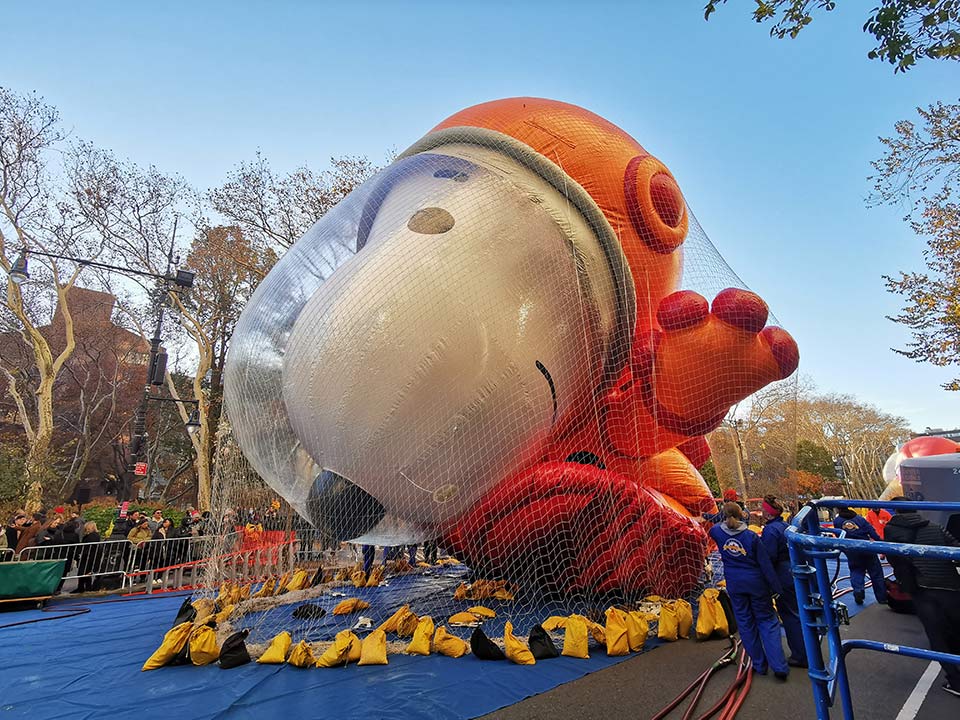 Inflation of the Balloons on the Eve of the Big Parade 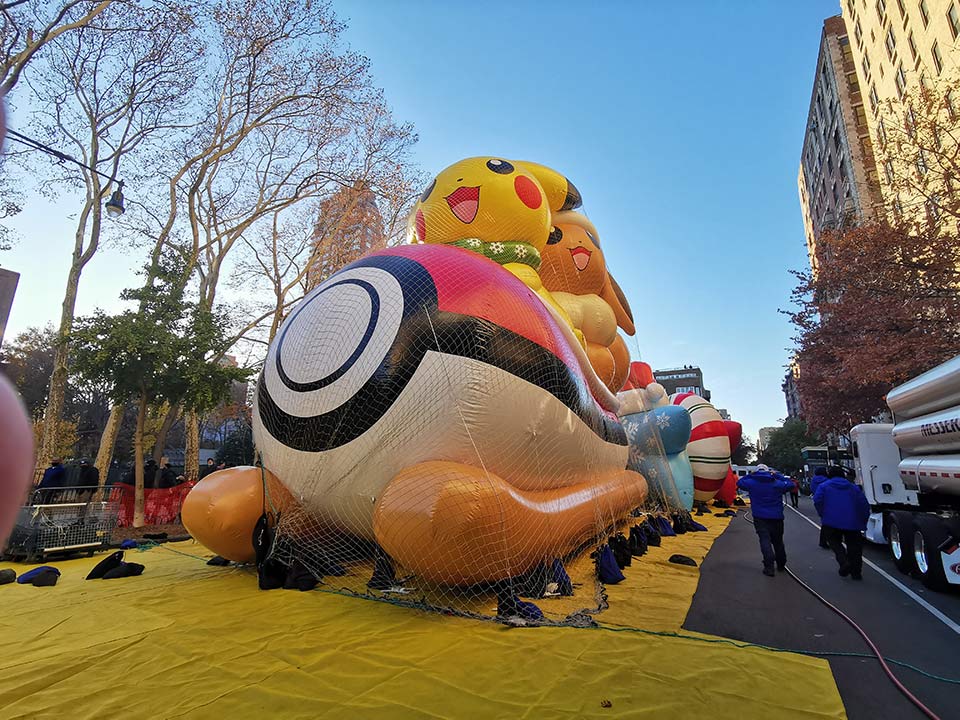 Mayor Bill de Blasio: This really one of the very best things that happens all year in New York City. And I want to thank everybody at Macy’s. You are amazing partners. Jeff, I’ve got to tell you, you and your team, you do so much for New York City. I want to thank you for that. And this is a labor of love every year. It’s such a beautiful thing. So, listen, these balloons, just for people to come and see them pumped up, the families come out, kids come out, it’s absolutely beautiful. And then, the parade itself is one of the best moments of the whole year. And it is also a moment where the whole nation looks to New York City and sees the greatness of all New Yorkers and this place on display. It’s a very proud moment every year for New York City. And it’s especially proud after what we’ve been through the last couple of years.

It is beautiful to have this parade back full strength. It’s going to be a magical, magical moment. The weather is cooperating. I’m knocking on wood. The weather is cooperating for tomorrow, so it’s looking good all around. And we have amazing balloons. And every year, there’s new, exciting balloons. And so, for everybody – this is going to be something for everyone, literally. And it’s going to be safe. You’re going to hear from the Commissioner in a moment. It’s going to be safe, because the NYPD is going to be out in force. The plans are fantastic. And we’re happy to report, everything is going very, very smoothly. It’s going to be safe because, people have gone out and gotten vaccinated in this city in a way that surpasses almost every place else in the country. It’s something to be proud of. And we welcome people, come out tomorrow, dress warm, be safe, and experience one of the most beautiful things that happens every year in New York City.

The Macy’s Thanksgiving Day Parade is back. It’s something to be proud of. It’s something to be excited about. And I’ve got to tell you, Macy’s, once again, after eight years of working with you guys, you are supreme professionals. You do everything the right way and you love this city. And I’ve got to tell you, that means so much to all of us. So, I want to thank you on behalf of 8.8 million New Yorkers. Jeff, to you and everybody at Macy’s, once again, job well done. Thank you for all you do for us. It’s my great pleasure to introduce the CEO of Macy’s Jeff Gennette.

CEO Jeffrey Gennette, Macy’s: Thank you, sir. Alright. Thank you, Mayor. And thanks for everybody for being here today. So, on behalf of everybody, the 100,000 strong at Macy’s, all of our colleagues both here in New York City and across the country. Welcome to balloon inflation. And this is the 95th Annual Macy’s Thanksgiving Day Parade. So, we are hours away from the start of this world spectacle that we do every year. And this is the official kickoff of the holiday season. So, we’re thrilled to bring back this cherished tradition from here on the Upper West Side, going all the way to our flagship at 34th Street. This is in very close partnership with our partners in New York City, as well as the State, and all the agencies. And it gives us the opportunity to bring magic to New York, as well as the country.

So, in this partnership we share values. We share values of community and celebrating the milestones and traditions that we serve. So, as this is the end of your term, Mayor, we’ve worked together closely over the past eight years. And I would say the last two have been quite remarkable, in that using the opportunity on the July 4th, and here on the parade, no matter what was going on, to make it work. And I thank you for your partnership on that. We brought a New York a lot of joy. And especially this year, as we re-entry, and have recovery, and revitalization of this beloved city that we love to be a part of. I’d also like to thank the Commissioner. And Commissioner Shea, I mean, your amazing team that keeps this community safe, we love working with you as part of the Macy’s group. And so, thank you for your leadership on that. I’d love to be able to also talk about the thousands of city colleagues in New York City that help us pull off this parade, as well as the amazing colleagues at Macy’s. It wouldn’t be without – we couldn’t do it without them.

So, let me tell you a little bit about this year’s parade. It’s going to be pretty magical. So, you’re going to see, if you walk this, a lot of our new character balloons. So, we have the Funko Pop, which is – think about Baby Yoda from Mandalorian, so that’s like at the very front. Go take a look at that. We have amazing new floats. So, we have the Disney Cruise Line, as well as Kalahari, with all the Disney characters are going to be on that. Great entertainers are lined up.

So, Carrie Underwood is the headline. We’ve got John Batiste, for those of who know him. He basically just got nine – or, 11 Grammy nominations. He’s going to be with us. We’re going to have Kelly Rowland, Foreigner, just packed with entertainment. We’ll have 16 character balloons. We have 36 novelty balloons. We’ve got our new one called Tiptoe. It’s going be the first walking balloon puppet. It’s 18 feet tall, get ready for that. And that’s going to be visiting the crowd all the way through the route. We have 28 floats, 1,200 cheerleaders and dancers, 10 marching bands, 800 clowns. And as well, for the fifth year in a row, we’re going to have the Macy’s singing Christmas tree, which is packed with amazing Macy’s colleagues from across the country, singing their hearts out for America. And then, of course, it wouldn’t be complete without Santa Claus – the only real Santa Claus – and he’ll be here on 34th Street to usher in the holiday season at the end of the parade.

So, as we all go to sleep tonight, this amazing parade team that represents Macy’s is going to pull all this together and we’re going to be ready for kickoff on a beautiful day at nine o’clock tomorrow morning. So, happy Thanksgiving on the behalf of Macy’s, to everybody here. And, Mayor, I’m turning it back to you.

Mayor: Thank you so much, Jeff. And, Jeff, I want to just tell you, as you said, the 4th of July, especially in 2020, when this city was going through so much, Macy’s did so much to give people hope and spirit. And you guys have just been absolutely fantastic partners. So, a lot of work’s going to happen between now and tomorrow morning. And a lot of work is going to be done by all the City agencies, but I want to highlight and thank the men and women of the NYPD who are keeping us safe. I want to emphasize, there are no – no specific and incredible threats against this parade and against New York City. That’s the very, very good news, very important news. But to hear about all the extraordinary preparations that are being made and the work that’s being done to keep everyone safe, my pleasure to introduce our Police Commissioner Dermot Shea.

Police Commissioner Dermot Shea: Evening, everyone. What a difference a year makes. Here we are, the start of my favorite time of year in New York City. You can feel the energy. To Macy’s – Jeff, can’t thank you enough for what you do, everything you do. Macy’s as an institution near and dear to the hearts of all New Yorkers. And this parade and what it represents, it’s just exciting to be out here. You are going to have thousands and thousands of men and women in blue. I see Phil Rivera, the two-star Chief in charge of Manhattan North over there. Steve Hughes, Juanita Holmes, Martine Materasso, all working throughout the night and through tomorrow to make sure that you can have the greatest possible day tomorrow. All you have to do at this point is two things – dress warm and get out here early tomorrow. Bring the energy. We’re going to have a great day. Thank you.

Mayor de Blasio: Everyone, listen, come on out. It’s going to be an amazing moment, part of the rebirth of this city. We are leaving. COVID behind. We’re moving forward. Everyone, have a beautiful Thanksgiving. Thank you very much.